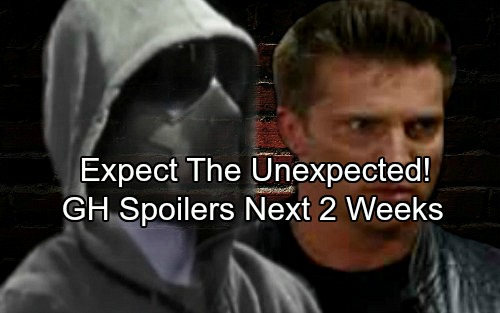 General Hospital (GH) spoilers for the next two weeks tease that some surprises are on the way that will shock fans. The week of September 18-22 will bring some major revelations. In addition to Steve Burton’s first day back, Franco (Roger Howarth) will realize he’s been lied to. He’ll have an epic outburst as he processes news about his past.

Liz (Rebecca Herbst) will also have an alarming encounter in the week ahead. She’ll do her best to stay calm, but she’ll definitely feel threatened. Will Sam (Kelly Monaco) be to blame or is something more sinister about to go down? Speaking of Sam, she’ll make time for a chat with Sonny (Maurice Benard). It sounds like the mobster is still battling some guilt about Jason’s (Billy Miller) fate.

Meanwhile, Lulu (Emme Rylan) will have a change of heart about Valentin (James Patrick Stuart). After an enlightening conversation, Lulu may think there’s some good in Valentin after all. In St. Petersburg, Ava (Maura West) will remain on edge. Her nosiness could leave her in a real jam pretty soon.

Other General Hospital spoilers say Nelle (Chloe Lanier) will get some advice she wasn’t expecting. This could give her a new perspective on her future with Michael (Chad Duell). Later, Carly (Laura Wright) will rip into her son for ignoring Nelle’s shady past. She’ll think Michael’s a fool for buying Nelle’s side of the story.

Michael won’t care what Carly thinks and he’ll be sure to let her know it. GH fans will see Michael take a leap of faith for Nelle. After Michael makes a stunning move, Nelle will react during the week of September 25-29. She’ll be a bit rattled at first, but Michael will convince her that this calls for a celebration.

What does Michael have up his sleeve? Is he really proposing already or could he suggest they officially move in together? Deciding to take a trip is another option. That would certainly be risky on Michael’s part. Leave the kayaks at home!

Elsewhere, Felicia (Kristina Wagner) and Mac (John J. York) will get a shock. Nathan (Ryan Paevey) will also find himself consoling Amy (Risa Dorken) after things fall apart. Those General Hospital spoilers point to the exposure of Man Landers’ identity. It looks like Maxie (Kirsten Storms) will be at least partially responsible for Amy’s pain.

Across town, Franco will be sworn to secrecy. He’ll have a heart-to-heart with Scott (Kin Shriner) anyway, so maybe he’ll get some support. Franco could use someone to lean on thanks to all the Jason twin drama. There’s a good chance his new secret will be tied to it.

Sam (Kelly Monaco) and Monica (Leslie Charleson) will have Jason on their minds, too. They’ll meet up to discuss Jason’s long-term care facility and their fears about what’s to come. We’ll give you updates as other GH details emerge. Stay tuned to the ABC soap and don’t forget to check CDL often for the latest General Hospital spoilers, updates and news.