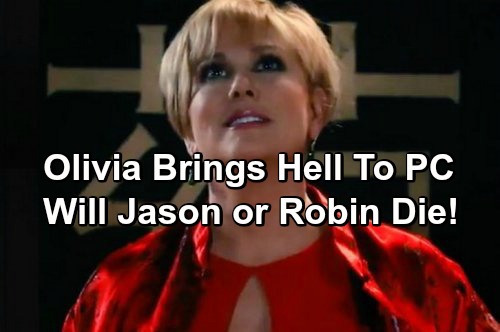 General Hospital (GH) spoilers tease that we’ll soon find out more about Olivia Jerome’s (Tonja Walker) evil revenge plans and she’s got Jason Morgan (Billy Miller) and Robin Scorpio (Kimberly McCullough) in her sights. Here’s a look at what Olivia is up to and why she’s so furious.

Olivia mentioned to Julian Jerome (William deVry) that she’s been in exile for a long time. Today, Tonja Walker shared on Facebook the backstory she’s created for her character – whether or not this coincides with the GH writers’ vision isn’t clear, but it’s compelling.

Tonja said she is playing Olivia as if she was saved from death by her father Victor’s pals and then subjected to “torture, isolation, mind control, were used to make her do the bidding of the Chinese and Russian mob. Instead of taking care of her she was tortured and isolated, imprisoned and blackmailed.” 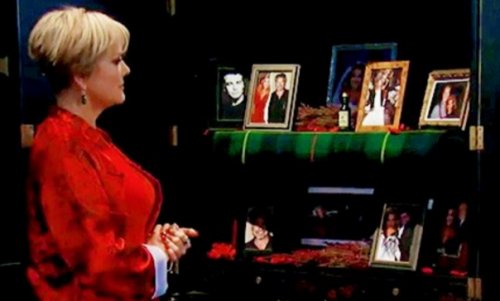 We saw Olivia talking to her armoire of atrocities featuring stalkerish photos of Duke Lavery (Ian Buchanan) and Anna Devane (Finola Hughes) where she had carved out Anna out of the pics and pasted her own lunatic face in there. She even did it to Duke and Anna’s wedding photo.

Olivia is off her rocker and rattled off some of her revenge plans – she’s ready to make Julian and Anna both pay. She sees that these are the two responsible for taking Duke from her. Anna stole him away and then Julian murdered her beloved Duke. Time has not chilled Olivia out.

Olivia told Julian to kill Jason but he refused. Julian offered Olivia an alternate plan to achieve her goals without killing Jason. She agreed, but that was just to get Julian to shut up. Olivia has plans for Jason and knows hurting him will keep Sam Morgan (Kelly Monaco) estranged from her dad. 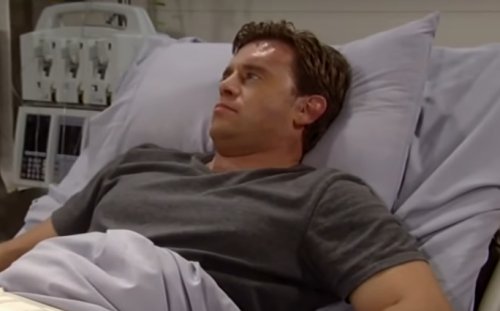 GH spoilers reveal that by the middle of next week, Jason is critically sick and hospitalized. A few days later, Sam frantically searches for her husband at GH. This isn’t a seasonal flu bug – some spoilers are swirling that Jason will be poisoned by Olivia and must be rushed for treatment.

Olivia hinted at her proclivity for poisoning when she scared Julian into thinking little Leo had been aspirin poisoned. He wasn’t – they were just sugar pills – but Olivia may try it for real with Jason. Winston Rudge (David Lee) has a henchman at the MetroCourt posing as a server.

Will Olivia have her mob minion slip Jason some poison into his drink or dinner? Another sign Olivia may be planning to poison Jason is her mysterious Asian lair with the jars of ominous looking herbs. Are there poisons among those? And what other revenge does Olivia have planned? 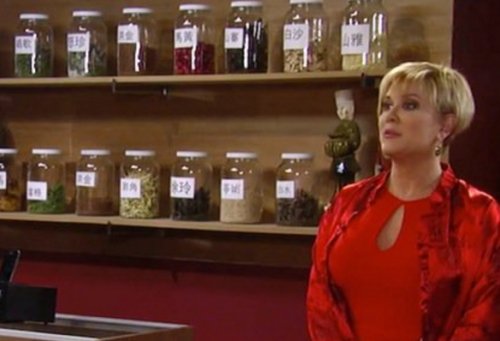 Remember Robin Scorpio (Kimberly McCullough) is still in Port Charles and so is Emma Drake (Brooklyn Silzer). Both her daughter and granddaughter are precious to Anna, so they seem likely targets for Olivia to kidnap, harm or even kill for all the sins Olivia imagines Anna committed against her.

Will Olivia kill someone else before she leaves town in a few weeks? She already killed Morgan Corinthos (Bryan Craig), so who’s next? Jason will survive the poisoning attempt, but it’s doubtful Olivia will stop there. What else is the mob madwoman planning?

Share your comments below and tune into CDL for the latest General Hospital spoilers and news.