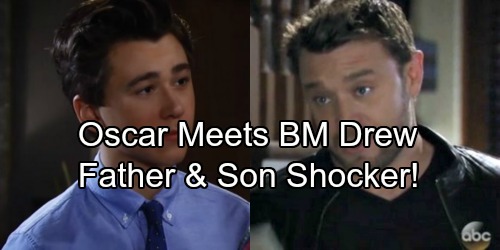 General Hospital (GH) spoilers tease that Oscar (Garren Stitt) will end up feeling pretty overwhelmed next week, November 27 – December 1. There’ll be major drama thanks to Patient Six (Steve Burton) and Ava’s (Tamara Braun) encounter. Things could get pretty crazy as Kim tries to understand the situation. She’ll face the twin bomb and there’ll probably be no way to save the Thanksgiving festivities.

Kim made it clear that she’s not a fan of Sonny’s involvement in organized crime. Since Josslyn (Eden McCoy) and Oscar’s relationship may be short-lived puppy love, Kim’s willing to let it play out. However, that doesn’t mean Kim likes Sonny and Carly. Once GH adds the Patient Six awkwardness, Oscar may worry about his relationship with Josslyn.

Naturally, Oscar will have his father on his mind as well. When he finds out that Kim used to date Drew, he’ll undoubtedly assume that’s his dad. Oscar won’t have proof of which twin is which and neither will Joss, but this will put them on the path to the truth.

Again, Oscar will be pretty thrown by this shocking turn of events. It looks like he’ll sneak out to be alone with his thoughts. Oscar may have some fears about his father rejecting him, especially since the twins both think they’re Jason. It’ll be a lot for the teen to take in.

Meanwhile, Josslyn will continue her efforts to learn the real story. She’ll come up with a scheme to figure out if Oscar indeed belongs to Drew. Joss will hope to nail down which man that might be. She may side with Carly and Sonny on this, so she could focus on retracing Jake Doe’s steps. It’d be a decent start if Josslyn wants to find out how Drew became fake Jason. 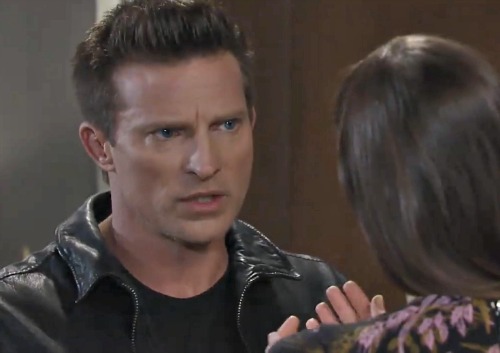 Of course, let’s be real here. Patient Six and Jason’s investigative allies are far more likely to make progress first. They’ve got professional adults working on this. Josslyn can play Nancy Drew, but the pros will probably deliver the actual proof. It appears Jordan (Vinessa Antoine) and Curtis (Donnell Turner) come through for the Jasons after a chat with Andre (Anthony Montgomery).

Since it sounds like P6 will be revealed as the true Jason (at least for now), Miller’s Drew may be informed that he has a teenage son. How will BM Drew and Oscar’s first meeting go? Will there be tension since Drew isn’t too keen on giving up his current life? General Hospital spoilers suggest that some surprises are in store.

This is certainly an intriguing part of the twin storyline, so GH viewers will want to stay tuned. We’ll give you updates as other General Hospital news comes in. Stick with the ABC soap and don’t forget to check CDL often for the latest General Hospital spoilers, updates and news.