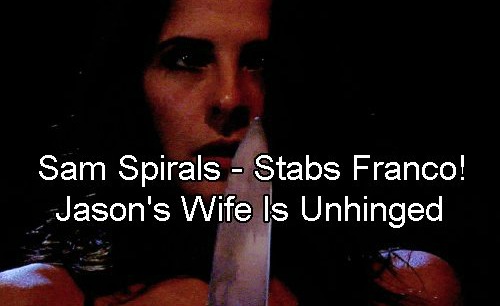 General Hospital (GH) spoilers reveal that Sam Morgan (Kelly Monaco) will continue to fall apart. Something is deeply wrong with her neurologically and she will continue to spiral. We just saw that Sam was sleep walking and grabbed a knife out of the kitchen. If that wasn’t bad enough, Sam held the huge butcher knife while she stared at Jason Morgan (Billy Miller) asleep and with his back turned.

There was a moment there when General Hospital fans wondered if Sam was going to hurt her husband. Instead, Sam slipped the knife under her pillow then lied to hide from Jason that she had taken it in the night. Sam is not only acting out irrationally, but it seems she doesn’t know what her troubled sleeping self is up to at night. Lucky for Jason, Sam knows he loves her, even when she’s off kilter and not herself.

But there’s someone that Sam thinks of as a threat always – and that’s Franco Baldwin (Roger Howarth). Franco is off screen right now since Roger Howarth had a hiatus from set for several weeks because of his contract negotiations. But Roger and General Hospital inked a new contract deal and Roger is already back on set shooting as of last week so he’s just a few weeks away from new GH episodes we’ll see. 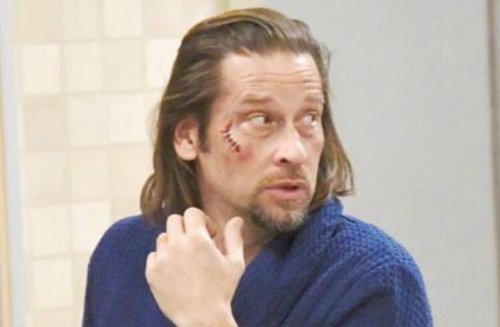 When Franco is back, he’ll return just as Sam’s health crisis is reaching a frightening peak. Already, Sam is hearing voices and seeing things like Jason’s bizarre and bloody head wound when they were talking at General Hospital. And remember, Sam railed at Jason for putting his life at risk by fighting Costa Phillipos (Eddie Davenport). Sam angrily reminded Jason he has two children to think about.

Jason was thinking about their kids and his kid with Liz Webber (Rebecca Herbst), Jake Webber (Hudson West), and that’s why he thought he had to eliminate Costa as a threat. Turns out Costa was mind controlled and acting under orders so Jason let the cops have him, but Jason is still worried there’s a threat. The problem is, the threat is sleeping beside him in bed. Sam is a danger to everyone – and herself.

Soon enough, when Franco is back on the scene, General Hospital spoilers hint that Sam will have one of her hallucinatory fits and will see Franco as a threat to Jason and their children. The latest GH buzz hints that Sam thinks she has to save Jason from Franco and will stab the reformed serial killer. Many GH fans think Franco has some payback coming for the way he tormented Sam and Jason years ago. 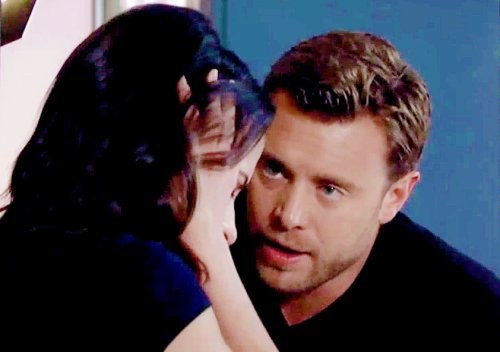 But since that was long ago and Franco has his deadly tumor removed, he’s been a pretty decent guy. Too bad Sam and her big knife don’t know that. Jason and Liz will freak out when Sam attacks Franco and tries to kill him. The good news is, Franco will survive. The further good news is that there’s no way Franco would ever press charges against Sam because he knows he owes her goodwill for the past.

This might be the warning sign that finally forces Jason to get Sam medical attention – even if he has to do it against her will. Share your comments below on Sam’s mental health spiral and her attack on Franco. And be sure to tune into CDL often for the latest General Hospital spoilers, news and updates.