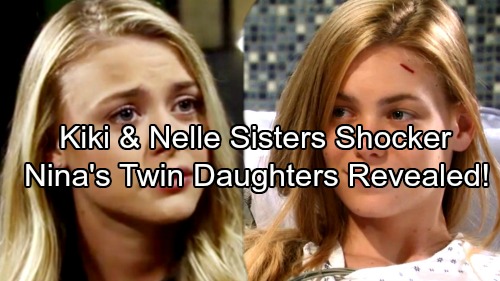 General Hospital spoilers suggest GH fans are about to get the shock of their lives when it is not only revealed that frenemies Kiki Jerome (Hayley Erin) and Nelle Benson (Chloe Lanier) are twin sisters, and that their biological mother is Nina Reeves Cassadine (Michelle Stafford).

Viewers of the ABC sudser have noticed that Nelle Benson has become extremely close to Nina after being hired to be the nanny of her step daughter, Charlotte Cassadine (Scarlett Fernandez) and even after Nelle decided not do Nina’s dirty work, Nina felt an instinct to protect Nelle and suggest her estranged husband, Valentin (James Patrick Stuart) stay on because Charlotte loves her. 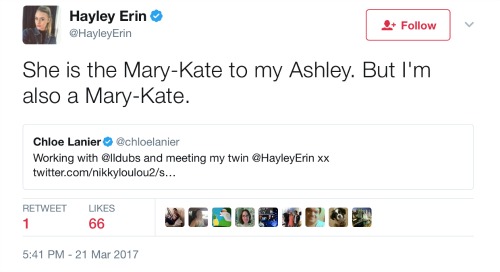 The biggest clue General Hospital provided that Nelle and Kiki are twin sisters was handed to us by Chloe Lanier and Hayley Erin themselves. In March, 2017, Chloe dropped a tweet explicitly calling Kiki her twin sister – and Hyaley responded in kind!

General Hospital fans also know that Nina has had a very maternal relationship with Kiki, whose supposed mother, Ava Jerome (Maura West) has been a bit of a thorn in Kiki’s side bringing far more drama than any daughter deserves. In fact as General Hospital spoilers make clear, Kiki has basically disowned her burned ma over the Morgan med swap and will need a new motherly shoulder to cry on. 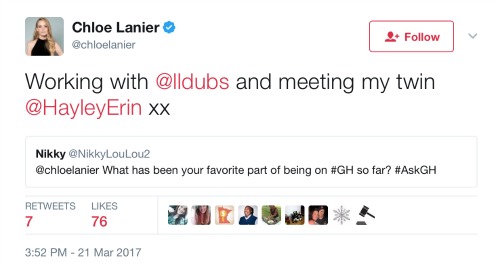 Nina and Kiki haven’t always been close in fact, Nina hated Kiki when she first got involved with Franco Baldwin (Roger Howarth) – she despised Kiki because she believed Ava was her mother, and the product of her husband’s illicit affair.

General Hospital fans know that Madeline Reeves (Donna Mills) despised Dr. Silas Clay (Michael Easton) and would have done anything to make sure there was no permanent ties between him and then-wife, Nina.

Could it be that Nina is so protective over both girls because its her maternal instinct kicking in? Anyone who is up-to-date on all the excitement in Port Charles, know that Nina is about to have her earth shattered even more. She just learned how evil her husband Valentin really is and with it looking like their marriage coming to an end, she won’t have her beautiful little Charlotte around to mother any more.

It is entirely medically possible Nina carried the twin babies to term and Madeline gave one to Ava, Silas’ mistress and one to Frank Benson, who has already adopted a child before, Carly Corinthos (Laura Wright). General Hospital spoilers tease it is plausible that he was unable to have children and chose to adopt again. 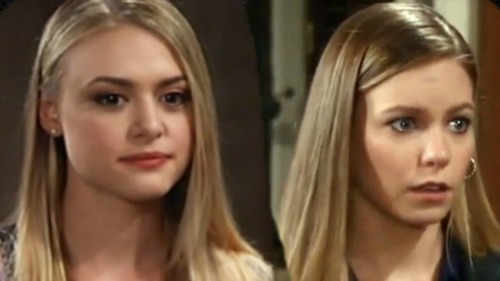 General Hospital history shows that Kiki and Nelle have sort of become friends over the past year – but that could all change if Nelle reunites with Kiki’s former love, Michael Corinthos (Chad Duell). Kiki may be involved with Michael’s cousin, Dillon Quartermaine (Robert Palmer Watkins) at the moment, but as we have all witnessed, Nelle is not beyond being devious to attain what she wants; including manipulating her health situation to keep Michael around!

How do you think GH’s Kiki is going to handle coping with not only the truth about Nina being her mother instead of Ava and having a new found sister? We have watched Kiki spiral out of control with her PTSD after being shot – could she come close to the edge again when she becomes overwhelmed with the magnitude of this revelation?

She is the Mary-Kate to my Ashley. But I’m also a Mary-Kate. https://t.co/3NzUtGUosE