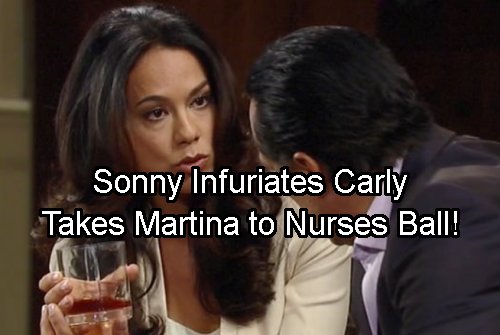 General Hospital spoilers for next week’s new GH episodes, May 22 to May 26,  reveal the Nurses Ball might prove to be a battleground for one couple that’s on the rocks. Will CarSon’s ugly divorce play out at the biggest night in Port Charles and embarrass both Carly Corinthos (Laura Wright) and Sonny Corinthos (Maurice Benard)? A new promo video shows Carly is there smiling and clapping but Sonny also has a table reserved.

On Monday’s new GH episode, Carly confronts Sonny for sleeping with her lawyer Martina Morales (Daya Vaidya) and things get intense. What makes things more difficult is that Sonny isn’t sorry at all that Carly caught him red-handed having sexy time with the lady lawyer. In fact, Sonny’s secretly pleased. Sonny wanted Carly to feel the same hurt that he did when he found Jasper “Jax” Jacks (Ingo Rademacher) half dressed at her place.

Carly is stunned that neither Sonny or Marina has any shame and she’ll make threats and accusations and then storm out. But is that the last Carly will see of her ex lawyer Martina? Sonny seems to be having a good time with Martina and won’t be eager to let her leave Port Charles and head back to LA. Can Sonny convince Martina to stick around long enough to attend the General Hospital Nurses Ball with him? 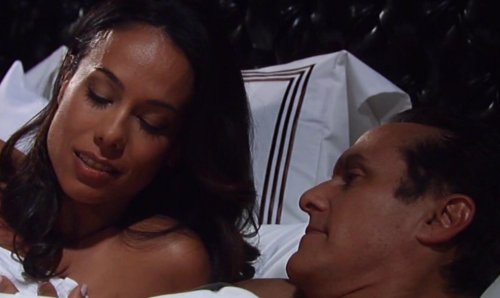 Since Carly now knows that Martina and Sonny are sleeping together, there’s no reason to hide it anymore so if Martina sticks around, Sonny can take his sexy new lady out in public with him. And what’s more public in Port Charles than the annual Nurses Ball? General Hospital buzz is that Carly will be utterly humiliated if Sonny shows up with Martina on his arm, so that seems like exactly what Sonny might do because he’s being vengeful.

When Sonny dislikes someone, as he does Carly right now, he can be petty and vindictive. Unfortunately, Carly also has the tendency to behave the same way, so Carly might also show up with a hottie on her arm. Some recent General Hospital spoilers tease that Carly might embark on a romance with hunky doctor and former priest Griffin Munro (Matt Cohen), so maybe he’ll be her date. 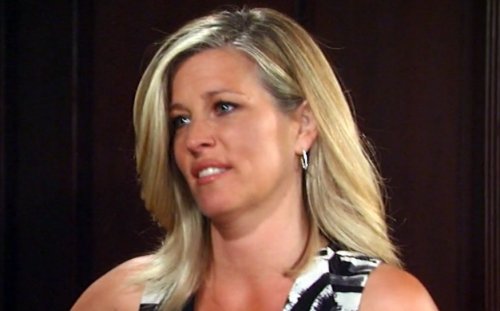 However, if Sonny does bring Martina as his date, one person that won’t take it well is Michael Quartermaine (Chad Duell). Michael has been trying to be a neutral party in his parents’ increasingly nasty split but if Sonny shows up with Carly’s lawyer on his arm, Michael will take his mom’s side. Sonny is on the brink of alienating everyone in his life with his increasingly outrageous behavior.

Sonny and Carly will soon discover that Ava Jerome (Maura West) is partially responsible for the death of their son, but even that revelation won’t be enough to pull them back together. CarSon is broken up worse than they ever have been before. Sonny’s antics with Martina are just the nail in the relationship coffin. Can CarSon ever come back from this? Share your comments and tune into CDL often for more General Hospital spoilers.