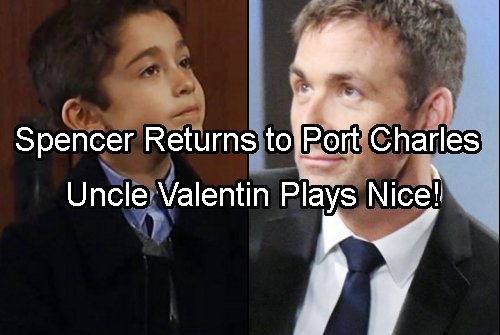 General Hospital (GH) spoilers for May sweeps promise the return of the little prince Spencer Cassadine (Nicolas Bechtel) at long last. Spencer has been tucked away in boarding school in Europe under high security thanks to Laura Spencer (Genie Francis), but the kid is overdue for a visit.

General Hospital showrunner Frank Valentini said he was going to try and bring Nicolas Bechtel back for sweeps and it’s been confirmed now so we should see Spencer back in just a week or two. With lots of Cassadine drama ramping up, it’s no surprise the writers have added an arc for Spencer.

There are several more Cassadines in Port Charles than there were when Spencer left and he’ll soon have a chance to get to know his cousin Charlotte Cassadine (Scarlett Fernandez). With Laura hanging out at Lulu Spencer’s (Emme Rylan) house, that will be where Spencer will stay. 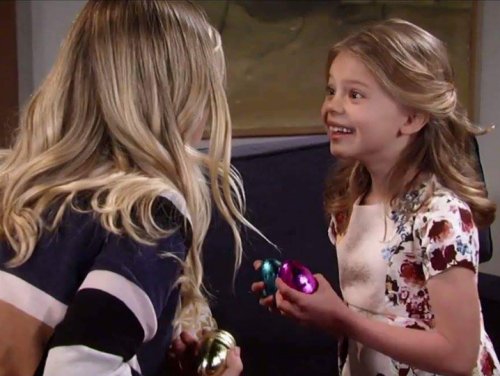 That’s also where Spencer will meet and spend time with Charlotte but General Hospital fans have to wonder what Spencer will think about living life as a “townie” since Valentin Cassadine (James Patrick Stuart) owns Wyndemere and Spoon Island now. Will Laura tell Spencer that his great-uncle is a killer?

As of the last time we saw Spencer, he seemed unconvinced that his dad Nikolas Cassadine (Tyler Christopher) was dead. But unless Spencer has heard from the missing prince, it seems, for now, he’s sleeping with the fishes. However, perhaps Spencer will bring a hint of hope.

Spencer met Valentin when he tried to spirit the kid away from Shakespeare camp and Sonny Corinthos (Maurice Benard) and Jason Morgan (Billy Miller) stopped him. But who’s to stop Valentin from interacting with Spencer now, particularly when Charlotte is being swapped between her parents? 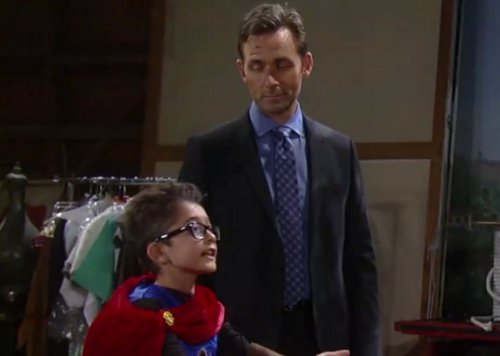 One thing we know about Valentin is that he loves kids, so no matter what he had planned for Spencer back then, he wouldn’t have harmed the kid. But Laura doesn’t trust Valentin for a minute after he presumably murdered Nikolas although with no body found, it seems likely he’s not dead.

Laura will be on high alert and could become a thorn in Valentin’s side, but Lulu will not want her nephew and daughter to be at odds. Spencer and Charlotte have both enjoyed a very privileged, spoiled upbringing so it’s very likely the two will hit it off in a big way and will bond as cousins.

This will drive Laura off the rails, particularly if Valentin can win Spencer over to familial affection. Don’t forget, when he wants to be, Valentin can be very charming and he’s good with kids. Lulu will push for peace and Laura may have to step away so she doesn’t make a scene in front of the kids.

Spencer won’t understand his grandmother and great uncle fighting and Laura doesn’t want Spencer to know the man who “murdered” his father is right there in Lulu’s living room. This is one family reunion that will be bitter. Share your comments below and come back to CDL for more General Hospital spoilers.