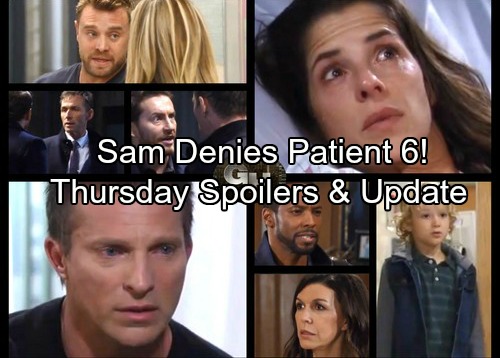 General Hospital (GH) spoilers for Thursday, November 2, tease that Carly (Laura Wright) will meet up with current Jason (Billy Miller) for a serious conversation. She’ll try to convince him that she got it wrong. Carly already apologized to Patient Six (Steve Burton), but she’ll believe she owes current Jason one as well. She feels responsible for the crazy drama that’s unfolding.

Miller’s character will express confusion and disbelief over all this. He’ll wonder who he is if he’s not Jason Morgan. Carly won’t know the answer to that, but she’ll assure Jason that she’s sorry for any pain he’s about to endure. They’re headed into strange territory and many lives will be changed forever.

Danny (T.K. Weaver) will certainly be affected by Patient Six’s arrival. It looks like he’ll walk in on Patient Six and Sam’s (Kelly Monaco) chat. General Hospital spoilers indicate that Danny will be curious about the person in front of him. He’ll ask who this man is, but current Jason will probably hurry him out. There’ll be major concerns about pulling Danny into this wild misunderstanding.

Sam will tell Patient Six that this doesn’t make any sense. She’ll point out that Jason already came back to them and there was proof. Still, part of Sam will have to wonder if they all made a huge mistake. As she gazes in Patient Six’s eyes, Sam will undoubtedly feel a strong connection.

Other General Hospital spoilers say Dr. Klein (Gene Farber) will clash with Valentin (James Patrick Stuart). He’ll demand his help, but Valentin won’t want any part of it. Dr. Klein will grab his associate’s arm and declare that he doesn’t care what Valentin wants. Perhaps the doc will blame Valentin for sending Ava (Maura West) to the clinic and setting this disaster in motion.

Of course, it’s possible that Valentin funded this shady study or was involved in some other way. Regardless, Dr. Klein will feel like Valentin needs to help him out of this jam. Elsewhere, Andre (Anthony Montgomery) will shock Anna (Finola Hughes) when he arrives to say goodbye. He’ll probably allude to some trouble he’s in before he takes off.

While Anna ponders Andre’s news, Finn (Michael Easton) will prepare to deliver some news of his own. He’ll tell Cassandra (Jessica Tuck) that there’s something she should know about his relationship. However, GH spoilers hint that Finn may back out of his confession at the last second. Maybe some new developments will force Finn to finish what he started.

It sounds like a hot episode’s coming up. We’ll give you updates as other GH details emerge. Stay tuned to the ABC soap and don’t forget to check CDL often for the latest General Hospital spoilers, updates and news.