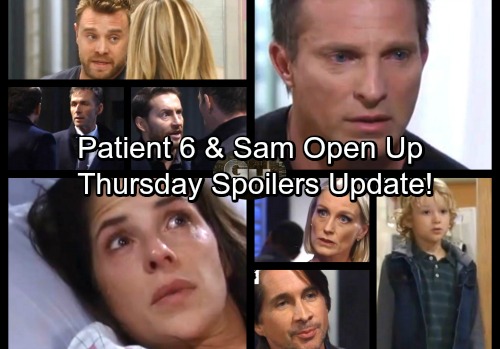 General Hospital (GH) spoilers update for Thursday, November 2, tease that Valentin (James Patrick Stuart) will deal with a real pest. Dr. Klein (Gene Farber) will turn to the crooked Cassadine for help, but he’ll immediately be turned down. Valentin won’t want to get tangled up in Dr. Klein’s mess.

Of course, the doc won’t make it easy for Valentin to walk away. Since Dr. Klein obviously has knowledge of Valentin’s shady deals, he may resort to blackmail. Dr. Klein is a desperate man, but he’d better watch out. People who pose threats to Valentin’s happiness don’t always live to tell the tale.

Elsewhere, Andre (Anthony Montgomery) will show up to see Anna (Finola Hughes). When she asks what this visit is about, Andre will declare that he came to say goodbye. He needs to make a break for it, but he’ll want to give Anna a proper farewell first.

At GH, Sam (Kelly Monaco) will continue her conversation with Patient Six (Steve Burton). He’ll explain his side of the story, but she’ll struggle to understand how this could’ve happened. There was evidence to back up Billy Miller’s character as Jason, but Sam may wonder if this is truly a case of mistaken identity.

Meanwhile, current Jason will remain frustrated with the situation he’s stuck in. Carly (Laura Wright) will strive for a calm and rational discussion. She’ll admit that she believes Patient Six is the real Jason Morgan. Carly won’t want to hurt Miller’s character, but she has to follow her heart right now.

Current Jason will pose a question about his own identity. If Patient Six is Jason, then who is Miller’s character? He’s also Jason – at least based on what’s inside his head. One of them will be revealed as Drew sooner or later, but they’ll have to work through some serious confusion first.

Speaking of confusion, Danny (T.K. Weaver) will face some when he spots classic Jason. General Hospital spoilers say he’ll look surprised as he asks who Patient Six is. Sam and current Jason might shield Danny until they learn more. They’ll probably need some proof before they turn Jake (Hudson West) and Danny’s lives upside down.

Across town, Finn (Michael Easton) will sit down for a chat with Cassandra (Jessica Tuck). He’ll plan to tell the truth about his “lover,” but it appears he may back out in the end. Cassandra will grow quite curious about Anna, so maybe Finn will decide to see how all this plays out.