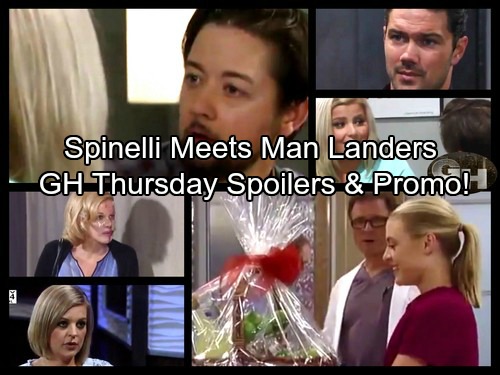 General Hospital (GH) spoilers for Thursday, September 14, tease that Maxie (Kirsten Storms) will mull over her current predicament. She’s hoping to return to Crimson, but Nina (Michelle Stafford) is demanding something special from her. Maxie will realize that the Man Landers story might be the only solution to her problem.

During a chat with Nathan (Ryan Paevey), Maxie will fill him in on her situation. She’ll suggest that getting her job back would mean outing Nathan and Amy (Risa Dorken). Nathan won’t want Maxie to do that, so she’ll probably assure him that their secret is safe. However, we all know that won’t be the end of it. Maxie will hope she can come up with a plan to please everyone.

At GH, Spinelli (Bradford Anderson) will arrive to check on Jason (Billy Miller). His pal is still stuck in a coma, which means he’ll just have to watch and wait. To pass the time, Spinelli will do some reading. Amy will spot him and wonder if he has the Ask Man Landers book. Spinelli will undoubtedly offer his thoughts on the book’s great advice.

Other General Hospital spoilers say Kiki (Haley Erin) will get a big surprise. When a gift basket is delivered, Dr. Bensch (James DePaiva) will ask where the party is. It looks like Dillon (Robert Palmer Watkins) wanted Kiki to know he was thinking of her. He’ll drop by in person a little later, but Kiki may have her hands full with work.

Meanwhile, Griffin (Matt Cohen) will need some assistance. It appears he’ll turn to Anna (Finola Hughes) for help with his mission. Griffin doesn’t want Valentin (James Patrick Stuart) to take advantage of Ava’s (Maura West) pain. He fears Valentin could have something sinister in store, so he needs to put a stop to all this ASAP.

Griffin will finally admit that Ava is perhaps a bit more than a friend. He cares deeply for her and doesn’t want to see her get hurt. General Hospital spoilers say Griffin will face his feelings and try to figure out how to tackle the challenge.

In St. Petersburg, Ava will get tired of waiting around. She’ll threaten to walk if she doesn’t see someone who can give her some answers. Back in Port Charles, Nina will be stunned by Valentin’s openness. He’ll state that he neutralized the key witness in the lawsuit against him. Valentin will note that he made a deal to get Ava out of the picture.

Once Nina hears the details, she’ll be glad that Valentin was honest with her. It’ll be a refreshing change for her normally deceptive husband. We’ll give you updates as other GH news comes in. Stay tuned to the ABC soap and don’t forget to check CDL often for the latest General Hospital spoilers, updates and news.