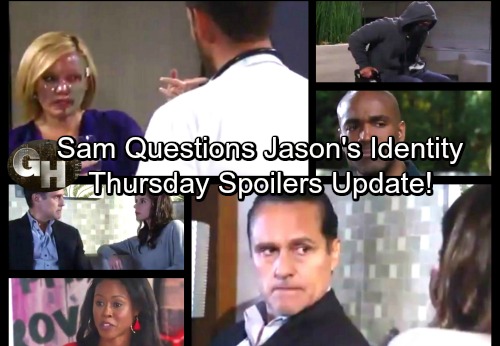 General Hospital (GH) spoilers for Thursday, September 21, tease that Jordan (Vinessa Antoine) will have a chat with TJ (Tequan Richmond). When he asks how things are going with Curtis (Donnell Turner), she’ll have to admit that they’ve hit a snag. Their reunion was derailed almost immediately thanks to Curtis’ conversation with Sonny (Maurice Benard).

TJ will encourage Jordan to look at this from Curtis’ perspective, but she’ll refuse to continue her pattern of bad choices. Meanwhile, Curtis will mull over his side of all this. Valerie (Brytni Sarpy) will bump into Curtis, who’ll be carrying a bouquet of flowers. She’ll suspect that he must be trying to get out of the doghouse.

Curtis will indicate that Jordan doesn’t agree with some of his decisions, so Valerie will offer guidance. She’ll think Curtis needs to ask himself if he’s willing to make the necessary sacrifices. It could be the only way to make Jordan happy.

Other General Hospital spoilers say Valentin (James Patrick Stuart) will get an earful from Lulu (Emme Rylan). Dante (Dominic Zamprogna) just filled her in on his suspicions and now she wants the truth. Lulu will give Valentin a cold stare as she demands to know what he did to Ava (Maura West).

It’s clear that Lulu means business, but she won’t get a straight answer from Valentin. Even Ava isn’t in on the whole story. They’re leaving her out of the loop on some crucial facts at the clinic. GH spoilers state that Ava will once again push for info on Patient Six. Despite being told to stay away and mind her own business, Ava just can’t stop asking questions about the mystery man.

Of course, Patient Six isn’t quite as mysterious to viewers anymore. The character details are still a secret, but we got a glimpse of Steve Burton when he removed those glasses. Will Ava figure anything out? She’s at least going to try. Ava will ask a doctor why Patient Six needs to be controlled. He’ll actually stand up in Thursday’s episode, so Patient Six must have a goal to accomplish.

Elsewhere, Sonny (Maurice Benard) will hope he can help Sam (Kelly Monaco). She needs all the support she can get right now. Jason’s (Billy Miller) ordeal is really taking a toll, but Sam will do her best to press on. It’s all she can do now that Jason is headed to a long-term facility.

Sam will mention that her life has changed a lot since Jason came back. GH is certainly making it sound like Miller’s Jason isn’t the real deal. Will that be revealed down the road? We’ll give you updates as other General Hospital news comes in. Stick with the ABC soap and don’t forget to check CDL often for the latest General Hospital spoilers, updates and news.