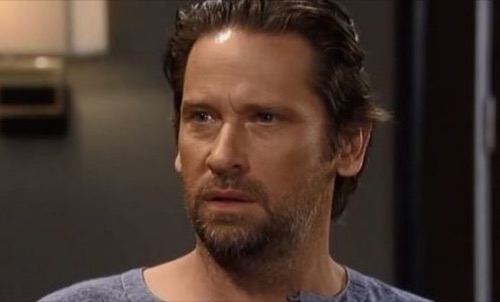 General Hospital (GH) spoilers tease that there’s a good reason Franco (Roger Howarth) was whacked with a brick – and it’s not just to stop him from investigating Tom Baker’s (Don Harvey) murder. It looks like Franco will be left with a scar that should be familiar to One Life to Live fans. This could be the sign that Todd Manning is coming to Port Charles at long last.

Ever since ABC got the character rights back from One Life to Live and All My Children after the Prospect Park lawsuit was kicked out of court, soaps fans have been dying to see their favorite characters brought back to the small screen. With only GH left at ABC, it seems Port Charles is the destination if we get back any of our favorite OLTL or AMC characters – starting with Todd Manning.

Todd is an obvious first choice since his portrayer Roger Howarth is already on GH and Franco has a laundry list of mental problems. All he needs is the scar and he could be Todd Manning! Now that Franco was attacked and judging from the look of his injuries, he could come out of his kidnapping by Seth Baker (Michael Rodrick) with a scar just like Todd Manning’s.

Sam Morgan (Kelly Monaco) saves Franco and gets him to GH for treatment, but he won’t stick around long enough to be properly evaluated for his head wound. As soon as Franco finds out from Nathan West (Ryan Paevey) that Liz Webber (Rebecca Herbst) was last seen talking to Seth, Franco freaks out and rushes out of GH to go save her from the brother killer.

Will Franco’s delayed treatment for his head injury crack his brain? We know he’s got a history of personality disorders (he even thought he was Jason for a bit) so Franco turning into Todd Manning, for even a little while, is totally possible. Franco and Todd have so much in common that’s it not even a stretch – all he needs is the scar to be Todd and now he’s got that too.

Todd was a former rapist redeemed by a woman and that’s a lot like Franco’s story too. There are many ways GH could turn Franco into Todd. He could be an alternate personality that only comes out now and then or Franco could switch completely over to being Todd Manning after saving Liz because of complications from his head wound.

There are some GH spoilers for February sweeps that predict Franco and Liz will finally consummate their relationship but then they face obstacles because a “new threat” doesn’t want them together. The word new in the spoilers is key since Jason Morgan (Billy Miller) and Sam don’t like the Friz pairing but they’re old news.

Todd could take root in Franco’s brain and try to split him up with Liz because Todd wants her for himself – kind of a Jekyll and Hyde thing. There’s lots of ways for this to play out and Nathan Varni promised OLTL and AMC fans they would work towards bringing in some of the other ABC soap characters onto GH if it’s done well.

What do you think OLTL and GH fans? Would you love to see Franco turn into Todd Manning? Share your comments below and tune into CDL for the hottest General Hospital spoilers and news.