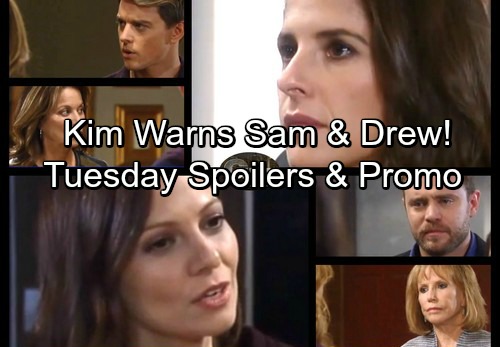 General Hospital (GH) spoilers for Tuesday, December 5, tease that Kim (Tamara Braun) will decide to have a chat with Drew (Billy Miller) and Sam (Kelly Monaco). She might give them a heads-up about Oscar’s (Garren Stitt) growing interest in his father. Perhaps Kim will downplay Drew as a possibility and urge them to let her know if Oscar comes sniffing around again.

At GH, Amy (Risa Dorken) will make a shocking discovery. When she realizes Maxie (Kirsten Storms) has a baby-related appointment, she’ll rush into to confirm the pregnancy. Nathan (Ryan Paevey) and Maxie will happily admit they’re expecting a little one. This couple’s on cloud nine, so Amy will definitely be thrilled for them.

Other General Hospital spoilers say Olivia (Lisa LoCicero) will clash with Monica (Leslie Charleson). They’ll start bickering about Christmas decorations, but it won’t take long for the confrontation to go a bit deeper. Olivia will just wish that Monica would start treating her like a member of the family. She doesn’t feel accepted, but she also can’t stop pushing Monica’s buttons.

Ned (Wally Kurth) will do whatever he can to ease the tension, but getting them to agree on a solution could be tough. Speaking of solutions, Ned will think he has another one in Tuesday’s episode. He’ll talk to Alexis (Nancy Lee Grahn) and Michael (Chad Duell) about his next plan.

Ned will contend that they should buy Drew and Jason (Steve Burton) out of ELQ. Michael and Alexis may wonder if the twins will go for that. Jason might get on board, but what about Drew? He could hold on for dear life since the rest of his world just fell apart. Drew already feels like he’s lost so much. The idea of making more changes may not be appealing.

Elsewhere, Lulu (Emme Rylan) will sit down for a meeting with Peter August (Wes Ramsey). After she makes her spiel, Peter will suggest that Lulu has captured his interest. He’ll ask how he can help Lulu and she’ll offer a satisfied smile. It appears Lulu’s about to follow her investigative journalist dreams and her first round of digging will spell big trouble for Nelle.

It sounds like several GH storylines are heating up. Which ones are you anxious to see more of? We’ll give you updates as other General Hospital news comes in. Stay tuned to the ABC soap and don’t forget to check CDL often for the latest General Hospital spoilers, updates and news.