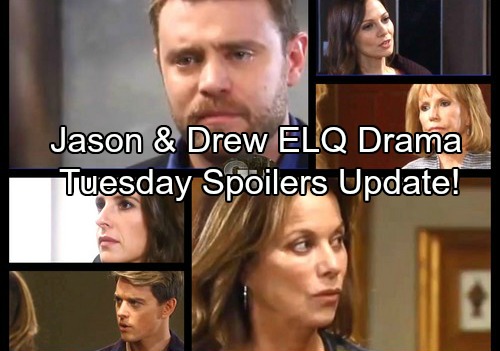 General Hospital (GH) spoilers for Tuesday, December 5, tease that Ned (Wally Kurth), Michael (Chad Duell) and Alexis (Nancy Lee Grahn) will discuss some potential ELQ drama. Now that the twin situation has been sorted out, they’ll worry that major problems are looming. Another relative has been added to the mix, so that’s going to throw off the distribution of their shares.

Ned will contend that they maybe they should buy Drew (Billy Miller) and Jason (Steve Burton) out. He’ll think they should clear this up before chaos hits. Michael and Alexis may have doubts about Ned’s plan. There’s no guarantee that Drew and Jason will agree to their terms. It’s possible that they’ll convince Jason to go along with it, but Drew may put up a fight.

Elsewhere, Olivia (Lisa LoCicero) will get on Monica’s (Leslie Charleson) last nerve. She’ll start an argument over the Christmas décor and things will get pretty heated. General Hospital spoilers say Olivia will be hurt by the constant conflict. She’ll feel like Monica just doesn’t see her as a member of the Quartermaine clan.

Ned will realize there’s been another dispute, so he’ll try to resolve it. Achieving peace is a real challenge in this household, but Ned will give it his best shot. Meanwhile, Amy (Risa Dorken) will spot Maxie (Kirsten Storms) in a hospital gown at GH. Proud Papa Nathan (Ryan Paevey) will be right by her side. They’ll hope to make sure their baby is A-OK at this doctor’s appointment.

Amy will put a few puzzle pieces together and determine that Maxie must be pregnant. She’ll congratulate the happy couple and head on her way. Across town, Peter August (Wes Ramsey) will have an interesting chat with Lulu (Emme Rylan). She’ll make a pitch that leaves Peter anxious to fulfill Lulu’s dreams. It sounds like she’s officially on the road to being an esteemed investigative journalist.

Other General Hospital spoilers state that Kim (Tamara Braun) will speak with Sam (Kelly Monaco) and Drew. She’ll pop in and note that she’d like to talk to them about her son. Oscar (Garren Stitt) is on the verge of learning the truth about his father. Kim might suggest that Oscar’s suspicions are pointing him in Drew’s direction.

Even if Oscar’s right, Kim probably wouldn’t admit it. Instead, she might urge Drew and Sam to give her updates if Oscar bothers them again. Kim’s desperate to control the info Oscar gets his hands on. Little does she know a paternity test is in the works! Sam and Drew are bound to get suspicious as well.

Some shocking moments are ahead in Port Charles. We’ll keep you posted as other GH news comes in. Stick with the ABC soap don’t forget to check CDL often for the latest General Hospital spoilers, updates and news.