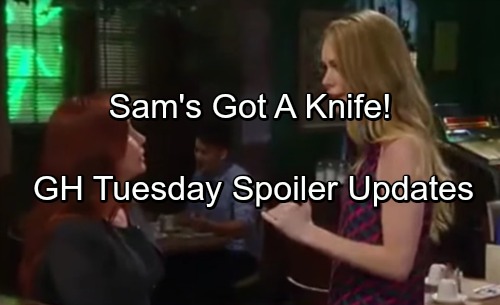 General Hospital (GH) spoilers  and updates for Tuesday, June 20, tease that Nina (Michelle Stafford) will realize Nathan (Ryan Paevey) and Amy (Rita Dorken) are up to something. She’ll corner Nathan and push him to tell her what’s going on. When Nina gets curious about something, it’s tough for her to let it go.

Nathan may not want to reveal the “Man Landers” details, but he might admit that he’s helping Amy out of a jam. He’s not loving this arrangement, but Amy desperately needs him. While Nathan rescues Amy, it seems Nina will have to do the same for Nelle (Chloe Lanier). She could actually end up assisting her former employee in more ways than one.

Before Nina enters the fray, GH fans will see Nelle and Bobbie (Jacklyn Zeman) face off. Conflict always erupts whenever these two are in the same room. Nelle will feel like Bobbie’s mission is to destroy her life. She’ll urge the ice queen to butt out, but since when has Bobbie ever taken orders?

Bobbie is hoping to protect Michael (Chad Duell), but we all know he’s going to do his own thing anyway. His family will just have to get on board. Michael is working toward a romance with Nelle, but she’s feeling a bit overwhelmed by the sudden shift in their relationship. Perhaps Bobbie’s disapproval will push Nelle to go after what she wants.

Other General Hospital spoilers say Sam (Kelly Monaco) will lurk with that ginormous knife. She certainly looks menacing with a dangerous weapon and those crazy eyes. Sam is struggling with intense visions and voices. It’s becoming harder and harder for her to tell what’s real.

Sam put the knife under her pillow, but she’ll try to sneak it out of there later. When Jason (Billy Miller) catches Sam, he’ll ask what she’s doing. No matter what excuse Sam provides, Jason will obviously be concerned. He’ll want to help Sam get a grip, but this situation will get much worse before it gets better.

On the island, Sonny (Maurice Bernard) will plan on mixing business with pleasure. Carly (Laura Wright) will object when Sonny makes a bold move, but she knows she wants a reunion deep down. Back in Port Charles, Josslyn (Eden McCoy) will grill Michael about Carly and Sonny’s intentions. She’ll be convinced that they’re getting back together.

Josslyn is headed down a wild path and it could lead to disastrous consequences. Julian (William deVry) and Alexis (Nancy Lee Grahn) will also have an uncomfortable encounter in Tuesday’s GH episode. Jennifer Bassey’s character will debut as well. It should be fun to see how she shakes things up.

General Hospital has some great scenes in store for us. We’ll give you updates as other news comes in. Stay tuned to the ABC soap and don’t forget to check CDL often for the latest General Hospital spoilers, updates and news.