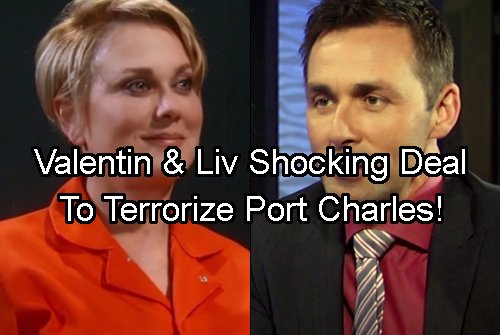 General Hospital (GH) spoilers reveal Valentin Cassadine (James Patrick Stuart) brought Olivia “Liv” Jerome (Tonja Walker) to Port Charles and used her to do all his dirty work. As of now, only Nora Buchanan (Hillary B Smith) and the two culprits know the link between them, but all will be exposed within the next couple of months on new GH episodes.

Where Liv went after her recovery in Asia was revealed today when Kevin Collins (Jon Lindstrom) mentioned on the stand that Liv had been in and out of mental institutions. Kevin said, “Her most recent stay was just last year.” Doesn’t it seem strange that Liv was in a padded room a year ago just before she launched her plan? 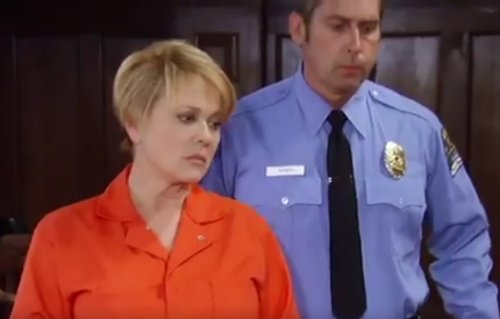 General Hospital fans knowLiv has been controlling Julian for a year and had deep pockets to spend plenty of cash on her evil plans. General Hospital spoilers indicate it was Valentin was bankrolling Liv. She was like an insane loaded weapon that Valentin pointed at the people of Port Charles to wreak havoc and it helped that many of their goals aligned.

Even though she didn’t know him, Alexis is Valentin’s sister and he may not like her being married to a disreputable mobster. Since Liv hated Julian and wanted her brother dead, killing Julian took out two birds with one bomb but the plan failed. Killing Julian would give Liv revenge and Valentin could see his sister and niece free of the mobster.

With Anna, both Liv and Valentin had grudges. Even though Valentin is attracted to Anna, she tried to have the WSB assassinate him and made him feel bad back when he was a stuttering hunchback. There’s lots more history between Valentin and Anna and he liked the idea of Liv taking revenge on her for him so his hands stayed clean. 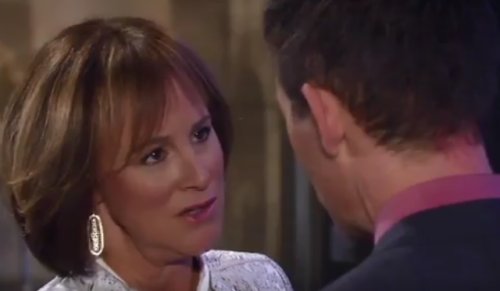 Valentin paid Nora a big bonus to have Liv declared incompetent so she was sent to an asylum instead of jail. Anna thinks it will be harder to get out of, but that seems doubtful. What’s strange about Nora representing Liv is that Nora was shocked when the list of criminal charges was read – like she was stunned to hear all the crimes.

Since Nora took a big payday from Valentin, General Hospital spoilers claim she had to help Liv even knowing a killer would avoid prison. Maybe Liv suggested hiring Nora since she seems to know more about Nora than Valentin. Today, Liv told Nora, “Tell that old cowboy of yours I said hi” referring to Bo Buchanan (Robert S. Woods). Nora was stunned.

Nora advised Valentin to keep his nose clean for six months so custody of his daughter won’t be at risk, but it seems like his dirty schemes with Liv will come out and he might lose everything including Charlotte Cassadine (Scarlett Fernandez), Nina Cassadine (Michelle Stafford) and the new life he’s built for himself in Port Charles. Share your comments below on the Valentin and Liv partnership and tune into CDL often for the latest General Hospital spoilers, news and updates.