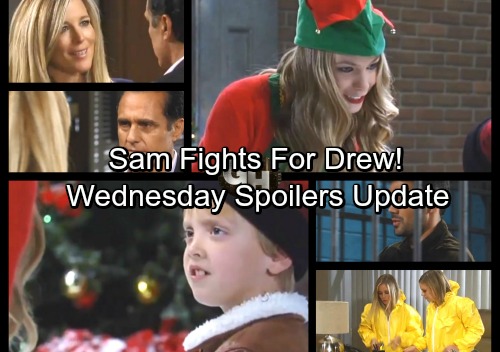 General Hospital (GH) spoilers update for Wednesday, December 6, tease that Lulu (Emme Rylan) and Maxie (Kirsten Storms) will dig around until they find what they’re looking for. They need evidence that points to the Ask Man Landers source. Lulu (Emme Rylan) will hope she can come up with solid proof for her next big story.

Maxie also wants to know who exposed Nathan (Ryan Paevey) and Amy’s (Risa Dorken) scheme. After a thorough search of the office, Lulu will hit the jackpot. She’ll tell Maxie that they should get out of there, but it may be too late. General Hospital spoilers hint that Maxie will be arrested thanks to this little escapade.

Lulu might be locked up as well, but there’s a chance that Maxie will take the fall. She might divert attention to herself while Lulu makes a getaway. They both know how important this mission is. Regardless, GH fans can expect Maxie to face backlash. It looks like Nathan will confront his wife as she sits behind bars. He’ll wonder why Maxie would do something so risky.

Other General Hospital spoilers say Curtis (Donnell Turner) will play Santa for all the Port Charles kids. He won’t be so jolly when they start off, but Jordan (Vinessa Antoine) will urge him to get in the Christmas spirit. Nelle (Chloe Lanier) will do her part to spread holiday cheer, too. She’ll dress up as Santa’s elf, so she’ll have another opportunity to chat with Michael (Chad Duell).

Michael mentioned that he was going to take Rocco (O’Neill Monahan) to see Santa. He’ll keep his promise and strike up a conversation with Nelle while they wait. They’ll share some nice moments, but the evidence Lulu uncovers will stir up more trouble soon.

In the meantime, Julian (William deVry) will approach Olivia (Lisa LoCicero) and demand his son. It sounds like he wants visitation ASAP. With Alexis’ (Nancy Lee Grahn) support, Julian won’t take no for an answer. He’ll suggest that he has a right to be in Leo’s life.

Across town, Carly (Laura Wright) and Sonny (Maurice Benard) will debate the lingering twin drama. Sonny will think it’s pretty much settled, but Carly won’t have the same perspective. Until Jason (Steve Burton) gets his family back, Carly won’t feel like they’ve truly accomplished their goal.

Elsewhere, Sam (Kelly Monaco) will fret about Drew’s (Billy Miller) sudden arrest. She’ll immediately get in touch with Alexis for some legal advice. Sam will do whatever it takes to secure Drew’s freedom. He’s being charged with desertion, but he was apparently abducted and can’t even remember his former life.

Drew will deal with major frustration throughout this ordeal. We’ll give you updates as other GH news comes in. Stay tuned to the ABC soap and don’t forget to check CDL often for the latest General Hospital spoilers, updates and news.