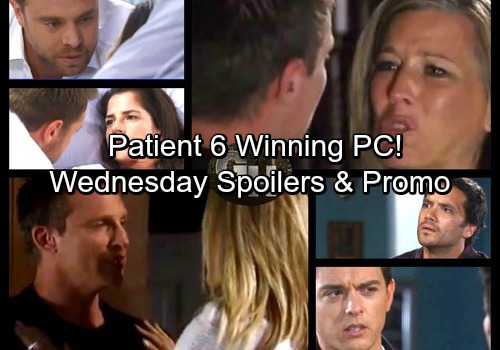 General Hospital (GH) spoilers for Wednesday, November 1, tease that Franco (Roger Howarth) will corner Andre (Donnell Turner) and demand some answers. He’ll insist that it’s time for the truth about Jason’s (Billy Miller) twin. Andre will be pretty rattled as Franco tosses around veiled threats. He’ll begin to crack under the pressure, so maybe we’ll hear a few details that can help Franco out.

Meanwhile, Dante (Dominic Zamprogna) will give Michael (Chad Duell) updates on the Patient Six (Steve Burton) drama. He’ll note that there’s someone else who could be the real Jason Morgan. Michael will think that actually makes sense. He’ll confess that Miller’s version never really felt like Jason to him.

Across town, Carly (Laura Wright) will share some sweet moments with Patient Six. General Hospital spoilers say she’ll struggle to talk through her tears. Carly will suggest that there’s just so much she wants to tell him. Patient Six will also get a bit emotional as these close friends reconnect. Viewers won’t want to miss the touching scenes ahead.

At GH, Sam (Kelly Monaco) will wake up and try to recall the night’s events. General Hospital spoilers say a concerned Jason will ask what Sam remembers. His mind is racing over the man he believes is an impostor. Sonny and Carly are basically turning their backs on current Jason, so he’ll hope that Sam will be the one to stand by him.

Jason will also have some concerns about Danny (T.K. Weaver). Perhaps he’ll worry that the latest threat could spread to his kids. General Hospital spoilers state that Jason will do whatever he can to protect the people he loves. He’ll assure Sam that no one is going to tear their family apart, but some bumps in the road are definitely looming.

Elsewhere, Maxie (Kirsten Storms) will surprise Nathan (Ryan Paevey) and Amy (Risa Dorken). She’ll push them to continue their Ask Man Landers charade on Wednesday’s episode. In fact, Maxie won’t take no for an answer! Nathan will be especially reluctant to keep up this ruse, but we all know Maxie won’t let this go.

Unfortunately, it looks like Maxie could blow this for the Man Landers duo. Amy and Nathan could face severe consequences thanks to Maxie’s upcoming move. We’ll keep you posted as other GH news comes in. Stay tuned to the ABC soap and don’t forget to check CDL often for the latest General Hospital spoilers, updates and news.