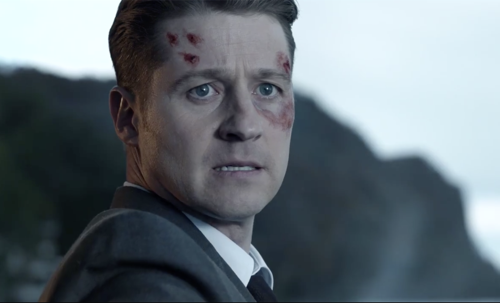 Tonight on FOX Gotham continues with an all new Thursday, September 21, 2017, called, “A Dark Knight: Pax Penguina” and we have your Gotham recap below for you. On tonight’s episode as per the FOX synopsis, “In the Season 4 premiere, Gordon fears Jonathan Crane is still alive and back in Gotham when the Scarecrow’s signature MO is used in a series of robberies. Meanwhile, Penguin’s “licensing” of crime in the city backfires during the grand opening of his new Iceberg Lounge; and, in the aftermath of his encounter with Ra’s Al Ghul, Bruce begins his vigilante watch.”

Penguin is running things now. He sort of took control over the city when there was no one else that could rise to the occasion. However, Penguin has his own way of doing things and he took control of crime. He was responsible for issuing licenses that allowed anyone in Gotham to commit crime as long as it wasn’t murder, but it turns out that these licenses work. Crime has gone down, people felt safer, and everyone that signed off on allowing the licenses were allowed a kickback. So there was only a handful of people that didn’t like Penguin’s vision for Gotham and Jim just so happened to be one of them.

Jim believed that no crime should be made legal and so he was against the licenses. But his fellow officer had had a different idea. They had apparently realized that there was less of a risk for them out there on the street with these licenses meaning they couldn’t arrest or get into a fight with certain perpetrators. So the GCPD had to come respect Penguin’s efforts for them and the only one that was truly against it was Jim. Jim had tried to talk to Harvey about it and Harvey had said that it wasn’t out of their hands now. The law itself was complying with Penguin’s orders and Harvey wasn’t going to go break some rules merely because Jim wanted him too.

Except Jim wasn’t alone. He had hated the idea that criminal could walk away so easily and for that matter so did Bruce. Bruce had started to patrol the city and his vigilante justice wasn’t exactly complying with Penguin’s orders because he didn’t care who he took out. Bruce was simply stopping people from committing crime and ignoring them when they try to use their licenses as an excuse. So Bruce had gone to Jim to seemingly catch up and he had asked why the GCPD weren’t going anything anymore though Jim had been forced to tell Bruce that his hands were tied. He said that Penguin had changed things and that he now only goes after the outlaws.

The outlaws were people operating with a license and recently a group of them had broken into a bank using Gerard Crane’s formula to take out the guards. So those were the type of people Jim could go after and Bruce had said something to him that could help before leaving the police station. Bruce had said that he hoped to see Jim that night at Penguin’s Grand Opening and so that had given Jim an idea. Jim had realized he could use the Grand Opening to flushing out the outlaws. He later stopped by the club to berate Penguin and say that there was a group out there that didn’t follow the new rules yet that naturally made Penguin very defensive.

Penguin said that he was the one keeping the city safe and that nothing or no one was going to ruin that. Yet, that was just right sort of dare to lure out the outlaws. The outlaws had kidnapped Jonathan Crane and had terrorized the young man until Jonathan recreated his father’s formula. So when the gang left to go break into Penguin’s club like Jim suspected they would, they had also thrown a very terrified Jonathan into a closet with a scarecrow. They had thought that it was funny for Jonathan to face his fears and had therefore ignored Jonathan’s pleas for help however that turned out to be something they would later regret.

Back at the police station, Jim tried to gather an armed unit to protect the club and catch their bank robbers except his own team had betrayed him. They had all liked the way the Penguin was doing things and had tried to jump Jim in the locker rooms. However, he managed to fight them off and chose instead to just go to the club with Harvey as backup. So the men had been hoping to turn up at the club in time and they arrived a few minutes too late. The gang had tried to break into the club and Penguin had had his guys drag the gang out in front of everyone because he wanted to make a lesson out of them.

Penguin had told the whole crowd how he’s the one keeping them safe and that they should all be thanking for him for bringing law and order back to Gotham. But Penguin was going to execute the group for daring to defy him when Bruce spoke up. Bruce had asked Penguin to hand over the gang to the police so that justice could be served and as Penguin was about to ignore Bruce’s request in front of the cameras – Ivy turned off the lights. She hasn’t been feeling appreciated lately and so she turned off the light to ruin the night though that put everyone in danger. The gang tried to flee and they had gotten close enough to gas Penguin. So the cameras ended up catching a funny moment.
The cameras caught the police officer arresting the gang and Penguin pleading to Jim for help because he was seeing hallucinations. Though thanks to that photo, the media suddenly changed their mind about Penguin. He was no longer the hero, he was a frighten chicken that needed the police to save him. So Harvey later warned Jim that Penguin want to retaliate for what happened and Jim didn’t really care. He said he could handle Penguin because what had mattered to Jim was the city and he hadn’t wanted the city to lose faith in the police department as they all recovered from the insanity.

Yet, Bruce hadn’t wanted to let things go. He had seen Selina at Penguin’s party and he had apologized to her for saying she didn’t care about Alfred. She did care and Bruce had known that. He had just been upset at the time and had been lashing out. So she accepted her apology and she also didn’t need to explain why she had asked Tabitha Galavan to become her mentor. Selina had never been one to explain herself and so she didn’t even bother mentioning how Penguin was pressuring everyone into getting a license or else. She simply forgave Bruce and then he went out to do something without any sort of backup.

Bruce had gone after the men that was handling the licenses for Penguin and he had gotten a hold of them, but he couldn’t turn away when he heard a building alarm going off and so he found himself getting caught by the police at an active crime with no one there to help. It had just been him and Bruce didn’t have a license. So Bruce found himself in trouble meanwhile the one gang member that had returned to the house had found Jonathan wearing the scarecrow. The young man had said he wasn’t Jonathan anymore and then he had sprayed the guy that locked him in the closet!