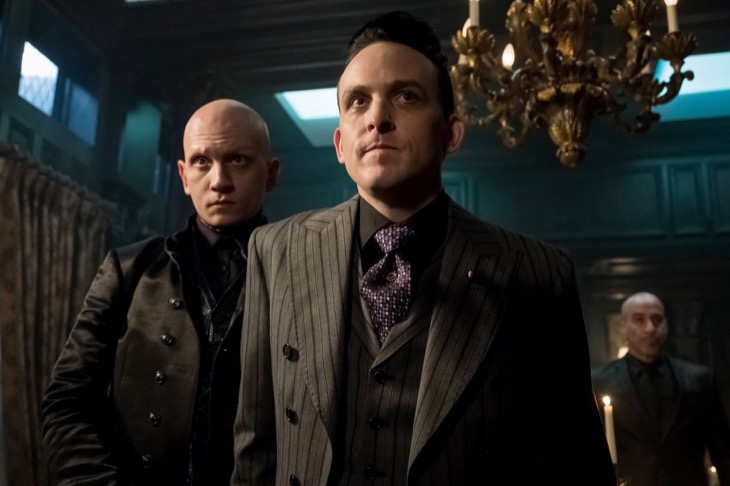 Tonight on FOX Gotham continues with an all new Thursday, October 12, 2017, called, “A Dark Knight: The Demon’s Head” and we have your Gotham recap below for you. On tonight’s episode as per the FOX synopsis, “Bruce Wayne puts the lives of Gotham Natural History Museum historian Niles Winthrop and his grandson, Alex, in danger in an attempt to uncover the meaning behind his prized knife from the auction. Meanwhile, Ra’s Al Ghul proves he’ll take deadly measures to achieve what he wants. Also, Sofia Falcone is on a mission to win back Gotham from Penguin.”

Bruce needed to find out more about this mysterious knife. He knew that he was an embalming instrument used on the first Mesopotamian king and that Ra’s al Ghul wanted it. However, he didn’t why the knife was so important and had therefore taken it to an expert. Bruce had gone to see a historian at the Gotham Natural History Museum and this historian had sworn to Bruce that he wouldn’t tell anyone what he was investigating though his grandson Alex was the one exception because Alek had helped his grandfather before and so Bruce had been fine with him coming on board.

Though Winthrop and his son had later found something interesting. They found out the knife told a story about a man that went into the water and received a new life. So Winthrop had told his grandson that there has been legends about such a thing for a while and that many had wanted to find the key to immortality – so Winthrop said the knife was dangerous and that Bruce could have taken on more than he could handle. And so Winthrop was explaining the dangers for having the knife when someone knocked at their door, but he knew that no one should have been in the building at the time and had asked his grandson to hide with the knife while he dealt with it.

So Winthrop had opened the door to Ra’s al Ghul. Ra’s had wanted to get his hands on the knife and had taken the risk of investigating it for himself. But Winthrop didn’t want to give him anything and had tried to get rid of him by using the alarm that called the police yet Ra’s had still been upset and had killed Winthrop before he left the museum. And, afterwards, Winthrop’s grandson decided not to stay around. Alex had no reason to trust the police in Gotham and he knew he was carrying around a knife that people would kill him over. So Alex went to the one safe place he knew no one would think of.

Alex went to his grandfather’s room at Gotham’s Central Library because he thought no one would find him there however he had forgotten about Bruce and how Bruce had overheard his grandfather talking about Alex’s secret place. Yet, Bruce hadn’t gone to the library alone. He had been forced to reveal everything to Gordon and so Gordon realized he needed Bruce’s help on this case. He needed Bruce to tell him who was after the knife and he had admittedly been upset when he found out Ra’s al Ghul was the leader of the Court of Owls and that he had released the virus. So Gordon had finally gotten Bruce to stop lying to him and start working with him.

Bruce was the only familiar face that Alex would respond to and so the two had gone to the library to bring Alex in. Alex was in probably in danger and had needed Bruce to talk him down. However, Bruce got Alex to talk and Alex eventually revealed he had hidden the knife. So Alex had later relented into going with Gordon back to the station, but before they could get out of there, the library was attacked by seemingly two monsters. One of the monsters crawled around on all fours and acted like a creature meanwhile the other one was practically a giant that didn’t speak in a word in English. And so Gordon told Bruce to get Alex out of there while he dealt with the creatures.

Alex unfortunately had gotten bitten by one before they could escape. But he hadn’t wanted to go to the hospital in case more people came after them. So Alex chose to trust Bruce and give him back the knife. The knife had been hidden somewhere though Ra’s al Ghul had first believed the police had it and had the gall show up there asking for the knife. He claimed he was working for a government in the Himalayas and that the knife held cultural significance. Which is why he sent Barbara to buy back the knife and unfortunately she had failed at the job. Ra’s then went on to talk about the recent tragedies.

He said that he heard from Barbara that there had been a murder and so Gordon played his game. He talked about what happened at the museum and how the culprit might believe Alex saw him when in fact didn’t see anything yet Gordon had also overplayed his hand. He had told Ra’s that he had the knife and had then taken his eyes off the other man when Alfred came storming into the station because he hadn’t a word about Bruce. Though Bruce and Alex had been fine and they had planned on handing over the knife when Ra’s realized the police didn’t have it and had sent his monsters after the boys.

Yet, Gordon had seen the box that the knife was in and he had remembered seeing something with the same designs. So he left Alfred at the station and went back to the museum. Alex had hidden the knife in plain sight at the exhibit and so that’s where everyone found them. The monsters showed up and tried to kill the kids, but Gordon managed to take care of them in the end and had then demanded why so many people were doing over this one knife. Except Bruce couldn’t answer that question. He knew it was important and that’s why he couldn’t let it go even when the great Ra’s al Ghul had showed up.

Ra’s had managed to sneak up behind Alex without anyone seeing him and so he put a knife to the kid’s throat as a way to threaten Gordon into releasing the knife. He said he would kill the boy if he didn’t get however Bruce ultimately refused to hand it over. He told Gordon that he couldn’t hand it over without knowing why Ra’s wanted it and so they watched as Ra’s slit Alex’s throat. But Gordon quickly arrested Ra’s for the murder and he had taken him in. So Gordon had promised Bruce that it was over and he had just wanted an explanation for everything that’s happened. He had overheard Bruce saying that Alfred was dead and then came back to life. And so he wanted answers.

Only Gordon wouldn’t believe a word either Bruce or Alfred were saying. However, Gordon had had another issue at hand when he found out that Sofia had been threatened by Penguin. Penguin had wanted to make it clear that Gotham was his and so he had used Sofia to lure her father’s men out of hiding. So he killed the men and had thought he put Sofia in her place though Sofia as it turns out had known that the first phase of her plan wouldn’t be bloodless. She later told Gordon that she would get close to Penguin and, despite seeing her at her worse, Gordon had still cared about her to warn her.

Gordon had told her that taking down Penguin wouldn’t be easy, but Penguin had so far played around with his competitors as if they were toys. He hadn’t even frozen the Riddler again after the other man pulled a gun on him because he saw how much Riddler was broken and that the other man was hardly a threat anymore.