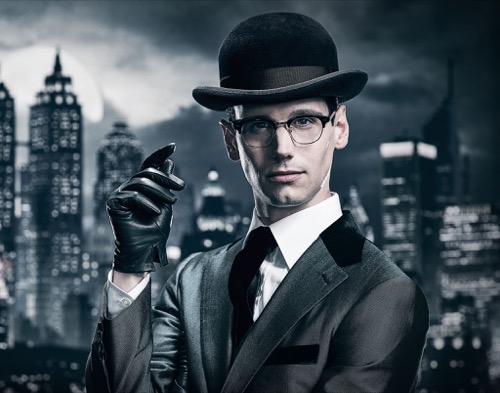 Tonight on FOX Gotham continues with an all new Thursday, September 28, 2017, called, “A Dark Knight: The Fear Reaper” and we have your Gotham recap below for you. On tonight’s episode as per the FOX synopsis, “Under pressure to prove that the GCPD is still powerful, Gordon attempts to bring in Jonathan Crane. However, Gordon puts himself in a dangerous situation at Arkham when he is forced to fight off lunatics and the demon within himself. Meanwhile, with Barbara’s unexpected return, Selina and Tabitha must consider risks that come with joining her in the weapon business.”

Gordon went after Jonathan the second he could. However, he was unfortunately too late because by then Jonathan Crane had become the Scarecrow. Scarecrow had decided to become what he feared the most and that way it couldn’t affect him anymore yet that didn’t stop him from hunting down everyone that had once tried to use his fears against him. So Scarecrow went after one of the men that kidnapped him and after that he went after the man that ran the sanitorium seeing as he had been abused in the hospital.

Yet, Gordon had no idea that Jonathan he knew would have done that. He had met the young man back when he had simply been frightened kid who was cruelly manipulated by his father and therefore it took him a while to change his view. He went looking for Jonathan because he still thought of Jonathan as a victim, but Jonathan wasn’t Bruce. Bruce at least could explain why he had been caught during a heist. All he had to say was that he was looking for Selina Kyle and that had been it for Gordon.

Gordon had handed Bruce a pass because he knew Bruce was good at heart and so didn’t even matter what Bruce was actually doing on that roof. But the Scarecrow was different. He was the one that broke into an insane asylum and teargassed his way into creating an army of unstable criminals. So Gordon being that blindsided had worked for Penguin. Penguin had gone into the police station with all the news cameras and he played Gordon. Gordon had thought the GCPD should be enough for the people of Gotham and so Penguin dared him to find/stop the Scarecrow.

The Scarecrow could very well frighten people into insanity. However, Gordon was the one that said people didn’t need to rely on Penguin and the GCPD was all they needed to feel safe. So that dare wasn’t a simple one and led Gordon down a road that Harvey couldn’t follow. Harvey couldn’t go with Jim on this one because he needed the support of the others if he didn’t want to be replaced as captain or worse have Penguin pick out the next captain, but it was a choice Harvey had to make and so Gordon had to see the bigger picture.

Gordon has been warned more than once that he should look at the bigger picture rather than keep his tunnel vision. But by the time he found out Harvey wasn’t going to support him, it had been too late for him to back out and that is if he would have. Gordon had a hard time letting anything go and so he was always going to after Jonathan because he was never going to give up on him. So Gordon went after Jonathan and he went into a house of horrors by himself yet he wasn’t scared and nothing Jonathan did changed that.

Gordon had gotten gassed and he had imagined seeing his ex cut her own wrists though he didn’t let the hallucination convince him to kill himself and woke up from it. So he went after Jonathan and he came across a young man that had been telling himself a lie. Jonathan had at first believed that his father had been trying to make him strong with toxin and that his father had been freeing the world except none of that had been true. Yet, Jonathan didn’t realize that until after Gordon found him and just wanted to talk to him.

Gordon figured the kid was confused and he was. Though confronting Gordon and watching Gordon overcome his own fears, Jonathan remembered that his father hadn’t loved him. His father had thought that he was weak and hadn’t cared if he killed his own son by using him for an experiment. So Jonathan did come around to accepting the truth however he wanted Gordon dead from making him remember that. And so Jonathan tried to use the rest of the hospital to kill Gordon and Gordon managed to fight them off by the turning on the water.

The water helped wash out their eyes and so Gordon only had to deal with people that wanted him dead because of what he did to them. However, Jonathan wasn’t the only one that Gordon had offended. There had also been people that Gordon arrested for one thing or another and then there were simply a couple of people that were in an asylum because they were insane. So Gordon was dealing them right as Jonathan eluded capture and Bruce went back to being a vigilante. Bruce hadn’t wanted to listen to Alfred or lay off following people yet Alfred was there for him.

Alfred was there for Bruce even when Bruce made mistakes like following the wrong group of people who knew they could trap the masked vigilante. Yet, Bruce came to appreciate Alfred’s council and they also found help in Mr. Fox. Fox had equipped Bruce with a new suit that that so happened to be bullet proof for whenever Bruce wanted to go “rock-climbing” again. So Bruce was slowly becoming more than a mere a vigilante and was actually practicing everything he needed to become the Batman.

But, Gordon hadn’t had as much luck as Bruce. He had failed to capture Jonathan and so Penguin announced he was a failure that couldn’t keep the city safe. So Penguin again pushed his agenda by saying the city gets better results when criminals police themselves and he also offered the police a chance to go work for him with a much increased wage. And so Gordon lost this battle however Harvey reminded him that they needed the other police officers to win the war.

So Harvey was trying to tell his friend that there was still a chance to defeat Penguin, but all he did was motivate Gordon into seeking out Falcone who knew could take down the Penguin.

And Gordon risking everything on a gamble couldn’t at a worse time because Barbara’s back and she’s now owns a gun-running operation with Selina, Tabitha and possible Ivy if Ivy didn’t overdose on the latest powerful potion!