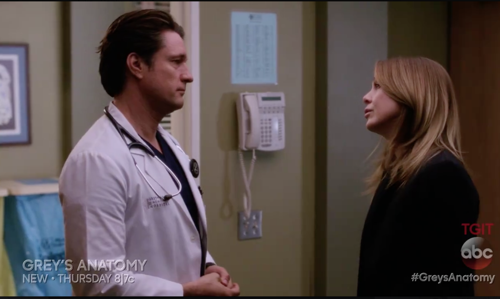 Tonight on ABC their hit drama Grey’s Anatomy returns with all-new Thursday, March 23, 2017, season 13 episode 17 and we have your Grey’s Anatomy recap below. On tonight’s season 13 episode 17 “Till I Hear It From You,” of Grey’s Anatomy as per the ABC synopsis, “Maggie’s mom returns to the hospital, but Maggie’s still in the dark about why she’s really there. Meanwhile, Owen and Amelia hash out their problems as they work on a trauma case together; and Bailey tries to mend her relationship with Richard.”

Diane Pierce was back in Seattle. However, she hadn’t told her daughter the truth and so Maggie still thought that her mother was going to have that boob job. The one that her mother swore that she wanted to do for herself and not for anyone else yet it was all a cover. Diane had lied to her daughter because she hadn’t wanted to tell Maggie that she had breast cancer and scare her daughter. So Diane’s plan in Seattle was to have her mastectomy and then think about the future as in remission before possibly some reconstruction.

Yet, Diane didn’t want to mention any of her plans to her daughter until she was in remission and therefore Jackson had to respect her wishes. She was his patient and she got to decide what was best for her as well as who would be in the know. So it didn’t matter that Jackson and Maggie were friends. He had to keep quiet and that meant pushing Maggie away. Maggie had wanted to look at her mother’s chart and she had wanted to know what size her mother was apparently going to get for her boob job though not knowing anything had simply drove her crazy.

Maggie went around the hospital complaining about her mother and how her mother didn’t need a boob job. Though Meredith and Amelia had thought what was happening was funny. They said that Diane probably wanted a larger cup size for sex because they didn’t see any other reason why her strict mother would suddenly make an about face over cosmetic surgery. So Maggie had asked them what she could do? She didn’t know if she should demand an explanation and Meredith was of the opinion that she should demanded one, but Amelia was different.

Amelia had said that she shouldn’t demand a single thing of her mother because it was her mother’s body and her mother’s decision. But Amelia’s advice was coming from her own situation with Owen. Owen had demanded that Amelia tell him one way or another if she wanted to be part of their marriage or not however, Amelia had thought that Owen was bullying her. She had told him that it wasn’t his right to make demands and that he couldn’t force her into a decision when she still needed time. So Amelia’s way hadn’t worked for her because it caused a huge confrontation.

Owen blew up at her and she had blown up at him. However, they both said things they didn’t mean and they finally got to the truth with the truth being that Amelia had already a baby and motherhood had been brutal to her when her child died. So hearing that had ultimately given Owen a better understanding. He hadn’t known that Amelia had been pregnant before or that she had a lost a child. And so all Owen knew was that he wanted kids and he had thought she was on the same page until she ran off.

So naturally Amelia wasn’t the one to be handing out advice and what she told Maggie hadn’t worked in Maggie’s favor because Maggie had gone to her mother trying to be supportive though that had left even more unprepared when Diane suddenly told her that she had cancer. Yet, Maggie had made her own mistakes. She hadn’t given her mother the opportunity beforehand to talk to her and then she had been quite upset when she had told the truth. Maggie had looked at the matter as if her mother and friend had betrayed when really they were both trying to do their best for her.

Jackson hadn’t wanted Maggie to be upset and he had convinced Diane in the end to tell her daughter the truth. Though Maggie had gotten angry at him because she felt he should have broken doctor/patient confidentially and she was just as hysterical about her mother. Maggie thought Diane should have confided in her despite the way Maggie last treated her mother when the other woman had visited her. So Maggie went out of her to blame or be angry at the two, but in the end, she realized that she wanted to be there for mom.

Maggie later read her mother’s files and she had found out how bad it was. But she knew that Jackson was a great doctor and so she told him that he better fix her mother however Maggie turned to Meredith for comfort. Meredith was there for her and was able to be the sounding board that Maggie needed. So she didn’t bother mentioning to her sister that she liked Riggs. Meredith and Riggs had started talking about what they see in each other and what they wanted. And, apparently, they wanted the same thing – dinner at first and then see where it goes!

The two were both widows and so they didn’t want to rush into anything before they were ready. However, it was pretty much obvious to everyone besides Maggie that they liked each other and they finally acknowledged that on tonight’s episode. So things were looking up for Meredith and she knew that she didn’t need to worry about Alex. Alex wasn’t going to be a problem for his friend’s love life and for that matter Richard also came around when he found out that Arizona was interested in Minnick.

Richard had made at first and he had said something he didn’t mean. Yet, he loves Arizona and will try to work through his own issues before he hurts her. So while everyone’s love life was in flux, a couple married for sixty years were unfortunately separated because the wife risky a surgery she didn’t need to buy more time with her spouse.

And so Stephanie grieved for the Clatchs because she thought they deserved better, but DeLuca ultimately admitted out loud that he loves Jo!