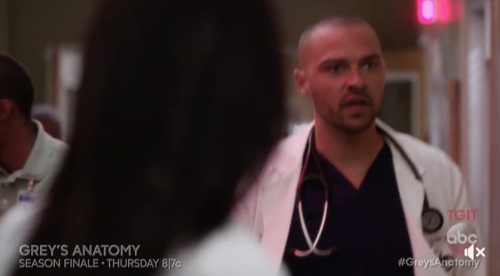 Tonight on ABC their hit drama Grey’s Anatomy returns with all-new Thursday, May 18, 2017, season 13 episode 24 and we have your Grey’s Anatomy recap below. On tonight’s season 13 episode 24 “Ring of Fire,” of Grey’s Anatomy as per the ABC synopsis, “In the 13th season finale, the doctors’ lives are at risk after a dangerous patient escapes the hospital room. Meanwhile, Alex (Justin Chambers) makes a hard choice in his relationship with Jo; (Camilla Luddington) and Meredith (Ellen Pompeo) has some big news for Nathan, (Martin Henderson) bringing things to a turning point.”

The explosion changed everything. It had doctors that were just leaving rushing back inside and they were able to do so because the fire had overridden the lockdown protocol and the doors were opened however the fire had also meant that the hospital was at risk. There were oxygen tanks all over the place and the explosion in itself could have compromised the building. So the fire department had asked that the hospital be cleared in the affected areas and as an added precaution Bailey was shutting down everything but radiology and the emergency room.

But Jackson had wanted to focus on finding Stephanie. He had blamed himself for leaving her alone with their patient that turned out to be a rapist and so he had wanted to find her before she could get hurt yet Stephani had been close to the blast when it happened and she had a slight problem on her hands. She was fine and could walk around only the little girl that she was watching had gotten stuck under some debris. So Stephanie was trying to free Erin even as the rest of the hospital including the police were searching for the two of them.

The police had been notified about the rapist and that Stephanie was last seen with him. Yet, they thought that Erin’s disappearance wasn’t connected to Stephanie’s case and therefore they were spending their time looking for the two separately rather than together. So that wasted time and resources though Jackson and Meredith were both doing their best to help. Meredith had found Erin a few times before when the little girl would wander off and so she had gone looking for her despite being told by Minnick.

Minnick had wanted them to follow protocol and leave the search and rescue to the professionals while they as doctors dealt with patients. Though both Meredith and Jackson decided to ignore Minnick’s rules and they went looking for people. So Richard had had to calm down Minnick and he told her that they had everything handled without needing anyone else however they both knew that he was covering for the others and so Minnick had gone along with his reasoning because there simply wasn’t enough time to do anything else.

So they focused on getting the patients out of the hospital and Alex had gotten back in time from spying on Jo’s husband to help with his patients that had to be evacuated. However, the fire was making several of the doctors nervous. Ben’s greatest fear was apparently getting stuck in a fire and he still pushed that down in order to focus on the patients he had to evacuate even if it meant that he had to carry them down the steps with another resident. And so Ben hadn’t allowed himself to spaz until he was outside with everyone else, but April had gotten him through it.

April had talked Ben through his fears and she had stayed pretty calm through her own when she found out that Jackson hadn’t evacuated the building like everyone else. But April wasn’t the only one that was concerned. She had noticed that Maggie had also been frazzled and it wasn’t until later when they were both yelling at Jackson after he finally left the building that April suspected Maggie might have feelings for Jackson although April didn’t seem like she was quite over Jackson to feel comfortable with what she saw or how she also noticed that Jackson reciprocated those feelings.

Yet, with Jackson forced to abandoned Stephanie, it hadn’t taken long before something interfered with Meredith’s own search. She had been searching floor by floor when she came across Riggs still working in an OR directly under the fire. He said that he had been in the middle of a surgery and that he had been forced to continue on or lose his patient. So Meredith helped him close the patient up and then they both had to get the patient out of there. Except afterwards there was another problem because Riggs had also had a hard time breathing. And therefore, it was never a good time for Meredith to keep looking for Erin.

Only she didn’t need to worry about Erin because Erin had Stephanie. Stephanie had gotten Erin into the stairwell and they had gone up because there was too much smoke as well as fire below them. So they had planned on going to the roof when Stephanie remembered she didn’t have her keycard which would grant her access to the roof and so she went back down in the smoke to get it just so that Erin wouldn’t have to die with her. And they were able to make it the roof and initially no one could hear them down on the ground however Ben had come to the rescue.

He hadn’t known that Stephanie was missing or that she was with someone dangerous because if he did then he would have told everyone that he remembered seeing the pair of them going down a hallway. So Ben felt responsible for not helping Stephanie when he had the chance and he grabbed a fire jacket because she had wanted to show the police as well as the firefighters where he had last her. But one of the reason Ben didn’t know that Stephanie was missing was because Minnick had forgotten to tell the police that she was still missing despite Jackson personally asking her to do it.

So Minnick was later called out on that after both Stephanie and Erin had been found alive. The little girl had lost a lot of blood and Stephanie had suffered significant burns while they waited for help though Minnick didn’t see what she did was wrong and she refused to take even the slightest of blame for what happened to the pair.

She said that she was sticking to protocol because she was doctor and they were her first priority. However, Bailey felt that was a cop out and that Minnick should have known better and was simply not taught better.

And so Bailey fired Minnick. She said that their residents needed to be taught by someone like Richard who had gotten Stephanie to the point she was willing to sacrifice her life to save a patient’s. But while Minnick got fired, Stephanie decided to quit because she couldn’t stay on at the hospital after everything that happened.

So Grey Sloan ended up losing two doctors on one day and Riggs had eventually found out about his wife. He hadn’t believed Meredith when she told him at first though, when he did, he was so happy that he apologized to Meredith because he knew that he was hurting her.

Though she told him it was ok because she knew it would have been the same for her if Derek could come back to her!