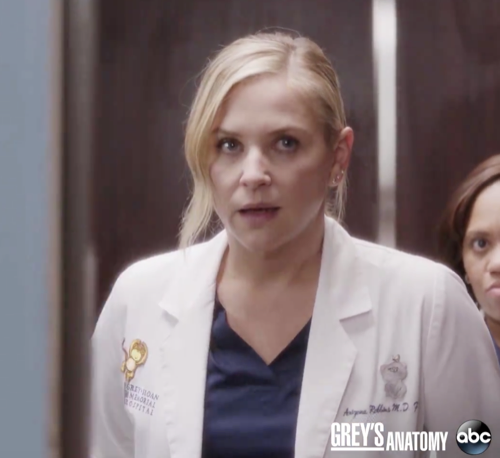 Arizona apparently had a patient that needed surgery and so she enlisted Jo and Bailey to assistant her. However, the patient couldn’t come to them because she was in a high-security prison hospital and so they had to go to her. The three of them had had to drive hours out of the way and then they also had to go through security. Things at a prison hospital were a little bit different than their own hospital so they had to be searched, their things had to be searched, and they had been given badges that they were told to never misplace. So Bailey had hated the fact that she got dragged to a prison hospital.

Though Bailey also thought that the hospital could have done better once she actually saw it for herself. She had seen that the hospital was understaffed and that the patients were practically ignored. So Bailey had hated going there and she had hadn’t liked their patient either. Kristen was considered to be highly dangerous and she had attacked her regular doctor in front of all of them yet Kristen’s lawyer had helped out a lot because she was one of the few people that could calm down Kristen. The lawyer didn’t show any fear and she had calmly told Kristen to remember their end goal.

The end goal it seems was for Kristen’s baby to be adopted by her mother and so Kristen couldn’t wait to give labor, but the doctors had told her that they were hoping to keep the baby inside just few more weeks. Kristen was thirty-one weeks and there was unfortunately a tumor sharing space with her baby. So that tumor which would have been a twin was sucking blood and nutrients from the viable child and Arizona had hoped that she could carefully detach the connection between the tumor and the baby without Kristen going into premature labor. Yet, Kristen needed to remain calm in order to skip going to labor and that was hard for Kristen.

Kristen was sixteen and emotional. She went from sweet as pie for her lawyer to a raging lunatic and so the doctors had wanted the lawyer to be around as long as possible. But Ms. Joseph had several other clients that she needed to visit and she had to leave the doctors to fend for themselves with Kristen. So the women had tried to put on a brave face however Bailey refused to stay in the room seeing as she had already gotten on Kristen’s bad side. And so Bailey chose to wander around the hospital to see if she could get any additional help from elsewhere and what she found were patients that needed her.

Bailey had left Kristen’s room because she thought that all prisoners were too much and so she had surprised her later when she helped treat a prisoner with an abscess. However, Bailey helping the hospital that was in worse shape than she was had gotten her to come down off her high horse. So Bailey and Dr. Eldridge who was the woman in charge of that unit had eventually seen the other’s side because Eldridge had first seen Bailey as a rich/spoiled doctor while Bailey had seen the other woman as a horrible administrator yet they were each outside of their comfort zone when they first met and that reminded Bailey that Kristen still was just a frightened teenager underneath.

Though what Kristen was going through had gotten worse in Bailey’s absence. Both Arizona and Jo had found out that Kristen’s mother had come to the hospital yet hadn’t wanted anyone to tell Kristen because she didn’t want to see her daughter. So Arizona and Jo had tried to keep the truth from Kristen and unfortunately Kristen figured out they were hiding something she ended up losing her temper. Kristen refused to settle down or stay in place during the surgery so she went into labor early. And as she was in labor, Kristen demanded to see her mother because she thought she could now have her mother at her side which created a problem.

So Kristen cried for hours on end. She had begged everyone to tell her mother that she would take it all back if she could and she cried about how all she wanted was her “mommy”. But the older woman refused to be moved. She had given Kristen everything with a big room, tv, fun days on the beach, and even the best private schools and she still didn’t know where she went wrong with Kristen. So nothing Kristen was going to say was go to change her mother’s mind however Bailey had told Kristen that she could hold her hand and that way she wouldn’t have to be alone. And so Kristen went into labor surrounding by strangers.

And in the end Eldridge had given the authorization to remove Kristen’s shackles so that the teenager didn’t have to give birth in pain though the birth of Kristen’s daughter had been bittersweet. Kristen had known that her mother would never let her see her daughter again and so she had been forced to say goodbye. However, she knew letting go of her daughter had been what was best for the baby even if her mother wasn’t going to keep the name that Kristen picked out. So the doctors had left the prison hospital together just feeling depressed and Bailey, seeing as she had wanted to tell them before they got back, she said that Alex had taken the plea agreement with ADA.