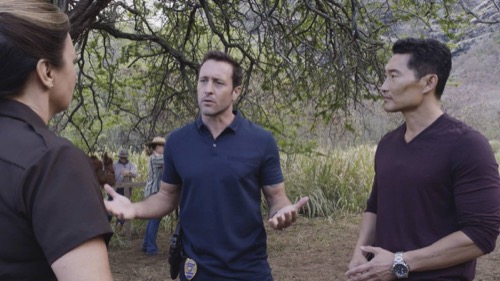 Tonight on CBS Hawaii Five-0 air with an all-new Friday, February 10, 2017, episode and we have your Hawaii Five-0 recap below.  On tonight’s Hawaii Five-0 season 7 episode 16 as per the CBS synopsis, “McGarrett (Alex O’Loughlin) and Danny (Scott Caan) celebrate Valentine’s Day with their girlfriends, while the rest of Five-0 investigates the murder of a man taking a class on how to land women.”

The guys had wanted to make Valentine’s Day special. McGarrett and Danny had both decided to plan a romantic weekend with their girlfriends at a hotel and they had merely wanted some couple’s time. But their girls it seems had had other plans. The ladies had somehow tricked their guys into booking rooms at the same hotel and the worst part about it had been the conjoining door that meant they could walk in on each other at any moment. So the guys had hated their surprise and they had wanted to find a way to get out of it however Chin had told them that Five-0 had gotten a new case and that it was ok because he thought they could handle it on their own.

Chin had apparently thought he would ruin their weekend away from it all and so he hadn’t wanted to disturb them. However, he had instead made sure the guys had found themselves stuck with each other and so the guys tried to make the best of it. They went along with the couples thing and did activities yet there had been an incident with some rude kid. The kid had thrown his Frisbee at Danny’s but and had refused to apologize for it. So Danny had thrown the kid’s Frisbee into the ocean and the brat had retaliated by stealing his sunglasses. And, well, it was all juvenile and Danny should have known better than to engage.

Yet, Danny had tried to get those sunglasses back and the kid had screamed that he was being touched inappropriately. So McGarrett had had to drag Danny away before they both got arrested over sunglasses that weren’t worth more than twenty dollars though his friends back at headquarters at least managed to do something better with their time. They had identified the victim as Jeremy Holden. Jeremy had last been seen hanging out at the bar with his supposed mentor Black Stone. Black Stone was a guy that taught classes on how to pick up women and he had said that he had taken Jeremy to the bar in order for the other man to try out “The Method”.

“The Method” was he called his services in getting higher self-esteem and picking up, but Black Stone had unfortunately pointed out a girl to Jeremy that he thought would be her perfect fit and poor Jeremy had ended up dying that same night. So Black Stone had been asked about the girl because they Five-0 had wanted to get a name. Though Black Stone had said that he hadn’t known a single thing about the woman other than she had looked hot. And so the guys had asked around at the bar and they had been told that the woman in question had looked like a pro. Pro, of course, being a politer of saying prostitute.

The good thing about prostitutes however is that they’re more likely to have a record. So the guys quickly found the woman that was last seen with Jeremy and Lou even had a connection with her madam. Lou had once arrested Cordelia Martin for running a prostitution ring and he knew that she was back to her old tricks. But Cordelia had said that Vanessa had found a new scheme and it turns out the new scheme involved. Stone. The legendary ladies’ man that knew how to get any woman he wanted had hired prostitutes so that his clients would believe that his stupid method was working. And all along it was just a con.

However, Stone couldn’t have just made it easy for them by telling the truth the first time around. So the guys put him in the box until he talked and gave up where Vanessa lived yet Vanessa wasn’t there and her friend wasn’t worried about her. She said Vanessa would have come back and she thought that Vanessa’s stalker might be the reason why Vanessa was suddenly gone. She said that there was this guy that couldn’t understand that Vanessa wasn’t interested in him and that he kept contacting Vanessa all the time believing he could change her mind. And so Five-0 had tried looking into Vanessa’s life to see if there might be an ex in the picture and they found nothing.

There wasn’t any indication that Vanessa had been involved with anyone and so the one piece of evidence they had was the many ways that this guy had contacted her. So that traced that back to a guy named Neil Ware and surprisingly Neil had been one of Stone’s clients that had thought what happened with Vanessa had been real. Yet, Vanessa had gotten away from her captor and had time to call for help so Neil had never gotten the chance to hurt her though he did find out the truth the hard way. Vanessa had told Neil everything while he held her captive and so she had heard him say that he was going to punish both her and Stone for conning him.

So after the police were able to secure Vanessa, they raced across town to save Stone and they had managed to bring down Neil without hurting him too bad. Though Stone didn’t learn anything from what nearly happened. He still hit on Kono because he said her wedding ring wasn’t a deal breaker for him, but the guys did find out Jeremy’s killer and they had done it without McGarrett and Danny. The two missing detectives had gotten into an ongoing with the bratty kid that Danny swore took his sunglasses and had actually broken into the kid’s hotel room that he shares with his parents. And so Danny had been forced to pay for the family’s dinner when he didn’t find the sunglasses and it was later revealed the glasses had been in his hotel room the entire time.