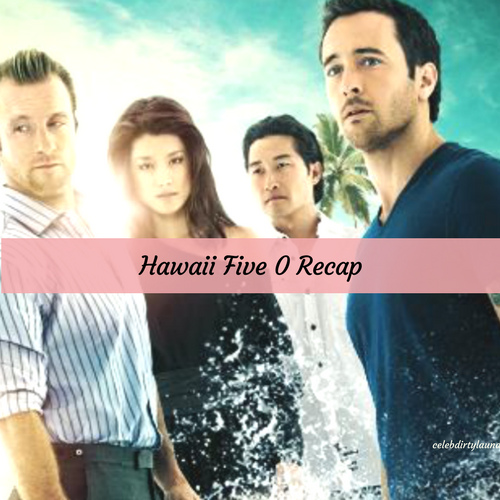 Tonight on CBS Hawaii Five-0 air with an all-new Friday, April 7, 2017, episode and we have your Hawaii Five-0 recap below.  On tonight’s Hawaii Five-0 season 7 episode 21 as per the CBS synopsis, “McGarrett and Five-0 are captured and face certain death after tracking a dangerous nemesis to the Island of Lanai. Meanwhile, Grover takes his son to Chicago where he testifies against a dirty cop from his past.”

A ship in distress had believed they were doing to be rescued when they saw another passing ship answering their mayday call. But when the couple boarded the second ship, they weren’t greeted by anyone and they couldn’t find a single person at first. So they went looking around the ship to see if anyone was actually there and unfortunately they did find the crew however the crew had all been murdered and there wasn’t any sign of the perpetrator so the mysterious murders was later passed on to Five-0.

However, Five-O wasn’t working with a full team. McGarrett had had his physical and his doctor had told him to stick to light exercise so that meant he couldn’t do things that were normal to him. Like jumping out of planes or diffusing anymore radioactive bombs. So McGarrett was light duty and Danny was never going to let him forget it yet the team was also short another member because Lou went to Chiago. Lou apparently had to stand witness in some trial or another so he thought that he should turn his time away into a boys’ weekend with his son.

Lou had wanted to use his weekend to bond with his son and just have some fun away from their cell phones and responsibility. Yet, Lou had been surprised when a young officer was assigned to follow him around for his own protection because he didn’t think he needed one. So Lou had tried to say that nicely. He explained that he could handle himself and that he didn’t comfortable with anyone watching him though the officer that had been assigned to Lou hadn’t cared about what Lou thought because he hadn’t liked the whole business with what happened between Lou and Clay.

So Lou had had to put the young man in his place and say he did his job even when others betrayed him and risked his family, but Lou had mentioned that if the officer wanted to stick around that the rules were that he kept his mouth shut because he didn’t know Lou. Though the team back in Hawaii weren’t doing so well without any kind of backup. They had found out their ship had contact with a fishing troller and that it was the last time the crew had reported to their boss. And so the team had believed organized crime was involved.

The ship was near a supposedly unhabituated island when they had been found. So Five-0 thought maybe they had killed everyone because they hadn’t wanted any witnesses to what they might be doing however Jerry had done some work for the team and he had found out that Michelle Shioma was also connected. But up until that time, everyone had simply assumed Michelle fled the country in order to evade arrest so they figured she must be hiding out on the island as well. And decided to go out there to look for her when things took an unexpected turn.

Shioma’s men had found Five-0 before they could get the drop on them. So McGarrett who really shouldn’t have gone with the others had been thrown into a cage with his team and hadn’t been able to get word out to Jerry in time. However, Jerry was suspicious by nature and he knew something was automatically off when he wasn’t hearing from anyone so he tried going over his options. He knew that he could turn to the HPD yet the team had believed that Shioma had had a man on the inside so Jerry thought about going to their new ME.

The fact that she was new meant she didn’t have allegiances and so that made Jerry feel comfortable enough about confiding in her. Yet, Jerry hadn’t found much help with a Medical Examiner and he had ultimately turned to Lukela because he knew that the police were needed. So one of the first things that Lukela had had to say to Jerry was that he had his guys that he knew without doubt weren’t in Shioma’s pocket. And so Jerry risked everything to get Five-0 the backup it needed though it had come at a cost because Jerry had been told not to mention the mission to anyone.

Though Jerry hadn’t cared about because all he had been thinking about were his friends. Five-0 had gone to the island unprepared and they had been thrown into a cage without any possible way of getting out, but McGarrett had luckily thought of something. He knew that if he could just get out of the cage and be near enough to the armed guards that he could grab a bullet off one of them. So McGarrett’s plan had been to use that bullet’s gunpowder to cause a minor explosion that would break the lock on their cage.

So McGarrett had gotten out by telling the guards he could pay them if they let him and his team go. He said that Michelle Shioma had left behind twenty million on the big island when she fled and that he could gain access to it if his team was safely freed however Shioma had showed up and claimed that she hadn’t left money behind so that sort of ruined one part of McGarrett’s plan and fortunately he was able to work with what he had. But McGarrett turning on the guards and getting beaten up just to get a single bullet had seemed crazy to Danny.

Danny would have preferred if McGarrett had gotten a gun yet he was willing to take what they could get so the guys later broke out of their prison. However, Michelle had taken her troller out to the water and she had left her men behind to kill the team. So the eventual arrival of HPD came at the right time because it saved the team and it turns out McGarrett wasn’t even all that made with Jerry seeing as Jerry saved their lives and had also given them the opportunity to capture Michelle Shioma.

Shioma hadn’t gotten far with her ship when HPD found her. So she was brought in and was told to go quietly for the sake of her daughters that Five-0 did find in hiding. Yet, the team they wouldn’t have gotten Shioma without Jerry so Jerry had finally got his badge. He had been part of the team anyways though now it was official. And while Lou’s homecoming hadn’t gone well seeing as everyone hated him for turning on Clay Maxwell despite Clay trying to kill him – he managed to bond with his son who realized Lou was feeling down and had wanted to help.