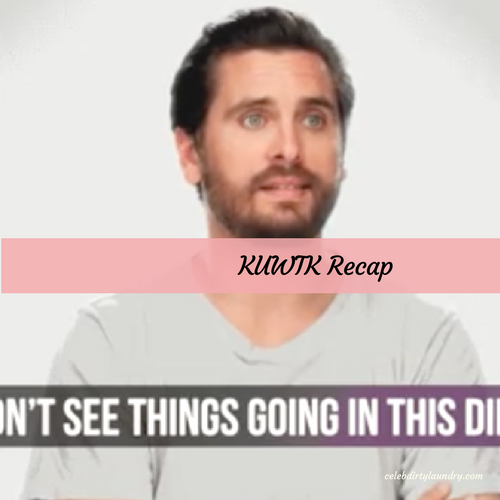 Tonight E!’s most-watched series Keeping Up With The Kardashians (KUWTK) returns with an all-new Sunday, April 16, 2017, season 13 episode 8 and we have your KUWTK recap below.  On tonight’s KUWTK season 13 episode 8 called, “Guilt Trip,” as per the E Online synopsis, “Scott becomes devasted when he hears a rumor about Kourtney; Kim returns to work and fears she might not be cut out from her public lifestyle; Kendall gets upset with Caitlyn when her efforts to spend time with her dad are taken for granted..”

On this week’s episode of Keeping Up With The Kardashians Khloe, Scott and Kim are hanging out at Khloe’s house. Kim asks Scott “How was Aspen? You guys were posting these really cute videos and everything.” Scott tells her “It was great. We had a really great time and it feels like we were a family.” Kim asks “Does Kourtney know that you bought her a ring to propose?” Scott says “Yeah, she found it. We talked about it and decided to just put it aside and never talked about it again.”

Caitlyn goes to visit Kendall. She tells her “The barn is finished at my house.” Kendall says “We need to get some horses to put in there.” Caitlyn says “If I get horses will you and Kylie come out and ride them?” Kendall says “I will, but I don’t know about Kylie.” Caitlyn calls Kylie and asks her about coming out to the barn and she says that she will. Kendall and Caitlyn then go online to start looking at what type of horses they want to buy.

Kim is preparing to go back to work after everything that happened in Paris. She is getting ready to go overseas to India for a fashion show and she is very nervous. She tells Scott and Kourtney “I decided to get back into the social media aspect of my life so I snap chatted a cute little family pic of all of us. The response was super positive so that helped.” Scott asks her “Are you nervous about the fashion show overseas?” She tells him “Yeah, because it isn’t some local event. It is overseas and it’s not just some local event.

When they get to India they stay at the Atlantis Palm Hotel. Kim has her friends Stephanie and Simon with her in addition to her family. She says “I love having my circle with me. It makes me feel more comfortable.” When they get to the hotel they are all impressed by the suites. Scott is staying in the aquarium room. He is blown away by the opulence.

Kendall and Caitlyn are out shopping for horses to put in the barn. Kylie didn’t show up. Caitlyn calls her and tells her “Hey daughter who didn’t show up. We may end up buying you a horse since you didn’t come.” Caitlyn wants to take pictures to send to Kylie. Kendall is upset and feels neglected because Caitlyn is obsessing over the fact that Kylie is not there rather than focusing on the fact that she is there.

The group in Dubai is out to dinner and Kim is still extremely anxious. She says “I can feel the sense of people being around me, calling my name and taking pictures of me being amped up times ten. I don’t want to become this crazy person who feels that people can’t take my picture. It’s a public restaurant. Why can’t they?” However, it is still obvious that Kim’s anxiety is idling on ten.

The next day everyone is out to breakfast and there is a rumor circulating that Kourtney is hooking up with someone else. Everyone is sitting around the table discussing it. Kim says “I feel really bad for him because they had such a great time in Aspen and he isn’t hooking up with anyone else.”

Scott is doing a public appearance and he is devastated about the rumor that Kourtney is seeing someone else. He says “I called her about it and she blatantly lied to me. I just didn’t see things going in this direction. Everything I have been working for is down the drain.”

Kim is shopping at the Givenchy Store in Dubai. There are tons of paparazzi outside the window with cameras trained on her and people gathering around. She begins to feel anxious. She says “This is what I am afraid of. That so many people will know where I am and gather around and be like Kim is here!”

Caitlynn shows up at Kendall’s house and once again she is ranting about how Kylie hasn’t been around. Kendall finally gets fed up and says “You sure do talk about the fact that Kylie isn’t here a lot and it really hurts my feelings.” This stops Caitlyn in her tracks. She tells Kendall “I do talk about it a lot because I feel insecure and I worry, but I do appreciate you being here for me.”

Kim receives a text letting her know that Scott is drunk at the hotel. She immediately calls Kourtney. Kourtney says “It’s not my problem anymore. I can’t control a person’s behavior anymore.” Kim tells her “I think this has to do with what he heard about you.” Kourtney says “We’re not together anymore and I’m not the sober police.” Kim seems to be a bit appalled by her sister’s behavior and attitude. She tells her “OK. I have to go.” and hangs up the phone. Her friends can’t believe how cold Kourtney is about the whole situation.

Kim is nervous for her first public appearance since the robbery. She says “I don’t think I can ever do another book signing again. I don’t see the world the same anymore.” Kim wonders “Is doing all of this worth all of the anxiety that it brings about?”

Kim’s anxiety takes even greater hold as she waits backstage to do her public appearance. When she steps out on stage the crowd greets her enthusiastically. She manages to answer the questions beautifully and get through it. She says “I know the fear is in my head and I have to get through it.” She says “After a minute I warm up and it feels like it used to. I don’t feel all the way safe, but I definitely feel comfortable.” She takes some pictures with the fans and seems back in her element.

Khloe and Kourtney are hanging out. Kourtney tells her sister about Scott falling off the wagon and drinking in India. Khloe says “They’re never accountable for their own actions. They always want to blame someone else.” Travis Barker shows up at Khloe’s house with his kids to hang out for a bit.

Back in Dubai everyone is preparing to go on a fun adventure. Kim is suspicious that Scott has a girl hiding somewhere in the room when she sees a bag in the room that doesn’t belong. Kim decides to take a picture of the aquarium to try and spy. While they are looking around Scott whispers to one of the producers “There’s a girl downstairs.” Jonathon has to go to the bathroom. Kim says “Go because it’s a 45-minute drive where we are going.”

When he tries to get into the bathroom it is locked. Scott is still pacing. Kim says “Do you think we should go bang down the bathroom door and scare the crap out of her? I’m not stupid. Should we scare her?” Kim opens the door and tells the girl “Get your stuff and security will escort you out, groupie!” This is far from over! What will be the fallout from Scott’s Dubai adventures?