BY Latrese Garner on May 7, 2017 | Comments: Leave Comments
Related : Keeping Up With The Kardashians, Reality TV, Recap, Television, TV 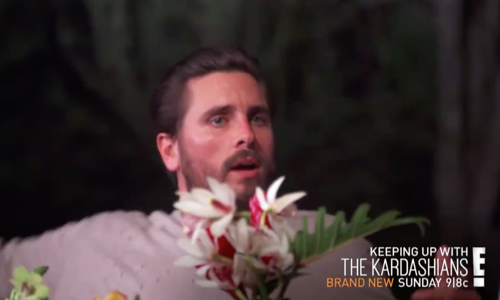 Tonight E!’s most-watched series Keeping Up With The Kardashians (KUWTK) returns with an all-new Sunday, May 7, 2017, season 13 episode 9 and we have your KUWTK recap below.  On tonight’s KUWTK season 13 episode 9 called, “Family Trippin’ – Part 1,” as per the E Online synopsis, “In the first part of a two-part arc after Kim busts Scott with a girl in Dubai, the family is surprised Kourtney allowed him on the family trip; the sisters discover Scott has invited yet another girl to join him in Costa Rica, the family decides it’s time for Kourtney to confront him.”

This week on Keeping Up With The Kardashians Kim is on the rampage when she finds a girl in Scott’s room. She tells Scott “We’re gonna go by ourselves and I’m gonna enjoy the rest of my time in Dubai.” Scott is upset. He says “What?” Kim tells him “It is not ok that you made me feel bad for you when you heard a rumor about Kourtney and another guy.” Scott says “It wasn’t a rumor.” Kim disses him and everyone heads out on the adventure without him.

The group heads out to ride camels and dune buggies in the Dubai desert and has a great time. At the end of the day everyone is tired and happy. Kourtney calls Kim and Kim tells her “I feel bad that I made you feel bad about the whole situation.” Kourtney asks “When do you guys get back here?” Kim says “Tomorrow.” Kourtney says “Good I have another full day without him. I think we need to figure out a better way to separate our stuff.” Kim tells her “Yeah you guys do because you don’t need that.”

Kim also goes to visit a children’s hospital in Dubai. She says “Seeing these children and the people who work there makes me realize that there are positive people in the world. I am slowly working to get my life back on track.” When she gets back to the hotel Scott texts Kim to talk to her about the situation with the girl ln the hotel room. He tells her “I have a right to move on. She was with another guy and that’s fine, but the only time I hear anything about her is when it’s something negative.” Kim tells him “I don’t want to be in the middle of it. I have to be the one to tell Kourtney and that’s not fair.” Scott says “I understand, but I have the right to move on because she is doing the same thing.”

Everyone has returned to Los Angelas. Kim meets up with Kourtney. She tells her “I don’t want to start anything but Scott was really drunk and then he met up with me the next day and we had a nice talk.” Kourtney says “It’s his fault we’re not together.” Kim tells her “Where you make your mistake is that you go on trips with him and give him the impression that you two have a chance of getting back together.” Kourtney says “I know. I think we just need to separate.”

The family is getting ready for a trip to Costa Rica. Khloe says “I love my family and I love our family trips.” Kris asks her “Is Kylie coming?” Khloe tells her “Yes.” Kim is nervous because the robbers from Paris have been caught. She tells Kourtney “I feel better and relieved. Now I just know that I have to be aware of what I share and where I go.” She also tells her sister “I have to go to New York from Costa Rica to meet with the French judge so that I don’t have to go back to paris.”

Everyone is boarding the flight to Costa Rica. They are flying on two seperate planes. Kendall and Rob did not make the trip because Kendall had to work and Rob is busy with Dream. Kourtney is not happy that Scott is on the trip and Kim is still dealing with her worries about meeting with the French judge in New York to give her testimony. Kris is also still upset about Caitlyn’s book.

When they land Khloe and Kim are talking about the situation with Kourtney and Scott. Khloe says “They are separated and they can do what they want, but she leads him on. They take vacations together and it definitely gives him the wrong idea.” Kim agrees.

They get to the house and everyone is amazed. Khloe has arranged for there to be a special show of fireworks and the kids love it. Scott is not staying at the house. Corey asks him “You’re not staying at the house?” Scott says “No. I am staying at a hotel down the street because it is annoying that the girl that I used to be with is right down the hall and I can really start to annoy myself.” Meanwhile, Khloe gets upset when Kylie and Tyga try to hijack the bedroom she has already chosen for herself when she picked out the house.

The next day Khloe is in a much better mood. She asks Kris “How long have you and Corey been dating?” Corey tells her “Three years.” Kris moves off to the side and Khloe asks her “How come you’re sitting over there?” Kris just wants to relax. Kris asks her about Cleveland and Khloe tells her “It’s great. I would take him on a private vacation, but I don’t want him on camera anytime soon. Our lives are so great right now.” Kris agrees.

After breakfast, everyone heads out to the dinosaur park that Scott found for the kids to enjoy. Kourtney says “No matter what is going on with me and Scott having him there to enjoy these moments with the kids is super important.” Scott says “There are definitely two ways of looking at the relationship with me and Kourtney. We have these amazing moments with the kids, but we don’t have the other side of the relationship at night and that can be frustrating.”

Khloe is frustrated because she wanted the family to spend the first day together and everyone went off to do their own thing. Later that day Kim reveals to Khloe that Scott flew a girl out to Costa Rica. Khloe is very upset. Kim says “We have to tell Kourtney because I don’t want to do anything behind her back.” Khloe agrees but she wants to confront Scott. Suddenly Kourtney comes upstairs. Kim tells her “I have something to tell you. You need to sit down.” She then tells Kourtney “Scott brought a girl out here.” Kourtney says “For what?” The sisters then tell Kris. Kourtney says “I’m not going to dinner if he’s bringing her to dinner.” Khloe asks “Should we just tell him dinner is canceled?” Kris says “No, don’t cancel dinner.” Kourtney says “Just cancel him from dinner.”

When they get to the hotel Kourtney says “I really don’t think I could get back together with him.” Khloe says “Is this your epiphany?” Kourtney says “No. I already had the epiphany. I deserve someone with some morals.” Khloe is gung ho to confront Scott. Kourtney says “Khloe don’t do this to me.” Khloe tells her “I love it.” Kourtney says “I know you do. I just want to deal with it later.” As they are talking Scott walks in. Kris greets him and asks “Do you want to switch places with me?”

They start talking about the trip to the Springs. Kris asks him “Are you going to the Springs tomorrow?” Scott says “Sure. What time do you want me at your place?” Kris tells him “About ten.” All of a sudden Khloe asks him “What are you doing for the rest of the night Scott?” Scott says “What I have to.” Khloe asks him “What does that mean?” Kris says “Cut the crap. We want to know if you have a girl here and why.”