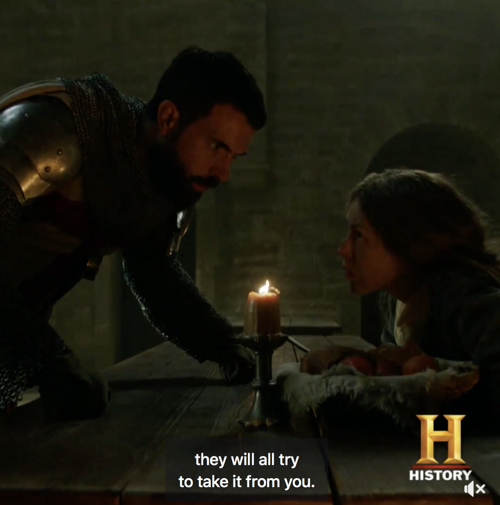 Tonight on HISTORY their new drama series Knightfall premieres with an all-new Wednesday, December 6th, 2017 episode and we have your Knightfall recap below.  On tonight’s season 1 episode 2 called,  “Find Us the Grail,” as per the History synopsis, “Landry and Parsifal search for a killer. Meanwhile, the unexpected arrival of Pope Boniface in Paris threatens De Nogaret’s carefully laid plans.”

A young Landry is called forward by Godfrey (Sam Hazeldine), where a body lay for a funeral. He wants to know why the Templars didn’t run. He is told the Templars didn’t run so people in the city are safe for another day, as a man of faith, death is not the end; it is just a passing, like through a door to somewhere new. He reminds him that when he dies too, he will go through, it won’t be far and he will be waiting for him.

Landry (Tom Cullen) walks to the front of the church where he is greeted by King Philip (Ed Stoppard), who offers his condolences and asks if there is anything he or his wife, Queen Joan (Olivia Ross) can do for him. Landry assures him that the Templars will find Godfrey’s killers and bring him home; Philip offers the help of the Royal Guards. Queen Joan learns that Landry is hopeful and that something extraordinary has happened, he hopes to meet her tonight and explain but before going into any more details, Philip rejoins them and Landry announces that Pope Boniface VIII (Jim Carter) is coming to Paris today.

The Pope arrives and Landry bows down, kissing his hand. He offers his condolences. They walk towards the chapel, as Landry confirms there were 5 men responsible for Godfrey’s murder. He does the sign of the cross when he sees the stone with the symbol of the grail. He turns to Landry and surprised to learn that the Grail is in France, ordering Landry to search all of Godfrey’s personal effects and commanding him to say nothing of this to anyone.

Landrey and Pope Boniface VIII join all the Knights but before he can announce it; Landry says he is not ready. Pope says he is and asks for Landry’s sword. Landry kneels as Tancrede (Simon Merrells) gives the sword to the Pope, he taps Landry’s shoulders and orders him to rise, naming him “Master of the Temple” and whispers in his ear to “find us the grail!”

The Knights come to the farm to retrieve Godfrey’s body, as the Friar says it is sacrilegious to dig him back up, but they have orders to give him a proper burial. They find that his grave is empty. Isabella (Sabrina Bartlett) comes to see her father, King Philip, who says she is still a child, asking her to trust him and her mother, even though she wants to marry Prince Lluis (Marcos Franz), they want her to marry Prince Edward; William De Nogaret (Julian Ovenden) interrupts them, after he promises to choose carefully.

Landry learns that someone stole Godfrey’s body; they are sure it’s about the Grail. Tancredo wants him to stay behind, but Landry says this is his mistake to make and leaves anyway. Meanwhile, Parsifal (Bobby Schofield) is having his love, Marie buried. He wants justice served on the men who tortured her.

Queen Joan sits with King Philip, while De Nogaret makes him feel uneasy about the Pope. Rodrigo of Catalonia (Enrique Arce) presents them with gifts as Robert, Earl of Oxford, giving them lasting peace. King Philip is torn and says he will take the advice from the Pope, as his arrival is surely a sign from God. Parsifal is stopped from searching for the highwaymen who killed his Marie, as he is promised the Knights will get them.

Queen Joan thanks the Pope for meeting with them; Isabella rushes into his arms and says she hopes to be Queen of Catalonia. They admit they want to adjudicate. De Nogaret wants to give the Pope counsel, who asks if he has found God yet and brushes him off. The Knights continue to look for Godfrey’s body and killer, when they go to get Parsifal, they realize he escaped from the house through the back and chase after him. Gawain (Padraic Delaney) stumbles and promises to catch up. Landry finds Parsifal telling him this isn’t just his fight. He says he isn’t waiting for them as the man who killed the woman he loves can get away and runs off.

Parsifal finds most of the men sleeping but one is awake; Landry knocks him out, saying this is why he told him to wait. Joan speaks to the Pope saying the English match will only make Isabella miserable. She begins to cry, saying she is not a strong woman and leader. She is a sinner. He promises her that she will get what she wants, telling her not to fret. He begs her not to talk like that, even in confession.

De Nogaret enters as the Pope asks if he is there to confess his sins, he jokes that would take all year. De Nogaret says he is there inquiring if he has made a decision on Isabella’s marriage announcement. His Holiness says a marriage is between a man, his wife and Go; he hasn’t made any decisions either way.

Landry is questioning the man about where Godfrey’s body is. He says Roland (Cengiz Dervis) was the one with the crossbow, but when he won’t tell them were Roland is, Parsifal punches him, knocking him unconscious. Landry says they will find Roland and tells Parsifal he needs to listen to him. Meanwhile, De Nogaret convinces a guard, offering him a monthly purse of coins plus a house by the river, to make sure the Pope doesn’t make it to the palace to announce his decision on who Princess Isabella should marry.

Parsifal sees that the highwaymen are desecrating Godfrey’s body, he disobeys Landry and slams his hand on the wall. Landry is forced to fight the men downstairs as Parsifal fights the men upstairs. They call him by his name, saying Marie called out for him as they had their way with her. Parsifal takes the cross and kills the man stabbing him through his mouth. Gawain and Tancrede arrive to help Landry but when Gawain is cornered, Landry saves him which only angers him. Landry finds a distraught Parsifal who says that man raped Marie, that is why he killed him.

Isabella comes to see De Nogaret, wondering if Lluis is two-faced. De Nogaret says every man is like hat – the man he wants to be and the man he really is. As De Nogaret talks to her, promising that he will see to it that she will be one of Europe’s most powerful Queens, his man prepares his knife as he follows the Pope through the crowds in Paris. He swears that no man will dare mistreat her. She tells him not to laugh when she says that as a girl she dreamed of being his wife.

During dinner that night, De Nogaret assures the King and Queen that he did give the Pope the invitation. He arrives late and apologizes for his tardiness, but reveals that his decisions is that Princess Isabella should marry Prince Lluis of Catalonia. After dinner, she feels like the luckiest girl in the world and king Philip remembers how giddy Joan was at that age. He asks if she will join him in his chamber tonight, but she declines, saying she will join Isabella for tea and begin wedding preparations. He begs her to tell him there is still hope for them; she reassures him, saying he is her husband and her king, but he doesn’t look convinced.

De Nogaret is interrupted when Rodrigo of Catalonia comes into his chambers with a token to remind him that Catalonia can be a powerful ally. He puts down the chest and when he opens it, it has the traitors head inside.

Landry and the Knights return with Godfrey’s body. Parsifal looks like they respectfully carry his corpse inside the church. Landry tells Parsifal he can sleep there tonight and tells him maybe it is the time he found a new home and family, offering him to join them. Parsifal says he isn’t fit after what he did today; Roland is still alive and Marie is still dead. Landry says there is a place for him there if he wants it; telling him to get some sleep.

Landry confronts Gawain about today. He says his leg, and he have become a hindrance. He doesn’t want him to hang up his sword, instead, he wants him to train the new knights. Gawain says he hurt himself protecting Landry, who is grateful. Gawain says he will always be sorry he didn’t let Landry die that day on the docks and storms off.

Pope Boniface VIII is looking at the artwork in the chapel when De Nogaret comes to see him. He tells the Pope about the “gift” he received, but the Pope says he will pray for the man who gave it to him. De Nogaret wants to know the real reason he came. The Pope says wicked men always see wickedness. De Nogaret feels the Pope is dangerous to both the King and France, but leave before he can say anything else.

Gawain sits in a tavern and drinks. Queen Joan prepares her room, unlocking her window; but Landry is stopped by Tancrede saying it has to do with Godfre, Landry feels it can wait but then changes his mind and goes to see Draper (Nasser Memarzia) instead, saying if a Brother is calling he should answer.

De Nogaret finds Gawain drinking in the tavern; saying he always felt that he was the true hero and should be the leader, not Landry. He suggests there is a place for the bravest and most heroic Templar in the King’s guard for someone of his stature. De Nogaret says he can help him as the King has the finest doctors in all the land, and in return, he would need information. He pours him another drink, asking what he knows about the Pope’s real reason to visit.

Draper tells Landry there was nothing on Godfrey’s body, the Pope says if there is anything he may have swallowed it and tells Draper to cut him open, as, during the Crusades, that is what they did. Gawain asks De Nogaret what does he know about the Holy Grail as Queen Joan leaves her room, no longer waiting for Landry. Draper removes a key from Godfrey’s belly.