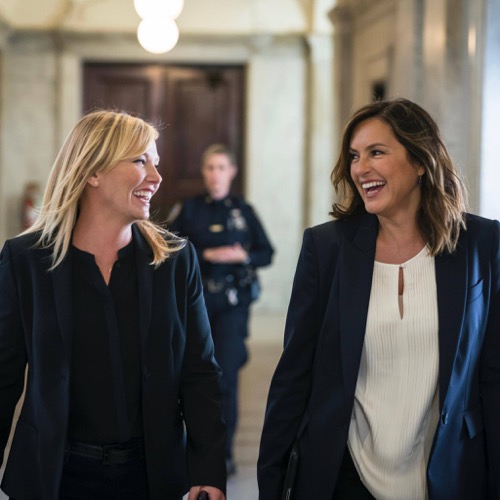 Tonight on NBC Law & Order SVU returns with an all-new Wednesday, October 18, 2017, episode and we have your Law & Order SVU recap below.  On tonight’s Law & Order SVU season 19 episode 4 as per the NBC synopsis, “A teenager disappears after schoolmates make her the subject of a vicious cyberbullying attack.”

The show opens with Mandy completing her live online blog. She is a sophomore in high school and documents her daily life. All of her posts are full of fun and laughs with her friends until she posts about the worst day of her life. She says she is done with school and all of her so-called friends. She is obviously upset in the post. Her parents’ show the post to Rollins and Cressie and say they haven’t seen her since the post was made that morning. The post also shows a picture of Mandy passed out in her underwear with nasty things written on her body.

Rollins shows the video to Olivia and tells her the photo has been spread throughout the school. They have a record that Mandy sent a text a boy named Andrew 10 times before she disappeared. Olivia interviews Mandy’s parents and they say she was very excited to attend a party over the weekend and that Andrew is her best friend. Cressie interviews Andrew and he denies knowing anything but tells Cressie to interview Mandy’s best friends. Rollins interviews Stacy (one of Mindy’s friends). Stacy tells Rollins that Mandy is with a guy she met online. The team tries to trace Mandy’s contacts online using her computer. As they work Mandy goes live

Mandy’s friends). Stacy tells Rollins that Mandy is with a guy she met online. The team tries to trace Mandy’s contacts online using her computer. As they work Mandy goes live online. She has pierced her nose and dyed her hair. She tells her parents she can’t come home and that she is in a better place now away from all of her fake friends.

The team gets an address from where Mandy made her blog post and head out to find her. When they arrive it is Ethan Cohn’s house. The man she was talking to online. Mandy is fine but doesn’t want to go home. Ethan tells the police that not only was Mandy written on when she passed out, she was also raped at the party. Mandy is taken to the hospital and tells Olivia and Rollins she doesn’t remember what happened at the party. She said she smoked a joint at the part which is something she never does. She says everyone at school thinks she is a slut. The only

The only thing she remembers is taking a cab home and waking up to see the black marker all over her body. She was sore down there and was bleeding. She tells Olivia she didn’t consent to have sex. Cressie interviews the boy (Daniel) who had the party and he says there were only 3 boys and 3 girls at the party. Andrew, Daniel, and Max were the boys. Max admits to drawing on Mandy and taking the photos but denies raping her. Andrew also denies the rape. Rollins tells Max and his dad that they have him on federal child pornography charges for taking the pictures and sending them out. They will charge him if he doesn’t start taking.
Max and Daniel finally tell the team that Andrew was the only one alone with Mandy. While there is no DNA Barba decides to arrest all three boys to send a message to the whole school that this behavior is very serious.

Rollins and Cressie arrest all three boys while they are in class and everyone watches. Andrew’s mother is very upset that he was arrested in school. Andrew tells Cressie that he and Mandy smoked a joint and then he kissed her. He says one thing led to another and they had sex. He swears it was consensually and that she liked it. Cressie asks why he lied at first and Andrew says he wanted to protect her reputation. At that point, his mother demands a lawyer. Andrew makes bail. Mandy’s families’ car is spray painted and a brick is thrown through their window. Olivia meets with the family to talk about the next steps in the process. Mandy says she is being harassed at school and that she can’t go back. Mandy doesn’t want to testify but her dad insists that she will.

Mandy goes home and posts on her blog that she won’t testify. She has dyed her back and took out her nose ring. She is just going to pretend like the rape didn’t happen. Olivia and Rollins go to talk to Mandy and Rollins shares that when she was a teenager she was called bad names too but she got through it. They try to tell Mandy that she isn’t alone. She cries in Olivia’s arms. Barba sees that the kids at the school have been harassing Mandy but he thinks the rape conviction is the only thing they have.

Olivia shares with Rollins that Noah’s biological grandmother showed up at her door last week and is trying to take Noah away. Just then Rollins gets a text that there is a problem in the squad room. Max and his father are in the office and Max has been beaten up. He says he deserved what happened to him because he told on Andrew. Max and his dad tell Cressie that Max won’t testify against Andrew. Barba says without his testimony they don’t have a case.

Rollins interviews Mandy to see if Andrew texted her. He did and admitted he raped her. Barba interviews Andrew and he admits that Mandy didn’t want to have sex with him. He loved her and just wanted her to love him back. He admits that Mandy did not want to have sex. Andrew agrees to admit in open court what he did. He reads his statement in open court and apologizes to Mandy for lying about her. He tells everyone she was telling the truth. Mandy thanks Olivia for everything. As Olivia leaves court she is served with paperwork that Noah’s grandmother is challenging her fitness as a parent. Olivia holds an open forum at Mandy’s school to help them understand the issues of rape and bullying.