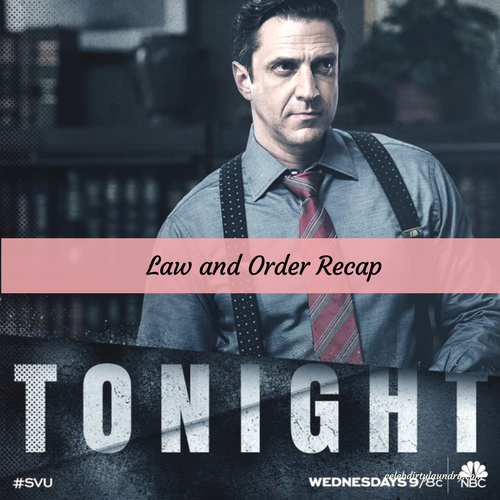 Tonight on NBC Law & Order SVU returns with an all-new Wednesday, April 26, 2017, episode and we have your Law & Order SVU recap below.  On tonight’s Law & Order SVU season 18 episode 16 as per the NBC synopsis, “A news anchor makes an on-air disclosure of rape against her boss, leading Benson and Barba ask witnesses to put their jobs on the line.”

Olivia is sitting on the couch on the set of the local news station. She’s about to be interviewed. She is nervous. Olivia is there to talk about workplace sexual assault. The show also has an actress by the name of Devina, who was raped on the set of a movie. She was performing an unscripted scene and was supposed to act organically. The love scene actually turned into a rape scene. She was too afraid to say anything so she pretended like nothing happened.

The female anchor confesses to being raped to Olivia when the show goes to commercial. One of the producers walks up so she changes the subject. She pretends she needs to go to her dressing room, leaving Olivia standing there.

Olivia heads back to the station where she talks to the team about what she learned about Heidi being raped by her coworker Harold. Heidi will not return Olivia’s calls. A man arrives at the station to talk to Olivia. He saw the news cast. His wife was also raped by Harold and committed suicide. Harold had videos of her and he was blackmailing her.

Fin and Carisi head to the news station to find out the story. One of the producers shares that the man’s wife was up for promotion and didn’t get it, that’s why she committed suicide.

Olivia visits Heidi. She doesn’t want to press charges or do anything. Olivia heads back to the station. The chief arrives he tells her she better have a damn good reason if she is looking into this because the news station is well known for suing the police.

That night, Heidi shows up at Olivia’s. She was passed up for a promotion and replaced with a younger news woman named Marjorie. Harold told her to get down on her knees if she wanted the job that bad.

Next day, Heidi goes to the station to sit down and detail the harassment to Olivia and Allison. For years she was forced to take part in a sexual relationship in order to keep her job. He continuously blackmailed her with videotapes he had of her. She tried to warn Marjorie.

Olivia and Allison had to present Marjorie who has her lawyer with her. They ask Marjorie about what Heidi told her. Marjorie has no idea what they’re talking about.

Fin and Carisi talk to Heidi’s co-anchor involved that Heidi has been off for months.

The chief arrives at the station again. Olivia updates him on the case. He wants to go with her the new station to talk to them. She is insulted that he thinks she can’t handle it. They arrive at the studios to talk to Harold and his lawyer. Harold details a relationship with Heidi that is full of mutual respect. Olivia questions him on certain dates when he was alone with Heidi. Harold acts shocked. Harold accuses Heidi of making up lies because she was passed up for a promotion.

Harold threatens to fill the studios new cycle with stories of Mike’s death and corruption at the precinct. The chief doesn’t back down he will continue to investigate with Olivia

Marjorie goes on here to defend Harold. Olivia’s with Heidi, she is very depressed about what is happening. Marjorie is the only person she confessed to what was happening. Olivia gets a text.  The precinct has a visitor, she is a former news anchor who worked with Harold. She was also raped and harassed by him. Fin comes in.  He has two more women that were harassed by Harold.

The team puts the case together. They are in court. Harold pleads not guilty. The judge will let him out on $2 million bill and he must surrender his passport.

He slew of women record their interactions with Harold. How they were harassed and raped. Motions court begins. Barba fights to have all of the women’s videotaped testimonies included as evidence in Heidi’s case. The female judge declines.

Olivia hits the stand in court. She details her interaction with Heidi in the observation she made of Heidi’s behavior on the day of her interview. Heidi takes the stand next. She details the last time she was raped by Harold. Meanwhile, Carisi gets a text. Heidi’s co-anchor is refusing to testify after Harold threaten to expose his daughter and her drug history.

Marjorie takes the stand. Marjorie tells the jury that Heidi was always happy. Court goes into recess. Heidi sees Marjorie in the home. Heidi goes after Marjorie to ask her if she has a conscience. Marjorie says that she needs to be loyal to Harold. Olivia interjects, telling Marjorie that she is going to be in the same boat if she doesn’t do something now to stop Harold.

Marjorie arrives at Harold’s house. He is already celebrating his victory. Marjorie reminds him that the investigation is an over. But she would like to celebrate. As a show of good faith she would like her tape back from Harold. He tells her that he would never use the tape against her. She gets angry and intern he demand she get on her knees. The next day, Marjorie brings video of the incident to Olivia. Barba shows the tape to Harold and his lawyer.Olivia

Olivia visit Heidi at a construction site. Heidi used her settlement money to build a location to empower women.The chief confesses to Olivia that he has been avoiding SVU because every time he comes in the door he thinks he’s going to see Mike.

The chief confesses to Olivia that he has been avoiding SVU because every time he comes in the door he thinks he’s going to see Mike.