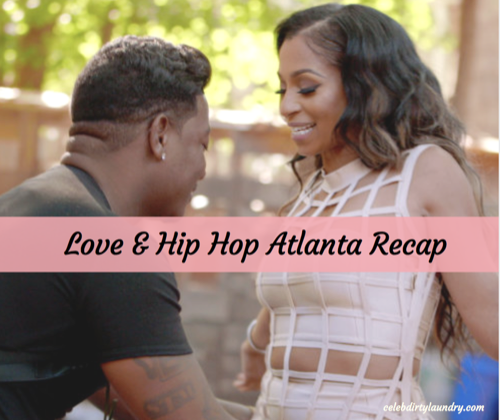 This week on the Love and Hip Hop Atlanta season premiere Joseline is pregnant and happy even though she is worried about taking care of her daughter on her own. She is getting ready to do a pregnancy photo shoot. She says “I realized that I don’t need anyone to help me take care of my baby.” Stevie is wondering whether or not he is the father. He says “Joseline and I were broken up when she popped up pregnant. Now she is playing games, but I don’t believe that I am the father.” Joseline decides to have Stevie served with court papers to force him to take a paternity test to prove that he is the father of her baby. She says “I am going to get the courts involved and Stevie is going to pay child support.

Young Joc has bought a place in the woods and is spending time up there with Karlie Redd. Karlie is wondering where they stand. She wants an apology from Joc and tells him “Before we go any further you need to apologize to me for all of the foolishness that went down a few months ago.” Joc tells her “You need to apologize to me for all of the craziness that you created.” The two of them make a wager and Karlie tells him “If I win I want you to pose naked for the cover of my book.” Joc appears shocked to hear this. He asks her “What kind of book is this?” Karlie tells him “It’s a sex book.” Joc laughs and agrees. He then tells her “If I win and you apologize first I want you up in the treehouse in nothing but a pair of heels.” Karlie agrees.

Mimi is meeting up with Tammy, Rasheeda, K Michelle. Arianne and her new friend Linda to talk over recent events. Melissa tells Mimi “Joseline is having a masquerade ball pregnant belly and all.” Mimi does not seem impressed. She says “Joseline and I do not get along so as long as you don’t talk about me to her everything is fine.” Rasheeda reveals that things are not all well and good between her and Kirk. She tells her friends “He’s complaining that I don’t cook enough or I’m not home enough. I’m trying to run a business.”

Tommie is having her own troubles. Joseline has filed a restraining order on Tommie and now she has called the police who want to interview Tommie about the incident in Miami. Tommie goes to see Stevie and tells him about the situation. Stevie feels caught in the middle because Joseline is the mother of his child, but he also feels a certain sense of loyalty to Tommie. He tells Tommie “Don’t worry about it. Joseline needs to focus on being mommy and you and I will go talk to the police.”

The night of Joseline’s masquerade release party arrives and of course there is much drama. Joc is there talking to a woman when Karlie decides to pop up and see what he is doing. Karlie tells him “I decided to come and see what you were doing and I find you here with another woman.” Joc is quick to correct her. He tells her “I am not here with her. We were just talking and I was congratulating her on her new baby.” Jasmine drops a bombshell and tells Karlie and Joc that she has a baby by Rasheeda’s husband Kirk. This bombshell causes a fight between Joc and Karlie. Karlie says “I am going to stand up for my friend.”

While they are arguing Kirk walks in and Karlie is quick to confront him about what she has just heard. She asks him “Do you know this girl?” Kirk looks at Jasmine and says “I may have seen her around Atlanta.” This response infuriates Jasmine. She asks him “You don’t know me Kirk?” Kirk responds “You know Rasheeda right?” Jasmine tells him “Yes I know Rasheeda.” He tells her “Then you know I’m a married man. Why would you sleep with a married man?” Jasmine asks him “Why would you, as a married man, sleep with me?”

Karlie goes to Melissa’s bar and the two women sit down to talk. Melissa asks Karlie “Why were you at the party? Are you and Joseline friends?” Karlie says “I was there to spy on Joc and I saw him with the girl.” Mimi is there as well. Both women are upset by this whole situation and worried about Rasheeda.
Meanwhile Kirk is on his way home to try and explain the whole situation to Rasheeda before anyone else can tell her.

When Tommie and Stevie go to the police station to try and clear up the mess Tommie ends up being handcuffed and taken to jail. She says “I’m going to do what I have to do to make sure my kids are taken care of and then I am going to bond out and handle this like a lady rather than taking it to the streets.”
Joseline meets up with Stevie to have a talk about the situation with the baby. There is so much tension between the two of that you can cut it with a knife.