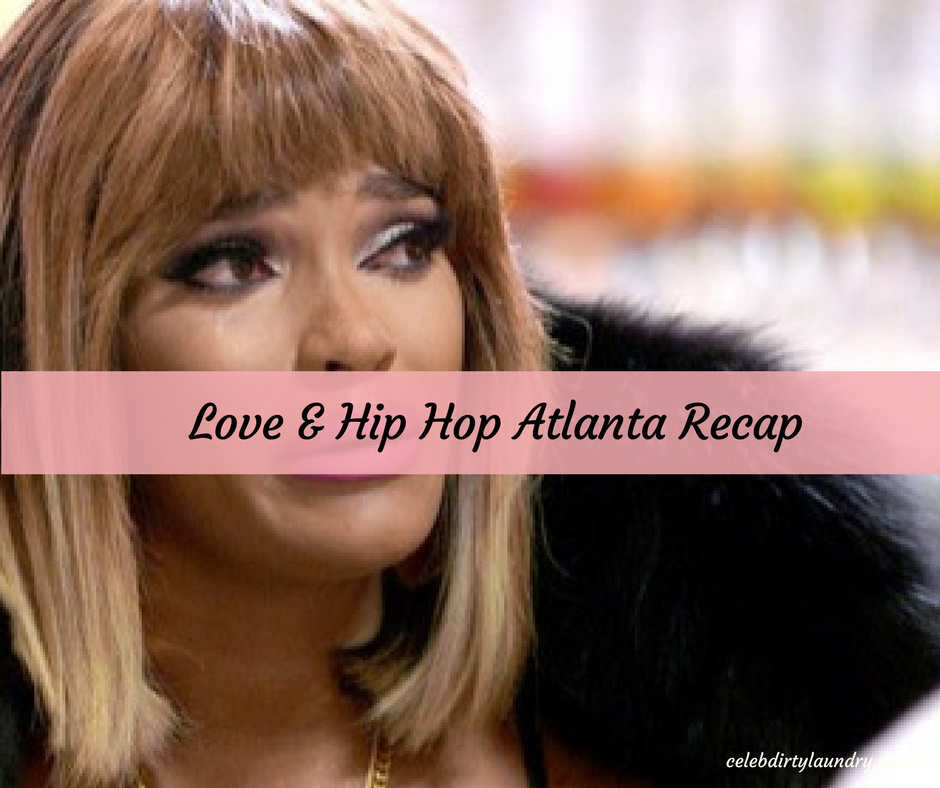 On this week’s episode of Love and Hip Hop Atlanta Joseline and Stevie meet up to have a confrontation about the paternity of her baby. She tells him “I would never lie about who the father of my baby is.” Stevie starts to feel guilty. She tells him “I am moving to Miami.” Stevie is upset when he hears this and tells her “No, you’re not moving anywhere with my baby.” Joseline says “What makes you think you have a say?” Stevie tells her “You may be pregnant with my baby and you are going to stay right here where I am.”

Jasmine meets up with her boyfriend Rod and tells him what happened with Karlie and Yung Joc at the masquerade party. Rod asks her “What does Kirk have to say?” Jasmine says ” Kirk denied even knowing me,” Rod tells her “I blame you. You should’ve kept your mouth shut.” Jasmine tells him “I won’t let Kirk get away with this forever.”

Tommie gets out of jail after being locked up for twenty-four hours. When she gets home she confronts her mother who was staying in her house to help with hereet kids. Tommie tells her mother Samantha “I called you. Why didn”t you answer your phone?” Samantha asks her “When did you try to call?” Tommie gets very upset. The confrontation is on and very heated between the two women. Samantha tells Tommi “I’m your mother. I’ve always been there for you.” Tommie fires back and tells her mother “You have never been there for me. I raised myself.” This infuriates Samantha who leaves Tommie’s house in a huff.

Momma Dee and Ernest are celebrating the release of her second single. Momma Dee is still frustrated with their marital situation. She tells him ” You need to put me first ahead of your mother. She doesn’t do for you what I do for you.” Ernest is frustrated and he reveals to Momma Dee “My mother is selling the house in Florida and moving back to Atlanta,” Momma Dee is less than thrilled to hear this news.

Joseline meets with Dawn and tells her about the meeting with Stevie. Dawn is not happy that she is getting back involved with Stevie. Joseline also tells her “I had to go back over to the house.” Dawn asks “Why?” Joseline says “i had to get DNA. I don’t trust Stevie to go take that test, so I need you to go with me to take this sample and get it tested so that I can have proof that Stevie is the father of my baby.”

Meanwhile, Joc and Karlie are playing super spy with Jasmine and Rod. While Joc and Rod are meeting Karlie is meeting with Jasmine. Karlie wants to talk to this girl before she goes and reveals what she knows to Rasheeda. When the two ladies meet up Karlie is curious to see what evidence Jasmine has that Kirk is the father of her baby. Jasmine shows Karlie videos of her and Kirk together as well as text messages and proof that Kirk has been paying her bills. Karlie is absolutely blown away. Meanwhile, Joc is getting the same information from Rodney.

Momma Dee is on a shopping spree and to try and calm her nerves. She asks Scrappy to meet her and tells him about Ernest’s mother moving back to Atlanta. Scrappy tells her “You’re mad because someone else is doing what you do? It sounds like you need to check your man.” Scrappy then drops a bombshell on Momma Dee. He tells her “Bambi and I may not be getting married. I have been living in a hotel because we have been fighting so much.” Momma Dee decides to arrange a dinner and she tells Scrappy “You bring the Bam and we will get things sorted out because I want you two to work things out.” Scrappy reluctantly agrees.

Tommie is still frustrated after the fight with her mother so she goes to talk to KK about it. She tells her former boyfriends mother what happened the night she was released from jail. KK tells her “Your mother is still trapped in that alcohol addiction and as long as she is things will be tense between you.”‘ They then move on to talk about the situation with Karlie Redd. Tommie says “I’m going to get her. She was fake and pretended to be my friend. I’m going to get her.”

Momma Dee decides to get the whole family together to deal with all of the family issues. She tells Ernest’s mother “I hear you are moving back to Atlanta.” His mom says “Yes I am. Do you have a problem with that?” Momma Dee says “Yes I do because he puts you first.” Ernest’s mom is quick to refute that. Momma Dee pulls out a pacifier and diapers and hands them to Ernest’s mom. She tells her “Here is his pacifier and you can change his diapers because I am done.” Scrappy laughs as Ernest looks on mortified.

Rasheeda has been avoiding everyone since the rumors about her husband surfaced, but she finally decides to meet up with Karlie. Rasheeda tells Karlie “Kirk says he doesn’t know the girl.” Karlie tells her “I met with the girl.” Rasheeda is shocked to hear this. Karlie tells Rasheeda “The girl has videos of her and Kirk together. She has met Carter. She lives in your old building downstairs from you.” Rasheeda is devastated to hear all of this information. She says “This is just too much. I can’t even think that he would go this far.”

When Kirk gets home Rasheeda has dinner ready and she is very upset. As they are sitting down to dinner Rasheeda confronts Kirk and tells him about her meeting with Karlie. She tells him “The girl says ya’ll have been in a relationship and you have been taking care of her and paying her bills.” Kirk says “That’s not true.” Rasheeda then drops another bombshell and tells him “There is also supposed to be a video of you holding her baby.” Kirk seems shocked speechless by this.