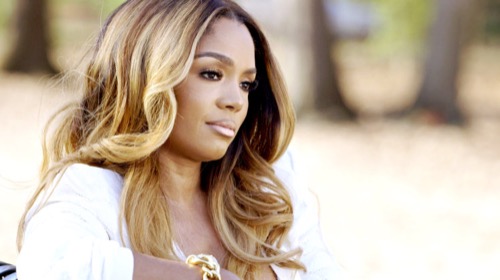 This week on Love and Hip Hop Atlanta Tommie is shocked to see her mom and suspects that KK has something to do with her being there. Samantha seems to be excited to be there for Tommie. Tommie says “The last situation we were involved in was pretty messed up.” Samantha agrees. She says “I don’t want you to feel bad for anything that you did.” Everyone relaxes and has a good time.

Joseline is preparing for the birth of her daughter Bonnie. Dawn and Melissa show up while Joseline is trying to put the crib together. She tells them the results of the paternity test. Joseline says “Now we have to go back to court so I can put him on child support. As far as custody I am going to get 100 percent full custody of Bonnie.” Joseline says “I am also going to move to Miami where Bonnie will have her grandmother and her cousins. I think it’s a good idea. Miami awaits.”

Karlie meets up with Sina. Sina tells Karlie “You know how my baby’s father is. He slept with Jasmine, so I told him that I was dating Rod.” She goes on to tell her that while she was hanging out with Treasure it was revealed that Joc was hanging out with Tommie. Karlie is shocked to hear this. She says “It’s ok. My name is revenge.”

Mimi shows up at Melissa’s house to confront her about the information that she heard at Tommie’s wine tasting. Mimi says “I hear that you were going around doing some kind of recruiting for some kind of video.” Melissa tries to defend herself. She says “Joseline seems kind of different right now.” Mimi gets really angry. She tells her “Joseline has screwed me over a million times and I chose not to deal with her anymore.” Melissa says “You can’t judge me based on other people. I’m not Stevie, Nicco or Joseline.” Mimi says “Arianne told me to watch out for you because you were a slippery slope.” Melissa gets angry and reveals her past with Arianne. She says “Arianne is just mad that we’re not smashing anymore.” Mimi is absolutely shocked to hear this. Melissa tells her “You lucked up when you met me.” Mimi is absolutely appalled. She says “I’m gonna get my lucky ass out of your house right now.”

Jessica Dime goes to see Karlie to reveal the entire truth. She tells Karlie “I been meeting up with people and rekindling things. Joseline and I are cool.” Karlie is shocked to hear this. Jessica then goes on to tell her about the events at Tommie’s wine tasting event. Jessica then says “I do have something else to tell you. Tommie and Joc have been seeing each other.” Karlie says “I know. Sina told me.” Jessica is shocked to hear that Sina and Karlie are cool. Jessica asks her “What are you going to do?” Karlie says “Revenge is sweet.”

Mimi meets up with Arianne. She then confronts her about the allegations that Melissa made. Arianne says “It happened twenty years ago and I felt like it didn’t matter.” Arianne says “Oh so you expect full disclosure from me?” Mimi says “Yes. You knew who this girl was and you didn’t tell me.” Arianne says “I’m not saying that Melissa is a despicable person, but she has despicable ways, and it didn’t take her long for her to show you who she really was.” Mimi agrees with her friend wholeheartedly.

Kirk meets up with Scrappy at The Smoke Ring to talk about the situation with Rasheeda. Scrappy tells Kirk “I’m not trying to get in the business, but I’m looking at ya’ll like Jay-Z and Beyoncee. Do you love Rasheeda?” Kirk says “I love Rasheeda and I love my family and everything we’re doing, but we didn’t get here alone.” Scrappy says “Kirk I think you should do the DNA test and show her that it’s negative.” Kirk says “I’m not going to take the test until I’m ready.” Scrappy says “When you say that it makes it seem like it’s your baby.”

Arianne and Melissa meet up to discuss the situation with Mimi. Arianne confronts Melissa about the comment she made to Mimi about them hooking up. Melissa tells Arianne “You had no right to warn her about me and you never should have told her about us hooking up.” Arianne says “I warned her because you straddle the fence. You know that she is not cool with Joseline. Why would you go against her and be friends with that girl?” Melissa fires back and says “I’ve been friends with Joseline for five years. You’re just jealous.” Arianne tells her “I’m not jealous. Our hook up was a long time ago and I’m over it.” She then gets up and leaves Melissa sitting at the table.

Mimi meets up to talk to Stevie about the situation with Joseline. Stevie confirms that he is the father of Bonnie. Mimi is furious. She tells him “I don’t rock with her. I don’t want her around my child at all.” Stevie says “I got you.” Mimi says “No, I don’t want to hear I got you. I want you to understand me. I don’t want her anywhere near my daughter. If you don’t respect my wishes I won’t have a choice but to put a restraining order on her to keep her away from my child.”

Joc is doing stand up at a club. Scrappy, Tommy and Lovely Mimi are there for support. All of a sudden Karlie shows up with Sina and a whole crew of her friends while everyone is sitting around the table having fun. Karlie asks Joc “Why are you with Tommie here tonight?” The confrontation gets pretty heated from the start. All of a sudden drinks are flying and everyone security has to step in and seperate the ladies.