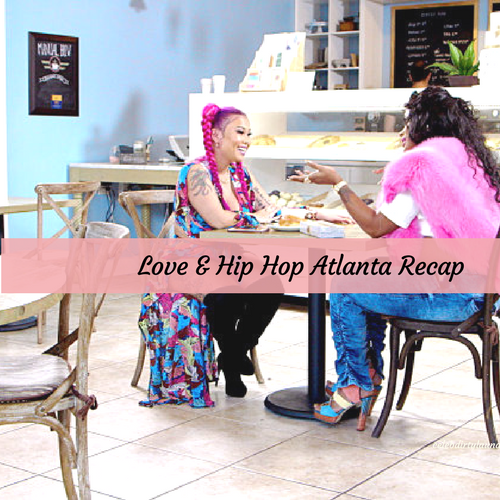 This week on Love and Hip Hop Atlanta Stevie J is meeting up with the guys to hang out and play poker. Stevie tells them all about Joseline serving him with paternity papers. Kirk then opens up and shares the news about Jasmine. He says “She says the baby is mine, but I know I used protection.” Joc speaks up and tells them “I know all about mistakes because I slept with Jasmine too.” Everyone is shocked. Stevie asks Joc “Does that mean that this could be your baby?” Joc says “No. I used protection.”

The guys also reveal to Kirk that Tianna has revealed that she slept with Kirk as well. Kirk is upset when he hears this. He says “Tianna was Rod’s girl, not mine.” The guys then ask Kirk about the situation at home. Kirk says “Rasheeda knows everything and we are living in separate homes. I am doing all I can to get my family back together.”

Joseline meets up with Lovely Mimi. Mimi tells her about going out with Tommie. Joseline tells her “Watch your back with her. She has a bunch of mugshots.” Mimi laughs and decides not to mention her own past. Mimi tells Joseline about getting fired from Sierra’s shop and wanting to open her own shop. She says “I was hoping you could throw some clients my way.” Joseline tells her “I could pay you to do my nails, and then recommend you to some people, but I won’t give you any money.” Joseline then invites Mimi to come to her video shoot and participate. She tells her “You can do the girls nails and build your clientele.” Mimi agrees and seems very excited.

Joc invites Karlie, Sierra and Sierra’s husband Shooter out to dinner to try and make it up to Karlie after dropping the bombshell on her about his sleeping with Jasmine. The date quickly disintegrates as Karlie reveals what Joc has done and an argument ensues between Shooter and Sierra. They leave the table in a huff and Karlie and Joc are stunned. Karlie says “Joc and I may have our problems, but at least we like being around each other.”

Joseline goes to Melissa to ask her to get Mimi and the rest of the ladies to be in the video for her song “Baby Daddy.” Melissa is not sure about this at all. She tells Joseline “These ladies consider you Satan’s spawn. Now you want me to go to them to be in your video? This is not going to go over well at all.”

When Shirleen exits Rasheeda asks Kirk “What do you want to talk about?” He tells her “I came to see what I could do to help us get back on track.” Rasheeda is not receptive to this at all. She tells him “You have made a mess of our lives and now this girl claims to have a baby by you.” Kirk says “It’s a lie. These people are liars and scammers and I am distancing myself from them.” Rasheeda tells him “I don’t know what you want from me.” Kirk says “I think we need to see a marriage counselor.” Rasheeda says “I’m not ready for that yet. I’m still thinking about a separation.”

Melissa calls Tammy and Karlie over to talk to them about appearing in Joseline’s video. Both women are a bit leery about the idea. Tammy says “I want to see the woman that you are talking about.” Tammy says “Let Joseline know that I would be happy to appear in her video, but that I haven’t forgotten about her attempt to blackmail me in New York. I hope her having a baby really has changed her though.”

Jasmine and Rod are looking at a new apartment when Keanna shows up late to the showing. She reveals some interesting information that she received from her ex boyfriend Tango. She tells them ” Tango told me that you are going around town spreading lies that Cannon is Kirk’s baby. They are also showing pictures of Cannon around and saying that Jasmine slept with Joc.” Rod is really upset when he hears this. He asks Jasmine “Is there any truth to this?” She tells him “No, on everything I love.” Rod says “There better not be because I swear if there is I am going to be pissed. We are going to see Joc and straighten this out.”

Moriah is meeting up with Shooter on the low. She tells him “I don’t know what ya’ll have going on at home, but she’s not acting right at work.” It is then revealed that Shooter is sleeping with Moriah and giving her money on the side.

Karlie and Joc meet up with Jasmine and Rod to discuss the rumors about Joc sleeping with Jasmine. Jasmine tells them “First and foremost I will deal with Kirk as I see fit. The paperwork has been filed and he will be served.” They then move on to deal with the rumor that Joc slept with Jasmine. Rod says “I hear you and your friends been spreading alot of rumors.” Jasmine asks him “Have you ever slept with me?” Joc says “I met a young lady named Jasmine. I did have a night with the young lady. I don’t know if you’re the same young lady.” Rod then throws a low blow and brings Joc’s baby’s mom into the conversation. The conversation deteriorates from there and Karlie and Jasmine are quickly at each other”s throats and have to be separated by security.

I did have a night with the young lady. I don’t know if you’re the same young lady.” Rod then throws a low blow and brings Joc’s baby’s mom into the conversation. The conversation deteriorates from there and Karlie and Jasmine are quickly at each other’s throats and have to be separated by security.

Tommie meets up with Treasure to try and clear the air about the other night at the club. The meeting quickly goes south when Treasure gets upset that Tommie called her low. Tommie tells her “You are low. You sleep with married men and have no class.” Treasure comes across the table and the two women quickly begin pulling hair and have to be separated by security.