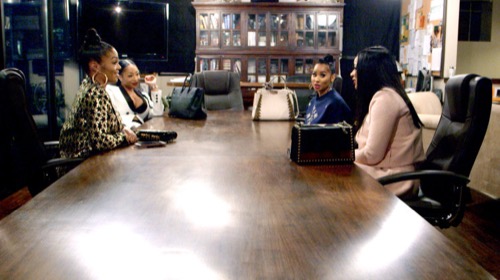 This week on Love and Hip Hop Atlanta Stevie’s daughters are pacing outside the tavern and they are stiil upset. Savana says “I’m only 18 and she is talking about wanting to fight me.” Stevie says “That’s crazy. She should’ve apologized.” Savanna says “The only thing I thought about was you and Bonnie Bella when I reacted that way because I knew that it was going to make it hard for you to see her.” Stevie tells them “Come on. I am leaving here with my two princesses.” Stevie leaves with his daughters and leaves Joseline in the restaurant.

Tommie meets up with Tammy and Tammy tells her about the trip to Jamaica. Tommie agrees to sit down with Jessica after hearing about how Jessica snatched Treasure up at the all white party. Tommie then goes on to confide in Tammy about her issues with her mother. She tells her “I haven’t spoken to my mother since that night at the party. She always tells me I was a mistake. I’ll be the best mistake she ever made, but it makes me feel not loved or wanted and I don’t know what to do.” Tammy tells her “Don’t let anyone define you and decide who you are going to be.”

Kirk has gotten a lawyer to help with the situation involving Kannon. Meanwhile Jasmine has taken Kannon to the DNA lab to get the test done to prove that Kirk, not Logan, is the father of the baby. Kirk confesses to the lawyer and tells him “I got myself involved with some scheming people and they are trying to get money out of me.”

The lawyer says “I don’t know why you don’t want to take a DNA test in order to prove that you aren’t the father.” Kirk says “I want to be able to take a DNA test and prove that the baby is mine.” The lawyer has also drawn up papers to give Rasheeda everything so that she is absolved of anything that may happen in case it comes back that the baby is mine.”

Tammy and Tommie meet up with Jessica and Rasheeda to try and hash out the differences between Tommie and Jessica. Tommie says “I just don’t want to keep talking about Joseline. Every time her name comes up it’s a problem.” Jessica says “It was the way you came at me. Ya’ll can handle your issues like grown people or however you want to, but I didn’t appreciate the way you came at me.”

The meeting quickly deteriorates as tempers become heated between the two ladies. Jessica tells Tommie “If you want to fight we can take this outside because that’s what I do.” Tommie responds “Absolutely.” and once again the two women are squaring off across the table from each other.

The confrontation continues as Tammy and Rasheeda try to seperate them. Eventually security has to come in and seperate them. Tommie is escorted out and Rasheeda and Jessica are left in the room. Jessica is fire hot. She says “How dare Tommie come for me! Who does she think she is?” Rasheeda is upset that it didn’t work out. She says “At least we tried.”
Mimi is angry that Stevie suggested that Savanna or Sade was responsible for Eva being around Joseline. Savanna meets with Mimi and tells her about Joseline wearing a gold band implying that she and Stevie were engaged. Mimi was infuriated. Mimi asks “Did the apology ever happen?” Savanna says “No, she apologized and then she took it back saying that I could never beat her.” Mimi says “I’m sorry this happened. I just hope that your dad wakes up and sees what she’s all about.” Savanna says “If that’s what he wants in his life then fine. I’m just going to take myself and distance myself from him. I just hope that our family, me, you, Sade, Eva and Dorian can stay close.” Mimi tells her “Of course we will.”

Karen meets up with Mona, Deb, Momma Dee and Samantha to talk about Samantha’s relationship with Tommie. Each mother takes a turn talking about how they may have failed as moms. Samantha says “At our last meeting Tommie told me that she loved me but she didn’t want anything to do with me. What can I do to get her to reach out to me?” Momma Dee says “I just bought a new palace and I am having a housewarming party. I want all of you to come and I am going to invite Tommie to.” All of the ladies assure Samantha that they are going to help her work on her relationship with Tommie.

Rasheeda and her mother are on a road trip with Kirk’s other children. She is talking to his 16 year old son Ky about the situation. Ky says “Are you going to be mad about the situation or are you not?” Rasheeda says “So I’m just not supposed to be mad?” When they get to the cabin everyone is super excited and having a great time until they step out on to the balcony and look down. Kirk is standing there.

Stevie meets up with Mimi to talk about the meeting between Joseline and his daughters. Mimi says “Savanna also told me that Joseline proposed to you.” Stevie says “She didn’t propose to me. It was more of a friendship ring.” Mimi doesn’t even want to hear it. She tells him “I went to court to get a protective order and the judge told me that Eva would have to be physically harmed in order for me to get an order of protection.” She goes on to tell him “You signed for 18 years of foolishness with that woman.”

Rasheeda is highly upset to see Kirk. Kirk says “We need a family moment.” Rasheeda says “I get you trying to fix something, but it’s about all of them.” Kirk says “I can’t go back in time and undo things, but I can move forward and protect you so here are some papers regarding our situation.” Kirk then presents her with the divorce papers. Rasheeda asks him “What are you telling me?” Kirk says “I don’t want to drag you into my situation and I just want to protect you from my situation.” Rasheeda says “Is this about the business or are you asking me for a divorce?” Rasheeda’s mom is in the middle yet again. She is trying to get Kirk to take the DNA test and the fight is on once again.