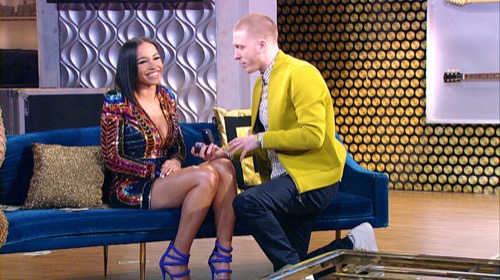 There has been a lot of drama this season on Love and Hip Hop from the issues between Joc and Karlie to the DNA drama between Kirk, Jasmine, and Rasheeda. We have also dealt with Stevie’s issues with Joseline and the birth of their daughter Bonnie Bella ass well as Mimi’s on going hatred of Joseline. This week on the season finale of Love and Hip Hop Atlanta the fight between Kirk and Shirleen continues as she keeps trying to get him to take a DNA test and Kirk is angry and frustrated over the whole situation. Kirk says “Stop messing with me. That’s what I’m saying.” Rasheeda has reached her breaking point. Kirk is still going off. He is screaming at the producers to stop messing up his family. The kids are upset as well and the whole family vacation is ruined.

Momma Dee is having a housewarming party to celebrate her new home. She is also joining with the other ladies to try and reunite Samantha and Tommie as mother and daughter. Ernest is not there because he is still staying with his mom. Tommie and Tammy are on their way to the party. They are talking about the failed intervention between Tommie and Jessica. Tommie says “When I said anyone can get this work it wasn’t a shot at her.”

When Tommie and Tammy walk through the door Tammy sees her mom and Samantha and she immediately senses that something is up. Tammy says “I’m wondering when all these ladies got to be so chummy, but then I realize that this must be an intervention and I don’t think Tommie is going to be too happy about it.”  When Tommie walks in and sees all of the moms she is not happy. KK gets everyone to sit down. Dee tells Samantha “Here’s the rules. You must accept anything and everything that she says with an open heart.” Samantha says “Can I get a hug first?” Tommie tells her “We don’t connect like that. There are no hugs here.”

Samantha tells her “You are very cold toward me.” Tommie says “I don’t know why I am like that, but you made me feel that way.” Samantha goes off on a tangent about how she stole for Tommie and did all of these things for her. Tommie gets upset and tells her mom “It doesn’t matter. You were a bad mom.” Samantha fires back and Deb tells her “What were the rules? No matter what she says you were supposed to take it!” Tammy asks “Have you guys considered red therapy?” Samantha admits that she has. Deb gets upset and tells her “I BURIED MY 10-YEAR-OLD SON AND THEN THREE YEARS AGO I BURIED MY OTHER SON! IF YOU WANT TO KNOW PAIN THAT’S PAIN!”

Stevie is meeting up with Joseline to try and work things out after the mess that she created with his other children. Stevie tells her “When I call and FaceTime to see my daughter I want to see her.” Joseline says “I’ll tell you what. I have to go to New York. You can fly her out there and we can meet and talk.”..

Moriah is still upset about Lovely Mimi telling Sierra that she was sleeping with her husband and ruining her side hustle.  She heads to the new nail salon where Mimi is working to talk to her about the situation. Moriah asks her “So are you and Sierra friends now?” Lovely Mimi says “Who? Oh no we’re not friends. You’re just mad about me telling your secret. You know you never should’ve told me because it was a hot mess.” The conversation quickly breaks down and the two ladies end up yelling at each other.

Rasheeda and Shirleen show up at Press and Kelsie is there. Rasheeda confronts Kelsie about her attempt to get her and Kirk to talk. While they are talking Kelsie tells her “This came for you.” She pulls out an envelope. Jasmine has written her a letter apologizing for all of the things that have happened. She says in the letter “Take a look at the other envelope for some test results.” When Rasheeda opens the envelope inside are the results for Logan and they reveal that he is not the father. Rasheeda says “That puts the bullseye right on Kirk’s back. That’s the end for me.”

Tommie goes to a therapy session with Samantha, but she does not seem open to the process. The therapist says “ Your mother wants to have a relationship with you. Are you open to that?” Tommie says “No. My mother lies and wants a relationship for all of the wrong reasons. There is just so much hurt there.” Samantha tries to speak and reach out to her daughter, but Tommie is not having it. Samantha leaves the room. The therapist goes after her and tells her “Mom you have to feel the pain to heal it.” Samantha goes back into the room and has a total breakdown. She sobs and breaks down begging Tommie to forgive her. Tommie says “I don’t want to act like nothing ever happened anymore.” Samantha agrees and the two women embrace and cry together taking the first steps toward healing.

Savanna and Sade go to an event with Stevie.  Stevie is very upset with Joseline over her behavior. Savanna says “Don’t tell me she’s here.” Stevie says “Who?” He then tells his daughters “I have an announcement to make. Watch this.” Stevie then gets up on stage and introduces Escalita as the first lady of Danger Zone Latina. Everyone, including his two daughters, are thrilled!

Joseline was in New York waiting for Stevie to appear on the Wendy Williams Show with her and Bonnie Bella. When he did not show up she went BALLISTIC and refused to film anymore…