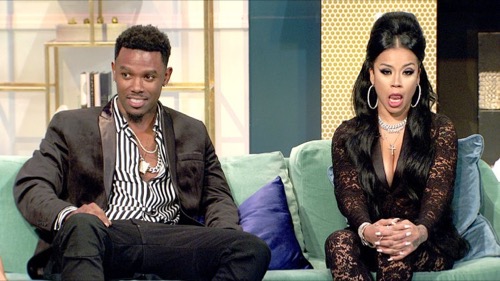 Tonight on VH1’s hit series Love & Hip Hop Hollywood returns with an all-new Monday, October 23, 2017, episode and we have your Love & Hip Hop Hollywood recap below for you.  On tonight’s season 4 episode 16, “Reunion Part 2,” as per the VH1 synopsis, “Keyshia doesn’t think the kiss that Brooke and Booby shared was innocent. Will Keyshia kiss Marcus to even things out?”

Last week on part one of the Love and Hip Hop Hollywood reunion there were shocking revelations and confrontations. Alexis revealed that she was pregnant by the father of Masika’s daughter Fetty Wap and the two women had a verbal smackdown which led to Hazel being removed from the stage and leaving the reunion altogether when she tried to defend Alexis from Masika. The confrontations didn’t end there as it was questioned whether or not Alexis’ baby was truly Fetty’s by Lucci and Alexis had to refute those claims. To cap off an evening of fights and confrontations Zell and Misster Ray came face to face under the ruse of making peace.

This week on part two of the Love and Hip Hop Hollywood reunion Ray and Zell try to mend fences when Zell attacks Ray. Ray yells “I HAVE SOMEONE WAITING FOR YOU! I KNOW WHERE YOU LIVE!” As complete chaos breaks out on the stage. Zell is escorted backstage and out of the building.

When they return Ray has rejoined the cast and everyone is supporting him. Nina asks him “Are you ok?” Ray says “I’m ok. But F him for life.” Nina says “I was caught up in what was happening but I was told that Alexis was laughing.” She asks Alexis “Why were you laughing?” Alexis says “I was laughing at Zell giving him a hug. I’m sorry you got punched in the face.” Ray doesn’t believe her. Nina asks Lyrica “I know Zell is your cousin, How do you feel about what happened?” Lyrica says “It was disgusting and I don’t approve of Zell’s behavior.” Ray says “I do appreciate A1 coming back to my room to check on me.” A1 says “ No problem. You’re a good dude.”

Nina decides to move on. She asks Nikki “Why do you think no one gets along?” As Nikki is trying to answer she is interrupted by Masika and a screaming match breaks out between the two of them. Masika lays down on the floor and tells Nikki “Come and attack me. I’m so afraid I’m shaking in my boots.”

When the reunion returns Nina wants to deal with the situation between Brooke, Marcus. Booby and Bridget. She asks Brooke “Are you wearing panties tonight and is there someone you’d take them off for?” Brooke says “I’m not and I’m not going to have sex until I’m married.” Nina then wants to know about the history between Brooke and Booby. Booby says “The first kiss was the one ya’ll saw. But we do have a history.” Nina asks Bridget “Did you feel some type of way about seeing them kiss like that?” Bridget says “I think there is a gray area and he was ready to take that next step when she was not.” Marcus tells them “The divorce is final.”

Nina moves on to talk about the contentious relationship between Brooke and Bridget. Keyshia moves offstage. Nina asks Brooke “What was more hurtful to you hearing Bridget on your song or Bridget going to Catalina with Booby?” Brooke says “Catalina for sure.” Bridget addresses the situation with Marcus. She says “Marcus should’ve told me that it was his and Brooke’s song.” Marcus says “It wasn’t Brooke’s song it was my song and the show must go on.” Nina asks Booby “How did you feel about going to Catalina with Bridget?” Booby says “Like I dodged a bullet.” It quickly gets heated and Keyshia tells Brooke “You really love this man. Why are you playing games trying to make him jealous?””

When the reunion returns the focus is on the relationship between Teairra and Cisco. Nina asks Teairra “Do you think your relationship with Cisco would have been different if your friends hadn’t interfered?” Teairra says “Yes and no. Some of the things that went on behind my back were not cool.” Nina asks Moniece “How did you feel about talking to Cisco?” Moniece says “I didn’t think it was ok to talk about my friends issues with this man. But I went to the dinner to support my friend.” Cisco says “What ya’ll are seeing right now is one of the greatest BS artist in Moniece Slaughter.” Moniece gets really angry and pops off on Cisco. She has to be taken off stage. Suddenly Nikki and Cisco are having words. Cisco tells her “I don’t know why you’re trying to act like we didn’t have a relationship.” Nikki says “We were friends.” Cisco says “We were more than friends.”

Nina asks Teairra about her drinking. Teiarra says “I am completely sober. I don’t even want to hold a cup even if I’m drinking water.” She also tells Nina “I’m in the studio every day working on my album and my first single will be out in January. It’s called Uber.” Everyone laughs. She tells Cisco “I feel like you played me for national TV.” Nina asks Teairra “How did you feel when you showed up for the surprise party and learned that it was an intervention?” Teairra says “I wondered where my family was.” Cisco breaks in and says “I have to say that I think it was a ploy to get her out of the way by Moniece because as soon as she was gone you were in the studio.” Moniece says “If I wanted to destroy her I would have done it in a million different ways.”

When the reunion returns Nina talks to Safaree and Chanel. Safaree says “The song that we did was hard and it’s popular.” Nina asks Chanel “How did you feel when Hazel said you had to learn a new dance?” Chanel says “I felt like it meant that I had to learn a dance days in advance.” Nina asks Safaree “Why didn’t you step in when things got physical between Chanel and Hazel?” Safaree says “I just felt like it wasn’t my place to get between them.”

Nina moves on to talk A1 and Lyrica about their issues from the season. She asks A1 “Do you think that Lyrica was jealous and that was why she didn’t want you signing any other female artists or was it just about finishing something that was important to her?” A1 says “It was a little bit of both.” Lyrica speaks up and says “We just finished up the album and now we are on a radio tour. He doesn’t have time to work with others right now.” She also says “I have rappers hitting me up to work with them all the time, but he doesn’t let me work with them.” A1 says “I am a songwriter, vocal coach and director. I do it all. You don’t need anyone else.” Lyrica tells them “He has females in his DM wanting to work with him and it would be fine if they had any talent.”

When Love and Hip Hop returns they prepare to say goodbye to Safaree. Nina asks Safaree if he has any final words. He tears up and tells them “I just wanna say that I appreciate all of ya’ll up here. I love you and I’m going to miss you all.”