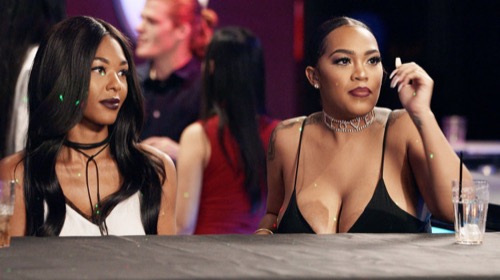 Tonight on VH1’s hit series Love & Hip Hop Hollywood returns with an all-new Monday, August 28, 2017, episode and we have your Love & Hip Hop Hollywood recap below for you.  On tonight’s season 4 episode 7, “Shady Ladies,” as per the VH1 synopsis, “The Hollywood women are forced to pick sides in a war between cliques; Ray J’s effort to develop a sexy new image for Bridget Kelly puts a strain on his marriage; and Moniece squares off with A.D.’s best friend.”

This week on Love and Hip Hop Hollywood Ray has a meeting with Bridget Kelly. He wants to try and help her rebrand her career. Bridget tells him “I want to rebrand my career because I have been branded as an R&B artist.” Ray has her sing a few bars for him and he is impressed. He tells her “I want to put you on the piano in a bikini with a fur on.” Bridget is not feeling it so much. Ray says “We have to take some risks over here.”

Masika and Moniece meet up to dish about Nikki. Masika says “You can’t condemn a woman when you are sleeping with a married man.” Moniece says “I never had a problem with Alexis until she came looking for you. Now she is making friends with our friends.” Moniece then goes on to tell Masika about her issues with AD’s friend Tiffany. She says “AD wants us to have brunch, but my problem is that I think that Tiffany is in love with AD and Tiffany needs to accept that it’s me and not her in the relationship.”

Alexis and Solo meet up to talk about the situation of their break up. Alexis tells him “I don’t think it was cool that you let your baby’s mother disrespect me.” Lucci apologizes to Alexis for that. He tells her “I met up with her later that night and let her know that you were not responsible for the break up of our family and that no matter what we weren’t getting back together again.” Alexis then says “What was the deal with calling me passed around?” Lucci looks sheepish and apologizes. He tells her “No matter what was going on I shouldn’t have said that. I should’ve shown you more respect than that because we did care about each other.” The two hug it out and part ways.

Teairra meets up with Amber to find out what the deal is between her and Cisco. Teairra asks Amber “Have you guys been having sex?” Amber says “Of course we have been.” Teairra tells her “I don’t think any man is worth all of this.” Amber fires back and says “I think he is wonderful.”

Ray meets up with A1 and plays Bridget’s new song. A1  is impressed. He asks “What does princess think about this new artist?” Ray tells him “I have been avoiding Princess because I am trying to build up my sperm count.” While they are talking Princess walks in and is dressed to kill. She wants A1 to leave so that she and Ray can have some alone time because she is ovulating. Ray manages to put her off until the next day when he plans to combine their alone time with his photo shoot with Bridget.

AD and Moniece meet up with Tiffany and the meeting gets off to a rocky start when Tiffany accuses Moniece of not being a lesbian and not taking care of her son. Moniece fires back and tells Tiffany “I take care of my son.” She also tells Tiffany “You are a walking condom.” Tiffany is really offended. She tells Moniece “I’m a stripper. I know a lot of rappers and ball players and I could say a lot about you.” AD steps in and asks Moniece to apologize. Moniece says “I’m not apologizing for anything I have said.” Tiffany buckles down and says “She’ll get an apology when I get one.”At that point, Moniece decides it is time for her to leave…

Princess shows up and is pissed when the room is set up for Bridget’s photo shoot. She tells him “Finish your photo shoot and I’ll be on my way.” Ray is frustrated. Bridget asks him “Why would you do that? Now you set me up for failure.” Ray apologizes and tells her “You look dope though.”

Marcus is still frustrated about his situation with Brooke. He is having a performance and Moniece is there with Nia. Lyrica is there with Alexis and Brooke. Lyrica tells Brooke “I’m only here because A1 made me come.” Lyrica then invites Brooke to her listening party. Lyrica goes over to talk to Moniece and Nia. She invites them to the party. Moniece says “If Alexia is coming to your party then I won’t be there.” Lyrica wants to know what Moniece’s problem is with Alexis. Moniece says “She called me a bitch and she came for Masika. “ After a bit of a heated exchange Lyrica tells Nia “Call me when you’re not with your sidekick.” As she’s walking away Moniece asks “Are we done here? Because I really want to go outside and beat her ass.” Lyrica turns and confronts Moniece again asking “You want to beat my ass? You need to focus on getting in the studio and making some hits.”

Lyrica meets up with Nikki and Alexis to tell them about the incident at Marcus’ listening party. Lyrica says “When I tell Moniece that she is uninvited she calls me a bitch.” Nikki says “This is Hollywood. The land of the fake, the flawed and the phony!” Alexis says “Don’t come for Sky because you will get it back.”

Masika is house shopping and asks her girls to come join her. When Moniece joins her she shows them a video that Alexis has shot on Instagram. The three ladies decide that they are going to take care of business with Alexis and confront her.

Amber and Cisco are laid up together when Teairra shows up. Thie two women decide to confront him. Teairra says “ You’ve been telling me one thing and telling her something else, but look at you now. You have lipstick over your face and forehead so what’s up?” Amber seems supremely confident as she tells Teairra “I don’t feel like I’m going anywhere.” Tiaerra says “I’m done with him.” Finally Cisco speaks up. He tells Teairra “I was telling her that things had to end with her.” Amber seems shocked. She asks him “Are you ending things with me?” Cisco says “Yeah. Out of respect for my relationship with her I have to let you go.” Neither woman seems to be buying it.