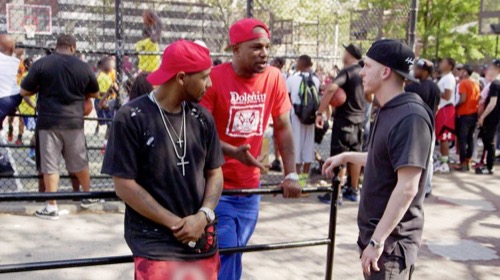 Tonight on VH1’s hit series Love & Hip Hop airs with an all-new Monday, January 9, 2017, season 7 episode 10 and we have your Love & Hip Hop recap below for you.  On tonight’s Love & Hip Hop season 7 episode 10 as per the VH1 synopsis, “Peter Gunz urges Rick to make amends with Cisco Rosado. Later, MariahLynn and Major Galore perform for a shot at Powerhouse; DJ Drewski faces Sky Landish’s trust issues; and Yandy Smith-Harris and Judy Harris confront Erika DeShazo and Samantha Wallace about the tape recordings.”

This week on Love and Hip Hop New York Drewski and Julez meet up at Julez annual basketball charity event. Drewski tells Julez that Sky has moved in. He says “I Put the spy cam up and left my phone out in the open.” Julez says “I don’t think I want to know how this ends.” Drewski says “You know how it ends.” Drewski tells him “You know how it ends.” He then ask Julez “How did you handle it with Kimbella?” Julez tells him “You need to talk to your girl and find out what she wants and needs.”

Rich and Peter meet up at the car show to talk about the situation with Cisco. Rich is not happy. He doesn’t want to talk about Cisco. He says “I don’t want to keep going back to this situation again and again. Cisco has shoved me in a bar and we have come to blows.” Peter tells him “Cisco finally broke it down to me and told me that he was losing his mother.” Rich says “Cisco is always going through something. I don’t want to deal with it anymore.” Peter says “You should say if Peter is willing to sit down with this guy then I am willing to sit down and talk with this guy.” Rich is not hearing that.

Samantha and Erika are at Aseem’s birthday party. Erika tells Samantha “I knew Yandy wouldn’t show up here. She preaches about it being all about the kids, but the kids aren’t here.” Samantha says “It’s not all about the kids. It’s all about Yandy trying to hide the fact that she is an unmarried baby momma just like us.” When Judy shows up at the party Erika asks to speak to her outside. She asks Mendecee’s mom “Why didn’t Yandy come to the party?” Judy says “She wasn’t invited. No one called and told her about the party.” Erika doesn’t believe her. The two ladies begin to argue and Erika bursts out “Did you know that Yandy and Mendecees weren’t married?” Judy says “I’m not going to dignify that comment. Whatever issues you two ladies have with Yandy you need to put them to the side.”

Major Galore is working on her performance for the showcase. She has invited Cisco to watch her rehearsal. She tells him about the Power performance and the competition that Self has brought for the final spot on the pre-show. Cisco is happy to help Major as payback for Mariah choosing Self over him. Cisco tells Major “I was the one helping Mariah when she was struggling. I put food in her refrigerator.” Major says “If your music is on point then why are you leaning on someone else?” Cisco says “Exactly. I am willing to do everything I can to help you.”

J and Snoop meet up to discuss what happened at the launch party for the record label. Snoop tells her “I don’t think we should be business partners anymore.” J is really angry when she hears this. She tells Snoop “I don’t know why you act like this. We have both done things that are wrong, but I was trying to make it right.” All of a sudden J gets fed up and walks away.

Yandy meets up with Judy. Judy tells her about the confrontation that occurred between her, Samantha and Erika at Aseem’s birthday party. Yandy is shocked to hear about the party in the first place. She says “I didn’t get a phone call, an invite or an invite.” After learning about the confrontation Yandy tells Judy about her meeting with Samantha’s best friend KoKo. She says “She sent me thirty digital recordings of Erika and Samantha talking about how they were going to have girls come forward saying they had slept with Mendecees in the blogs and then plant stories in the blogs that I had slept with other men.” Hearing this upsets Judy. She says “I just wish they would go their own way.”

The night of the show between Major Galore and Mariah Lynn arrives. After both ladies perform Self requests Rich’s opinion. Rich says “I liked Major’s record better, but Mariah came ready for war.” Peter seems to agree. As the men are talking Major comes over to join them followed quickly by Mariah. Mariah asks what they thought and Rich repeats what he told Self. Mariah is not interested in Rich”s opinion at all. Major adds her own two cents. She tells Mariah “I didn’t really like your outfit. It looked like you were wearing a diaper.” Mariah fires back and tells her “Well I didn’t know whether you were singing or rapping.” The fight quickly escalates and Major tells Mariah “I heard you were broke and Cisco had to help put groceries in your refrigerator.” This upsets Mariah all the more and she tells Major “I can eat.” Major says “Apparently you can’t.”

Drewski has gotten himself in trouble by posting the video of Sky going through his phone online. Sky tells him “Your job as my man is to make me feel safe. You don’t do that when you do what Drew wants to do.” Drewski says “I am not going to talk to you while you are like this because that”s not how I communicate.” Sky tries to calm down. She tells Drew “You need to respect me as your lady on social media and not post videos like this. If we have a problem come talk to me about it.”

Rich and Cisco meet up to try and hash out their issues. Cisco asks “Are you mad at me Rich Dollaz?” Rich tells him “Yeah, I am mad at you. I have been mad at you for a very long time.” Cisco tells him “You don’t know what I have been going through. I know I have done you wrong and I am coming to you like a man trying to apologize, but don’t you judge me when you have done wrong too.” Rich says “I just want my friend back. We have women coming between us and it is just crazy.” Cisco agrees and tries to hug him. Rich is sad and hugs Cisco, but he is still angry and he storms away.

Self tries to cool things off between Mariah and Major. Almost immediately the two women are at each other. Self has to step in and separate them. Once he sits them down he asks them “How did Cisco get in the middle of this again?” Major tells Self “Cisco is my friend and I invited him to help me. He started telling me about how he helped Mariah Lynn out when she first came to town.” Mariah rolls her eyes. Self says “We all have a common enemy. I am gonna take care of bisco myself, but we all need to get on the same page in order for Gwinnin to be successful. I haven’t even made a decision about the Powerhouse pre-show yet.” Mariah says “I’m with it.” Major agrees as well.

Samantha is in the car when she receives a call from Mendecees. He confronts her about her scheming with Erika. Mendecees tells her “I was sleeping with both of you at the same time and now you two are running around like sister wives scheming against Yandy. You need to stop it.” Samantha does not want to hear it. She tells him “You need to be concerned about all of these children that need a father.”

Yandy and Judy show up at Erika’s shop to confront Erika and Samantha about their schemes to break up Yandy and Mendecees. Yandy tells Erika “I heard all about the plots you and Samantha were hatching to try and break up my family. It’s all on the tape.” Erika laughs and says “If I had a problem with you I would say it to you. I don’t have a problem coming for you so I don’t care what you have on that tape.”

As the two women are arguing Samantha shows up. Erika tells her “These two women think I have brainwashed you into scheming to break up their family.” Samantha laughs and says “Yandy you are a liar.” Yandy looks at her in shock. She asks her “What have I lied about?” Samantha says “Are you and Mendecees married or not married?” Yandy leaps across the counter and takes a swing at Samantha as the fight intensifies. Samantha tells her “You better be careful with those hands because I’ll rip you apart!”