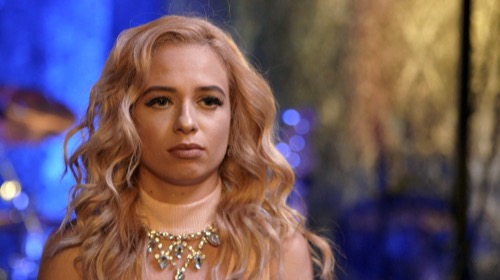 Tonight on VH1’s hit series Love & Hip Hop returns with an all-new Monday, December 11, 2017, episode and we have your Love & Hip Hop recap below for you.  On tonight’s season 8 episode 7, “Slippin,” as per the VH1 synopsis, “Remy takes issue with Papoose’s search for a fertility doctor. Rich and Anais slip up in front of Navarro. After his uncle’s death, Safaree gets back to work. Sophia turns to James R for help with an emergency. Ashley and Ayisha have a sisterly spat.”

This week on Love and Hip Hop New York Remy pops up to listen as Mariah is recording her new record. When Mariah finishes she tells Remy “Self always asks me who it would be my dream to record with and I told him it would be you.” Remy is happy to hear that. She tells her “I have some time today to lay down some tracks.” Mariah is super excited. Then the two ladies sit down to talk about Mariah’s look. Remy tells her “You should go with something simple. Do two braids and do something simple,” Mariah tells her “I am thinking about having plastic surgery because people tell me I don’t have enough boobs or enough ass.” Remy tells her “Don’t change yourself to suit anyone else. Keep that same attitude about your music.”

Papoose meets up with Jacquees. He tells Pap about the incident with Sofia. Pap asks him “Was she honest about where she got the dog?” Jacquees says “She got the dog from James R. She did a video with him and didn’t tell me about it. She told me that she wasn’t doing videos anymore. I heard in the streets that Mariah dusted her up over James so I had to let her go.” Pap tells him “If you think you’re being disrespected then you have to let it go.”

Rich meets up with Anais to continue their affair. While they are together Anais’ phone starts blowing up. Rich asks her “Why is your phone blowing up?” Anais asks him “Why are you worried about what’s going on with my phone?” Rich tells her “This is my time and I don’t want anyone else intruding on my time.” Anais laughs and tells him “You know I’m married so are you prepared to defend us when my husband comes to kick your ass?” Rich laughs and says “If and when that time comes we’ll have to answer for our actions.” Then he pulls Anais into his arms and kisses her.

Safaree is out on the basketball court shooting hoops. He is still reeling from the death of his uncle. Self meets him out there to check up on him. Safaree tells him “My uncle was like my father. Seeing my mother like that tore me up. She couldn’t even go inside.” Self tells him “I lost my mom ten years ago. The one thing I learned was to keep going. I think the best thing you can do is to release the pain through music.” Safaree says “You’re right, but the pain is too fresh right now.” Self says “You’re going to be all right. Just keep your shirt on.”

Navarro meets up with Anais to discuss shooting her next video. Navarro also tells her “I wanted to invite to the naming of a building that they are naming after me.” Anais asks “Is Ashley and her sister going to be there?” Navarro tells her “I don’t know what’s going on with Ashley. She’s usually on top of things and lately, she has been slipping. We all need to be on top of our game.”

Sophia meets up with Jacquees to try and apologize for the incident with James R. She tells him “I’m sorry for springing the dog on you, but I also want an apology from you. You didn’t have to blow everything out of proportion and kick me out of the house.” She also tries to give him a gift for his birthday. Jacquees isn’t hearing any of that. He tells her “You can keep that and your weak apology. I don’t want anything from you.” He walks away and Sofia yells at him “I’m Sofia Bodie bitch I always get what I want!”

Aiyisha is upset because Ashley is not returning her calls and isn’t focusing. Aiyisha goes to Navarro’s office and tells him “I need you to fire Ashley.” Navarro is stunned to hear this. He tells her “I can’t just do that.” Aiyisha is persistent. She tells him “I’m going to call you in the morning and all I want to hear is that Ashley has been fired.”

The creep squad meets up and Jacquees is there talking to them about the situation with Sofia. Rich asks “Are you still with her?” Jacquees says “No. I had to kick her out.” Snoop tells him “Seriously don’t let that sidetrack you though.” Jacquees says “I’m done. I’m focused on the music.”
Mariah goes down to Miami to consult with a plastic surgeon about getting her boobs and butt done. She is still very nervous. The Dr. tells her “You don’t need anyone playing with them for about a month even though you’ll feel better in about a week.” Mariah is still very nervous but the Dr. assures her that they are going to do everything to make sure that she is well cared for.

Sofia shows up at James’ apartment in a panic and tells him “She’s dying.” He asks her “What’s wrong?” Sofia tells him “She was puking and I took her to the vet. They gave her three shots to make her stop puking.” Sofia then tells him “Jacquees kicked me out.” James tells her “One man’s trash is another man’s treasure. You can stay here as long as you like. I’m going to take care of you and the puppy.”

Anais and Rich show up at Navarro’s building naming ceremony together. Navarro discovers that the two have hooked up. He is shocked to hear that. On top of that Aiyasha is on top of him to fire Ashley. Ashley walks up while they are talking. Anais says “Did you know that your business partner and your sister were talking about firing you?” She looked quite pleased to let that little tidbit of information fall into Ashley’s ear. Navarro tries to smooth things over, but Aiyisha says “No. I do want Ashley fired.” Ashley looks pissed!

Ashley wants to know what Aiyisha is talking about. Navarro says “Aiyisha came to the office and wanted to talk about changing your role. The word fire did come up, but I told her that wasn’t happening,” Aiyisha is not pleased. She tells Navarro “Until you fix things we are no longer working,” Aiyisha then storms off.
Safaree takes Self’s advice and channels his pain into his music. He steps out on stage and performs a tribute to his uncle.

Remy wants to know what’s going on with the IVF Dr. Pap tells her “I want to make sure that you are one hundred percent serious about doing this before I make this phone call.” Remy tells him “You only have one task and now I’m wondering who really wants this more.” Remy tells him “I want this. You only had one job to do and you haven’t done it.” The two seem to be completely at odds with this IVF situation.