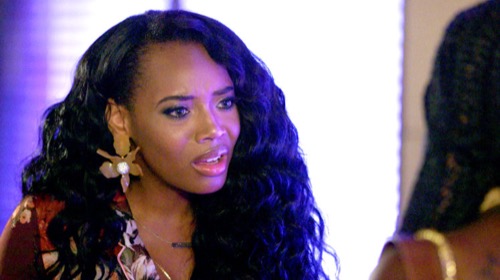 Tonight on VH1’s hit series Love & Hip Hop airs with an all-new Monday, January 9, 2017, season 7 episode 9 and we have your Love & Hip Hop recap below for you.  On tonight’s Love & Hip Hop season 7 episode 9 as per the VH1 synopsis, “Papoose surprises Remy Ma with a gift following her Hip Hop Honors performance. Later, Yandy Smith-Harris meets someone with news about Samantha Wallace; Felicia “Snoop” Pearson and J try to work together and Peter Gunz and Cisco Rosado encounter each other for a second time..”

On this week’s episode of Love and Hip Hop New York Yandy is visiting with Juju. She tells her “I had this phone call with my husband and he is mad with me.” Juju asks her “Why?” Yandy tells her “He is mad that I did not send off the paperwork about our wedding.” Yandy also tells Juju “Samantha’s best friend reached out to me to tell me that she needed to talk to me about little Mendecees. You know that is a soft spot for me.” Juju tells her “You better be careful because that sounds like a trap.”

Remy is meeting with Shy. Pap is still not happy about her hiring a new manager, but when he sees that Shy is pregnant he holds out hope that this will encourage Remy to want to get pregnant. Remy says ” I have 365 days from the day of our wedding to get pregnant. I still have time.”

Cisco is still frustrated about the situation with the creep squad. He goes and talks to Tara about the situation. Tara asks him “Why did you feel you had to take money from Peter?” Cisco says “Peter kind of went a little left talking about the money that I took from him when I stopped the booking.” Tara asks “Why did you stop the booking?” Cisco says “Rich has established himself as my enemy and he is making that clear. Peter laid down with him and that makes Peter my enemy too.” The discussion gets heated between the two of them. Cisco says “I am not going to kiss any of their asses! Not Rich, not Self, not Peter, none of them Tara.” She tells him “Calm down. You can’t let the petty stuff get in the way if you want to fix this. The question is do you want to fix this?” Cisco calms down and says “Yeah.”

Snoop is working with Sofie Green at Premiere Studios. Snoop tells Sofie “I have a lot of people coming through at the showcase and I need your performance to be on point.” Sofie understands. Snoop’s friend Vital is there to give her advice. He tells her “You can’t mix business with pleasure so just make sure J knows her position and everything should be right.”

Self is working with Major Galore who is the first lady of First Lady of Gwinin. He tells her “I have a free slot on the pre-stage.” She seems a little let down. She asks “What is the pre-stage. She reminds him “I am the first lady of First Lady of Gwinin.” Self asks her “Where did all that come from?” Galore tells him “I heard you went to Mariah Lynn’s show and then she was talking major trash about me and I don’t want that around me.” Self tells her that he will deal with it.

Remy is performing at a tribute for Missy Elliot. After she performs Pap prepares her a romantic dinner. He tells her “You killed it.” When they sit down he hands her a gift. When she opens it there is a pregnancy test inside. Remy is not happy. She asks him “What is this?” Pap tells her “I think I hit the home run the other night.” Remy is not happy with Pap’s confidence that he has gotten her pregnant. She tells him “I will take a pregnancy test when we get back and let you know the results, but until then leave it alone.”

Mariah meets up with Self. He tells her “I was really dumbfounded by the whole Cisco thing. I wanted to know why you would go to an outsider to discuss our business?” Mariah tells him “At the time I was in my feelings and I was frustrated, but I did sign the contract.” Self goes on to confront Mariah about her comments about Major. Mariah tells him “I never said anything about her, but she has to tread carefully.”Yandy is still a bit

Yandy is still a bit leery about the situation with KoKo. KoKo tells Yandy “I have recorded conversations where Erika is trying to plot and scheme against you. They want to break up your family and keep the children away from you.” Yandy is stunned to hear this. She doesn’t really believe it and says “You are Samantha’s best friend. How do I know you aren’t just plotting with them?” KoKo says “I was in on it with them until Samantha started to change up and switch up on me. They had me thinking you were this terrible person and I want to apologize woman to woman.” The two women exchange emails and Yandy tells her “I want to have everything I can to counter everything they are trying to do. Thank you very much.” KoKo promises to send her the tapes and the two women part ways.

DJ Self has arranged a meeting with Major Galore. He tells her “I have had a conversation with Mariah Lynn.” Major tells him “I’m confused because the last time I saw her she was ripping the contract up in your face.” Self tells her “Mariah has signed the contract and is part of the team. I have asked her here so that you two can work out your differences.” Major is not happy to hear this. When Mariah Lynn shows up there is an imediate battle. Self has decided to give each lady a shot to perform on the Powerhouse stage. As the two ladies are engaging in a verbal catfight Self interrupts and tells them “I have one spot on the Powerhouse Stage. Each of you bring your best song and the Gwinnin team will decide who gets the spot.” Major is not happy to hear this. She says “I thought I already had the spot.” Mariah Lynn tells him “This will only increase the pettiness between us.” Self tells them “I want you to take all that pettiness and put it into the music.”

Snoop’s Gorgeous Gangsta label showcase is a huge success. J’s jealousy issues seem to be resurfacing as Snoop watches Sofie perform. Everyone is having a good time. Yandy comes out to support Snoop and brings Bianca. When the performances are over J confronts Snoop. She yells at her “Don’t walk away from me when I’m talking to you.” Snoop takes her outside. She tells J “I can’t do this. My personal life is handled in my home. This mess on the sidewalk is not cool. I can’t handle this. I’m done.”

Cisco and Peter meet up to try and settle things. Peter tells him “I am here to try and settle things. Either we’re friends or we’re not.” Cisco says “I don’t know where we stand. You came across the table at me over some money.” Peter tells him “You took money from me and my kids. If it was the same situation again and you told me you had the ten grand in your pocket it would be the same thing.” Cisco seems stunned that Peter is being so aggressive. He tells him “I’ll tell you what. If it’s like that I’ll save you the trouble.” He then lunges at Peter. Once again the two men have to be pulled apart by security. Peter says “You don’t want to figure this out brother?”

Cisco says “No one has asked about what has been going on in my life! You talk about your kids. At least you have some. I lost my wife and now my mother.” This stops Peter in his tracks. He asks Cisco “What’s going on with your mother?” Cisco tells him “She’s dying.” Peter is floored. The two men embrace. Peter tells him “I didn’t even know all of that was going on.” Cisco says “You were right to come across the table at me. I shouldn’t have done that. I’ll give you the money back.” Peter says “I don’t want the money back. I want my brother back.” The two men embrace.