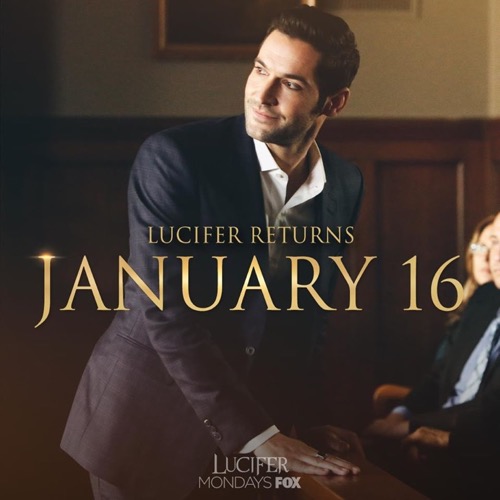 Tonight on FOX their drama Lucifer airs with an all new Monday, January 16, season 2 episode 11 called, “Stewardess Interruptus,” and we have your weekly Lucifer recap below. On tonight’s Lucifer episode as per the FOX synopsis, “Tensions between Lucifer (Tom Ellis) and Chloe (Lauren German) intensify after they have an interrupted “moment,” and impact the investigation of two murders, the victims being former flames of Lucifer’s. Meanwhile, Charlotte (Tricia Helfer) tries manipulating Chloe and Lucifer’s budding romance.”

Lucifer and Chloe had had a moment. They had both realized how much the other meant to them and they had come within inches of kissing each other. But then Jana had ruined everything when she interrupted them. Jana was apparently a flight attendant that liked to “visit” Lucifer whenever she was in town and she had visited Lucifer at the inopportune moment. So Jana had ruined things for Lucifer and she had been undressing herself faster than Chloe could process what was going on however Chloe took Jana’s appearance as a sign and she had told Lucifer that Jana saved her from committing a mistake.

However, Lucifer hadn’t wanted Jana. She had merely been a woman that he sometimes slept with and he had been ready to give up his free love ways once he realized that he loved Chloe. So Lucifer had thrown Jana out of his apartment and he had drunk the night away yet it wasn’t long before Lucifer got a visit from his mother Charlotte. Charlotte had come up with a plan to go back home and she had needed Chloe to fulfill it so Charlotte hadn’t been happy with her son when she found out he had quarreled with Chloe. Chloe was Charlotte’s key to Heaven and she was willing to do anything to ensure Chloe was on her side.

So Charlotte had a mother/son chat with Lucifer. She had told him that she liked Chloe because Chloe had turned down every opportunity to turn on Lucifer and hadn’t risen to the bait. Yet, Charlotte had also stated that Chloe had gone above and beyond to prove herself to him and that he now needed to do the same. Charlotte had told Lucifer that he had to prove himself to Chloe and he had tried to do just that. Lucifer had taken the call for another case and he had tried to prove how much he cared about her. And so Chloe had asked him what had happened with Jana after she left though Lucifer had sworn that nothing happened.

He said that what he had with Jana was over and that he wouldn’t lay eyes on Jana again. Though the problem with that was the fact Lucifer spoke too soon. The latest victim whose murder the duo were going to be investigating turned out to be Jana. Jana had been badly beaten and her body had been found left in a stairwell. So Chloe had had to ask. She had needed to know exactly what happened between Lucifer and Jana because his relationship with the victim had made him a suspect, but then there came another body and Chloe had thought that Lucifer would be rules out as a suspect because the victim was a man. And she had been wrong.

Lucifer had had a sexual relationship with Raj and that had made him look bad. Chloe hadn’t had a problem with Lucifer being bisexual however she did have a problem with him being the only connection between two murder victims. But they both knew that Lucifer couldn’t have possibly kills those two victims and so the only other reasonable explanation for why someone was targeting his exes was because that someone had wanted to keep Lucifer to themselves. So Chloe had Lucifer give her a list of everyone he slept with in the last eight weeks and that had brought in a flood of beautiful men and women.

Lucifer had apparently slept with a lot of people in eight weeks and the worst part about it was that the flood was part of what Lucifer called a drought. However, all of Lucifer’s conquests had more or less said the same thing. They said that their night with Lucifer had been the best night of their life yet it had also been just sex and that Lucifer didn’t mean anything to them. So Lucifer had felt horrible hearing that. He had made him as if no one cared about him as a person and that all they wanted was sex. And so the only person that Chloe called in that had actually cared about Lucifer had been his mother.

Charlotte had been called in because Chloe didn’t believe Lucifer when he said that Charlotte wasn’t his ex. Yet, Charlotte was one of the few people that was interviewed and that had said they cared about him. So Lucifer heard his mother say that she simply wanted the best for him and that she thought Chloe was different than the rest. Charlotte had said that Chloe mattered to Lucifer and that the others were inconsequential though to prove that she had asked Chloe if she had slept with Lucifer and had then bragged about being right because the two not having sex yet meant Chloe mattered to Lucifer.

Though something did come about when Chloe asked Lucifer’s conquests if they noticed anyone watching them when they were with Lucifer. So everyone had told Chloe about Suki Price. Suki was a quiet woman that often stood in a corner of the club to watch everyone and so everyone thought she was creepy, but as it happens Suki was also a stalker. Suki has been stalking Lucifer for a while now and she had a shrine for him in her apartment that Lucifer had first been proud of. Lucifer had thought that there was someone else that cared about him and so he didn’t realize how disturbed Suki was until he saw how much she knew about him.

Suki had been a young woman that had worshiped Lucifer from afar and she had never actually slept with him. She wants to however he had never given her the chance so she satisfies her obsession by stalking him and all of his acquaintances. So Suki who was building a new doll of Lucifer when the victims had been murdered had proven to be a good witness. Suki had known that Jana and Raj were very good friends and that Jana usually crashed on Raj’s couch whenever she was in town. But the picture that Suki had had with both Jana and Raj in had also had a unknown pilot. And so the pilot became a suspect.

Tim Pickman had gotten dismissed from an airline job and had been forced work in much smaller planes yet Tim had been happy to see the police. He had known that both Raj and Jana were dead so he hadn’t wanted to be next. However, Tim had known who was targeting the stewardess and her friend. He had told the police that he had begun taking this guy Burt to all of these places and that Jana was the drug mule not him. Jana was young and attractive so no one questioned her or that thought she was suspicious. So she had been doing great as a mule when a package went missing and Burt freaked out.
Yet, a later sting that was meant to capture Burt had gone awry. Burt had seen a trap right away and he had made sure to wait until he saw one of them alone. So Burt had pulled a gun on Lucifer because he had gotten into an argument with Chloe and she had asked him to leave the van though Lucifer’s powers kicked in without Chloe around and he got the better of Burt. He had used his real face to give Burt a mental breakdown and Burt had been so happy when the police eventually dragged him away from Lucifer. And so Lucifer had saved the day and he had realized that he had used Jana just as much as Burt.

So Lucifer had been sorry that he never took his lovers into consideration when they weren’t in the bedroom and he chose to believe that he could be better than that after his brother had given him so much needed advice, but Chloe had finally seen that she was different to Lucifer and the two of them had finally kissed.