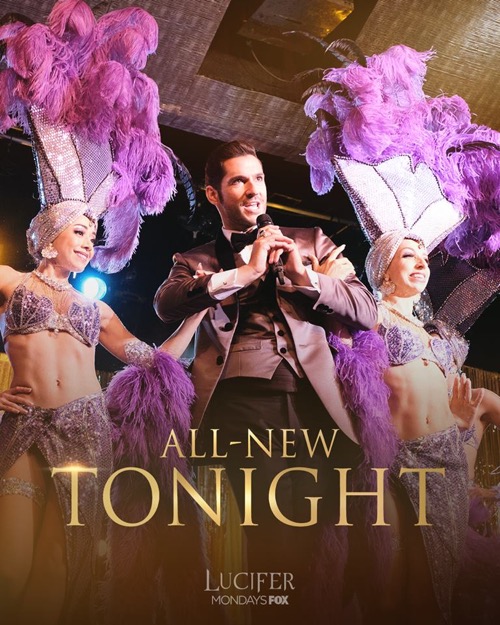 Tonight on FOX their drama Lucifer airs with an all-new Monday, November 6, season 3 episode 6 called, “Vegas With Some Radish,” and we have your weekly Lucifer recap below. On tonight’s Lucifer episode as per the FOX synopsis, “When Lucifer discovers his ex-fake-wife, Candy, has gone missing, he hightails it to Las Vegas with Ella in tow. Together, the two of them work to find her, but interesting secrets are revealed along the way that could compromise the investigation. Meanwhile, Chloe is upset that Lucifer left on her birthday, so Linda tries to lift her spirits.”

The precinct celebrates Chloe’s birthday with song and cake. Suddenly a large cake is rolled in. A stripper pops out. Dan thinks its Lucifer’s doing, but it was Ella. Ella makes it rain from the top railing. A stripper grinds again Chloe. Lucifer gets a call and takes it in another room. His ex-wife Candy is missing. The LA Police Department wants to know if he has seen her.

Ella comes in and Lucifer tells her what is going on. Ella is hesitant about going with him, but she offers him company. She has a few days off.

They arrive in LA at a crime scene. Lucifer sees a body face down on the carpet in a pink dress. Oh no, he proclaims. But after getting closer he has happy. This person has tiny feet. Ella tells him it isn’t time for the pervy stuff. No, he tells her. Candy had boat feet. This isn’t her. They laugh loudly together. The crime scene investigators look at them in disgust.

Ella talks to the detective on the scene. She tells him there is no way Lucifer can be a suspect. He just arrived in town and this body has been deceased for roughly 22 hours. Ella points out to Lucifer that they shouldn’t share that this isn’t Candy because then the real killer will look for her.

Chloe goes looking for Lucifer. She tried calling him several times and he didn’t answer. She stops by Linda’s. They talk. Chloe is on edge and Linda can tell. Linda offers to go to the pen house and check on Lucifer.

Meanwhile, Ella and Lucifer come up with a game plan to find Candy. Lucifer tells Ella he was married to her for 2 weeks. She pick-pocketed him at a bar. He was intrigued by her. He went to go after her and she was talking to a loan shark named Louie. They head to Louie’s. Lucifer is disgusted by his decorating taste but lets it go when they find him dead on the floor. They think through the situation. Maybe Louie’s wife found out about Candy and she is the killer. Lucifer calls her to ask her if she is the killer. Ella tells him that is a dumb idea. She grabs the phone and pretends to be selling something when she hears the background noise – Louie’s lady is playing a famous slot machine Ella is aware of that is at the Moonbeam. They head there.

Linda and Chloe party it up at Lucifer’s. They dance, drink, sing and go through his things. Lucifer calls Linda. She picks up. Chloe stays quiet in the background. He tells Linda he needs to reschedule. Ella comes down the escalator to meet him. Wow, don’t you look ravishing he tells her. Chloe overhears his comment through the phone. He lets Linda go. Chloe is mad. It is her birthday and they have a thing. She thought they had a thing and now he is in Vegas with some mystery woman.

Ella and Lucifer arrive at the casino where Louie’s killer wife is. They find her. Ella thinks she is a pit boss and it is going to be hard to flush her out so they play! Ella plays like a pro while Lucifer drinks behind her. Security arrives and brings them.

In the backroom, they are patted down. The pit boss Roxy comes in. It is Louie’s wife. She calls out Ella for her famous card counting. Ella comes back at her, accusing her of killing Louie.

Linda and Chloe head out to leave when Chloe knocks a painting off the wall. There is a safe behind it. They try to get into it. After they can’t they call Dan.

Roxy admits, under Lucifer’s powers, that she didn’t kill Candy. In fact, there is a golfer at table 4 she has been eying for days. She wants to give him a hole in one. They leave. At a dead end, they brainstorm who the killer could be. Ella asks Lucifer to tell her more about his relationship with Candy. He has a flashback. Candy’s a great con artist with her looks and damsel in distress act. He finally admits to Ella that he married Candy to get over Chloe. A woman comes up to them. It is Candy in disguise. She asks Lucifer what the hell he is doing here?

Candy tells them that the man who wants her father’s club is the killer. Lucifer decides that he is going to make his presence known and become the target.

Hours later, Lucifer takes the stage at Candy’s father’s club. He announces he is the new owner. He sings a number with a dozen showgirls. Ella is one of them! Candy stays in the crowd in disguise keeping watch for the killer.

Dan takes a chunk out of the fireplace trying to get to the safe.

Lucifer is enjoying a drink at the bar. It is quiet and everyone has gone home. Peering into the mirror he sees movement. The bartender comes towards him. He tells him that this is his club. He pulls a gun. He shoots at Lucifer, but it doesn’t do anything. He is confused. Candy comes out appearing in several mirrors. The bartender gets confused. Candy speaks to him. He was like family, like her brother. Ella shoots him from the side as he shoots out all of the mirrors. They get their killer and head home.

Lucifer arrives to find Dan and Linda draped and sleeping all on his couches. Chloe is sleeping in his bed. He talks to her while she is sleeping, but what he doesn’t realize is that she is faking it. He is mad he missed her birthday. Chloe wakes. Lucifer opens the safe and gives her a birthday gift. It is a necklace with a bullet, the same bullet she shot Lucifer with when they first became partners. Chloe laughs and they hug.