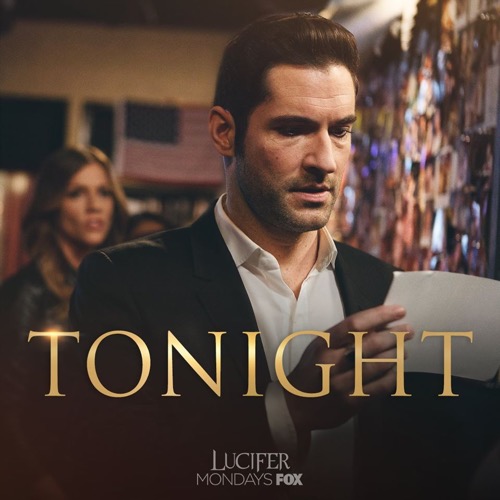 Tonight on FOX their drama Lucifer airs with an all new Monday, January 23, season 2 episode 12 called, “Love Handles,” and we have your weekly Lucifer recap below. On tonight’s Lucifer episode as per the FOX synopsis, “Lucifer (Tom Ellis) and Chloe (Lauren German) go after a masked murderer who is poisoning college students, while at the same time try to adapt to their new relationship. Meanwhile, Charlotte (Tricia Helfer) seeks Linda’s advice on a touchy subject.”

Lucifer and Chloe had finally kissed. But then nothing happened afterwards. Lucifer had later admitted that he wanted to take things slow because things were different with Chloe and she had different responsibilities that made things difficult to arrange however Dr. Linda had called bull on that. She had listened to Lucifer as he described kiss and she had thought his excuses for the snail pace had been his way of stalling things between and Chloe. So Dr. Linda had more or less asked Lucifer what he was afraid and he hadn’t known the answer. Lucifer unfortunately didn’t know what he was afraid and so he tried to run from that as well.

Lucifer had later tried to pretend like it was any other ordinary day and so he hadn’t hesitated about working with Chloe on another case. However, it had been hard for Lucifer to act like nothing happened when Chloe started to act differently. Chloe had patted his butt, laughed at his crass jokes, and had acted like he would have on a case. So Lucifer didn’t know what was wrong with her and the more confused he became was the more Chloe had gotten embarrassed by her behavior though it was hard for them to get back to their normal selves and their latest case was a not a laughing matter.

Chloe and Lucifer were called to a frat house where the victim had apparently been poisoned. The victim’s name had been Ricky Cormier and the poison had killed hadn’t been anything that Ella had seen before. So Ella had thought that was odd and she had been forced to reach out to her old contacts in the forensics world for help. Yet, her old friends hadn’t been able to give her much answers. They hadn’t recognized the poison either and had come up with an antidote by using the victim’s blood to create one. And so the doctors did come up with an antidote though they quickly found out that their killer didn’t want anyone to save their victims.

Some celebrity actor had stopped by the frat house while they were still reviewing the scene and he had told them what really happened. Johnny Kane had told the cops that he had been contacted a day ago by someone that had used his private email and the masked person had told him that if he didn’t cut up his own face that some young college student would die. Though Johnny hadn’t known if the kid was real and so he had verified that Ricky was a student first. Then he had gone home and tried to talk himself into doing what needed to be done, but he didn’t know how to end his own career because that’s what the killer was asking for.

The killer could have played his sick game with anyone however he had contacted an actor in his prime and had made him choose between a stranger’s life and his career. So the killer had clearly picked someone with something huge to lose. But he had sent the email to Johnny using unsecure line and so Chloe was able to trace that. She traced it all the way back to the library at the Malibu University and it turns out it was a misdirect. The killer had hacked someone else’s email to send that cryptic message to Johnny and he wasn’t the only one that had been contacted. The killer had also sent an email to Dr. Gwendolyn Scott.

The good doctor had been asked to choose between a college student’s life and her own hand. However, that decision had been hard for her and she hadn’t felt any better once the cops showed up saying that knew what was happening yet Dan had tried to calm her. Dan had told her that they have an antidote and that they had even found Ashley. So Dan, Lucifer, and Chloe had all thought that they could save Ashley with that antidote and that hadn’t questioned that for a second until the lab results came back with some unfortunate news about how the antidote wasn’t working on Ashley.

Ashley had been drugged with something else and the doctor had found out about that. So a surgeon at the top of her field had told Dan that she needed a glass of water and had then put her hand in the garbage disposer to save Ashley’s life. Yet, the police had figured something out following what nearly happened to Ashley. They had researched her blood as well as the antidote and they had found out that the killer was creating cocktail poisons with their own identity though Ella had performed a similar search of the symptoms they’ve seen and she had found out that the killer was connected to an old case of theirs.

Remember the case where the flight attendant and her best friend had both been murdered because the flight attendant had stolen something from a drug dealer. Well, Chloe had thought it was odd that a drug dealer would go to such lengths for something that could easily be replaceable, but it turns out the missing drugs hadn’t been cocaine and that it had instead been the deadly drug used in the recent killings. So the police found out that drug was highly toxic and that the original strain could kill someone even if they had the antidote. Though the guy that had created it had been a disgraced professor that had turned people into experiments to explain his own actions.

The killer was Dr. Jason Carlisle. Carlisle had gotten into an accident and his car had been one fire however Carlisle had gone back into the car to get his research and had ignored his passenger that would later die. So the video of the incident went global. The research professor had wanted to save the data he had collected and so he had chosen his career over another person’s life. But that decision cost him his job, his marriage, and basically his life. And so that’s why he targeted people. He wanted to prove that anyone else would have made the same choice.

But the found Carlisle at a lab clinic and he had two prisoners. He told the police they could risk walking through poison gas to save the prisoners with the antidote in the middle or they could leave the victims to die. So Lucifer made Chloe go after Carlisle and he had saved the prisoners by walking through the poison gas yet later the two had kissed and Lucifer had been happy about that because he thought their relationship was real. That is until his mother told him that God had put Chloe in his path because that’s when he lost it and had gone to confront Chloe.

Only problem was that Chloe had been affected by the drug – either from when she cornered Carlisle or kissed Lucifer.