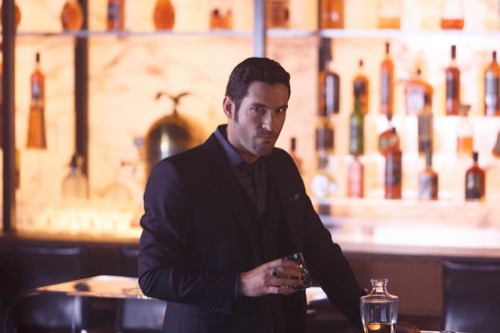 Tonight on FOX their drama Lucifer airs with an all new Monday, January 30, season 2 episode 13 called, “A Good Day to Die,” and we have your weekly Lucifer recap below. On tonight’s Lucifer episode as per the FOX synopsis, “Lucifer (Tom Ellis) seeks an antidote to the Professor’s poison, which sends him on a mission to hell to locate the Professor’s soul. While there, he confronts his guilt about Uriel’s death. Meanwhile, Mom travels to hell to return Lucifer, who feels betrayed by his parents after a revealing discovery.”

Chloe was sick. She had had a nosebleed that didn’t seem normal and she thought that she might have gotten sick from one of Dr. Jason Carlisle’s creations. But Chloe didn’t know how she had gotten sick. She had reminded herself that she hadn’t gotten any flu shots like some of the other doctor’s victims however she did remember that they had struggled for a bit before Carlisle had committed suicide. So Chloe had checked her side where she thought that Carlisle had merely hit her in and she found out an injection mark.

That mark proved that Carlisle had injected her with something yet and unfortunately she didn’t with what. Chloe just knew that she was sick and so she wanted to find answers. However, Lucifer had panicked at the thought of losing her. He didn’t know if Chloe knew that she had been put in her path or not so he didn’t know if she actually had feelings for him yet Lucifer still cared very much about her and he didn’t want her to die. So Lucifer and Chloe drove to police headquarters where they had asked Ella to meet them.

Ella had been studying the poisons that Carlisle had created and she would know better than anyone if he had some leftover antidotes. Yet, Chloe hadn’t wanted to tell Ella that she was sick and so she had told Ella that she simply thought someone else might have been injected. She said that she had gotten a hunch of that despite no one showing at any hospitals to report an illness. So Ella chose to buy her story and she had done her best to help. She had looked into the doctor’s things and she had come up with a name.

Though the name Ella had provided them had needed to be handled gently. The guy had been attending a party and so Chloe had acted like a girl that was interested in him, but before he could even blink he had been thrown into a room with Lucifer and Lucifer had worked his magic on him. So one name led to another and Chloe had wanted to talk to Dave Maddox herself. She knew that Dave had arranged things for people with money and that he had used his art gallery as a way of accepting their cash without raising any red flags.

Sadly for Chloe, she didn’t get around to questioning Dave for herself because her condition had gotten worse. She had passed out and Lucifer had no other choice than to take her to the hospital. But that alerted everyone to her condition and Dan had wanted to help find a cure that could save her. So Dan told Chloe to rest in the hospital and he had gone with Lucifer to speak to Dave however, Dave could only tell the guys what he knew. He knew the names and he knew some of the ingredients.

The formula on the other had died with Carlisle. Carlisle had apparently liked to keep certain information in his head and he hadn’t wanted anyone to find out what he was doing. However, Carlisle’s method of remembering things wasn’t much help to Chloe because the doctors would still need a formula to make sure that they didn’t accidentally kill her. So Lucifer hadn’t been able to face Chloe after barely getting anything from Dave. He had thought he failed her and had punished himself by waiting outside of her room instead of going inside.

The good thing, though, was that his mother was able to see him and talk to him quite freely without. Charlotte had wanted to see her son to make sure if he was alright and so she had tried her best to make him feel better. She reminded him that the person that injected Chloe was suffering in hell and that there was no greater punishment. Yet, they had given Lucifer an idea. Lucifer had thought that he could get the antidote to save Chloe by dying and going to hell. So he had gathered his friends and family to help.

Though his mother was firmly against the idea. Charlotte had told him that he wasn’t risking too much and that there was no guarantee he would ever escape hell again. So Charlotte had ruled herself out, but the others had all chimed in and they had wanted to help. Like Linda for example! Linda had gone to medical school and so Lucifer had wanted her revive him after he died. And so Linda had did some research on google because med school had been a long time ago for her and she had told Lucifer she could help.

So everyone was in on the plan to kill Lucifer however at the last second he had to kill himself. The others had kind of chickened out at that point so Lucifer had zapped himself with the defibrillator and the others kept time. They had waited sixty seconds before time moves much slower in hell and they therefore thought that he would have enough time. But Lucifer had quickly gotten the cure and had gotten stuck in his own hell. Lucifer had found himself replaying the moment when he killed his brother Uriel and there was nothing his friends could do to get him out of it.

His mother on the other hand was different. Charlotte said she knew how to fight the pull that hell had on everyone and so she had volunteered to die in order to rescue her son. So Charlotte had gone to hell and she had talked Lucifer out of his repeating torture yet she had almost gotten trapped down there herself. Charlotte had blamed herself for everything that was happening and for Uriel’s death. And so she had finally been honest with Lucifer. She admitted that she was manipulating him into turning on his father because that was what she needed.

Lucifer though didn’t care. He had grabbed his mother and he had dragged her out of hell before she could punish herself. Yet, saving Chloe hadn’t changed the turmoil that Lucifer was suffering from. He still knew that Chloe had technically been a set up that his father had planned and he couldn’t trust his mother because of what she admitted to him. So Lucifer ultimately chose to walk away from everyone and everything. He had packed up his stuff and had moved out of his club without telling anyone where he was going.