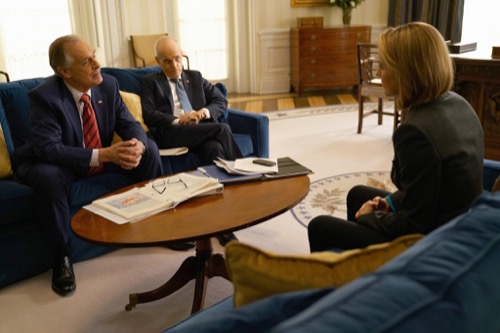 Tonight on CBS Madam Secretary airs with an all-new Sunday, December 17, 2017, season 4 episode 10 Fall Finale called, “Women Transform the World and we have your Madam Secretary recap below. On tonight’s Madam Secretary episode, as per the CBS synopsis, “Secretary of State McCord struggles with the realization that she may need to advise the Afghan government that a compromise with the Taliban may be better than a war with them. Also, Henry uses Dmitri as bait to convince a Russian spy to help the U.S., and Daisy returns from maternity leave and decides to finally tell Joe’s mother about the baby.”

Daisy comes back to work after maternity leave. Liz and the team look at baby pictures. Liz is called to the Sit Room. POTUS and the other leaders discuss their latest mission to take down Taliban leaders.

Henry and his team are working on supplying POTUS with Intel on the Taliban. They discuss a potential Russian spy they are trying to get on their side. Dmitri wants to take a chance and talk to the man. Maybe he can talk him into cooperating with his own story. The team ends their meeting. Dmitri texts Stevie to tell her he has to work tonight.

Matt and Daisy are discussing a few things in her office. He tells her he is thrilled to have her back. He wants to go over some letters and then they can write his speech. Daisy laughs. She is the one that just got back and needs help. Matt asks her if she has spoken to her parents about the baby. He offers up his own crazy family. Anytime she wants to visit. Everyone needs a family. Daisy wants to cry.

Daisy comes to see Liz in the gym. She has spoken to Joe’s mother and she wants to meet the baby. Daisy knows she just got back but she needs one day off. Liz smiles and tells her to take two. Daisy thanks her.

Liz and Henry are in their room talking. She cannot believe he is going to Afghanistan 72 hours before the military operation. She is scared.

Henry arrives in Kabul with Dmitri. They meet with Matvey, who is thrilled to see Dmitri. They chat before Henry tells them they don’t have a lot of time. Dmitri tells Matvey he should share what he knows and they can offer him cash and asylum in the US.

Liz is called to the Sit Room. Henry reports that they have learned that the Taliban is embedded with Afghan troop members.

POTUS meets with the Afghan president. After he gets off the line, he tells Liz and Russell he isn’t confident about the mission.

Henry meets with an Afghan general who dropped his guns for the Taliban. Henry asks him why he would betray his country. How does he think his daughters will live under the Taliban leadership? He was promised that his daughters could go to school and work. They already are being educated. Henry is surprised to hear this. He calls Liz to tell her.

Stevie and Dmitri come out of a restaurant after having dinner. They laugh and walk, stopping to take a selfie together. They say goodnight. Stevie gets into a car. Dmitri looks at the selfie, zooming in. He notices someone in a car who was taking a picture of them. He looks behind him nonchalantly. The car is still there. He begins to walk. They follow.

Henry and his team learn that Matvey never met up with his handler. They went o his apartment where they found him and his girlfriend dead. They had been tortured. Henry tells Dmitri he can take the rest of the day off. Dmitri declines but has to tell him he was followed the night before. Henry wants to know why he didn’t mention this earlier. Dmitri tells him he thought he was being paranoid but now that Matvey has been found dead, he needs to share this information.

Liz meets with POTUS and Russell after speaking with Henry. She informs them that the Taliban is looking for a seat at the Afghan government table. They draw the line at letting women take part in the government decisions. The president and Russell think everything sounds great until they hear about the Taliban’s stipulations regarding women.

POTUS holds a meeting. Everyone is dead set against letting the Taliban take part in the government. They want to continue on with the mission. The president wants to think about it.

Henry learns that the CIA is the ones following Dmitri. It is protocol after an agent completes rehab. Henry reassures the CIA agent that Dmitri is essential in the Taliban mission.

Stevie shows up at Dmitri’s for dinner. He asks her to sit down. They need to talk. Stevie also has something to tell him. He tells her to go first. She tells him she finally feels like herself again now that she is with her. She asks him what he wants to tell her. He tells her it can wait.

Liz meets with the Afghan minister of education at a Women’s Conference to tell her the US has decided to cancel their mission now that the Afghan government has agreed to strike a deal with the Taliban. Liz is reluctant to share the news with the minister who is upset that women will not be able to serve in government. Liz reluctantly takes the stage to introduce the minster. She heads home after, watching Henry at the table with Allison as she studies.