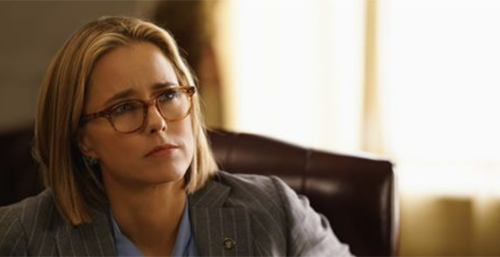 Tonight on CBS Madam Secretary airs with an all new Sunday, October 15, 2017, season 4 episode 2 called, “Off the Record” and we have your Madam Secretary recap below. On tonight’s Madam Secretary episode, as per the CBS synopsis, “Elizabeth is involved in a car accident in Libya when she goes there to help negotiate an end to their civil war and must secure medical care for a gravely wounded local girl who was hit by Elizabeth’s chauffeured vehicle.”

Liz is trying to pick a new kitchen color. Henry doesn’t see the difference in the colors as they chat with Stephanie from college. Jason comes down stairs. He can’t believe they are going to try and paint. He leaves to school. Liz and Henry run upstairs for alone time.

Dmitri is practicing in the mirror. He slams the wall frustrated. He comes out and sees his girlfriend. He hasn’t taken any drugs since yesterday morning, he tells her. He leaves dressed in a suit.

Liz gets in the car with her team. They update her. They have a Libyan civil war on their hands. When she gets into the office, she is told her aid is being pulled. She wants to go to Libya asap. She feels like they can’t afford to lose Libya. Russell reluctantly agrees.

Henry meets with Dmitri. He welcomes him to the agency. Henry tells him his new name is Alex. He introduces Alex to the team. He gives them their mission and leaves them to it.

Ted briefs Liz and her team. They will be leaving in 3 hours. They plan to do a corkscrew landing. Nadine wants to know just how cork-screwy?

Liz heads home to see Stephanie and Henry before she takes off.

Liz makes it off the plane and into a vehicle. It is dark. They are talking about the landing when their driver Joe hits something. Ted gets out of the car and realizes it is a child. Liz jumps out of the vehicle. She demands the medic. Ted begs her to get back into the car. She does.

Stephanie and her boyfriend are painting. They get into an argument about how he feels she jumps through every hoop her parents put in front of her.

Liz gets an update on the little girl, Aya. She has head trauma.

Henry’s team updates him on their selections of individuals that have associated with Taliban that would be possible informant candidates.

The president and Russell talk with Liz. They are pulling her from her trip early.

Dmitri goes out for drinks with the team, minus Henry. When they start making political jokes he becomes visibility upset, referring to all of them as pampered CIA agents.

Nadine visits Aya. She meets with the parents who get devastating news about their daughter. She is going to die within a day because the hospital doesn’t have the equipment to alleviate the swelling in her brain.

Stephanie runs into Alex at a convenient store. They talk for a bit before she takes a call from work.

Liz wants the White House to help transport the little girl to a better hospital.

Liz meets with Libya officials. They cannot come to an agreement on aid. Minutes later she must meet with them after the meeting to beg them to suspend their no-fly zone regulations. They refuse. They are angry that the US has put them in this position.

Dmitri arrives at the office the next day. Henry pulls him in his office. Dmitri apologizes. It won’t happen again. He finally tells Henry that he is addicted to opiates. Henry is stresses and speechless.

Liz arrives to see the parents and Aya as they are about to be transported. Aya’s father doesn’t want to go. He isn’t sure it is safe. Liz says she will go with them to prove it. Ted is angry and tells her she can’t. She talks him into it.

Aya pulls through. Liz also manages to seal the deal for a peace treaty with Libya.
Stephanie comes home to find her mom home. Liz and Henry are painting. They end up in a comical paint fight! Stephanie watches from the stairs.