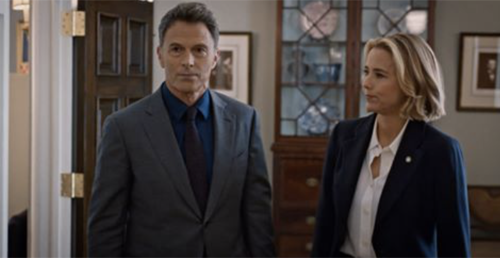 Tonight on CBS Madam Secretary airs with an all-new Sunday, November 12, 2017, season 4 episode 6 called, “Loophole” and we have your Madam Secretary recap below. On tonight’s Madam Secretary episode, as per the CBS synopsis, “Henry disagrees with the President and Elizabeth when they refuse to negotiate with terrorists for the release of an American CIA agent who was captured by the Taliban in Afghanistan. Also, Elizabeth tries to be supportive of Stevie, who is going through a difficult time.”

Stevie finally told her parents the news. It had been sort of hard for her to find them both in the same place what with everything that was going on at work. But Stevie caught one of those rare moments when both were at home and finally told them that things were over with Jareth. Jareth had had enough of the fighting and had stopped wanting their relationship to work. So Stevie was doing her best to take it easy and not get caught up in what she should or should not have done however her parents were frankly astonished by Jareth’s gall.

They couldn’t believe that Jareth broke up with Stevie. But then again they were Stevie’s parents and thought she deserved nothing but the best. So the two had talked about the break up into work that morning and had only stopped talking about it because of the latest developing news. They had heard from their agent. Nafisa was alive and she had been forced into making a video for the Taliban in which she makes their demands clear. She said that the Taliban were demanding a ransom of a hundred million dollars for her release and that they wanted several prominent prisoners released.

But the United States doesn’t negotiate with terrorists. It was a policy created in such times because they couldn’t afford to let the other side believe they were willing to come to the table over ransom or that the release of enemy combatants was negotiable. So the Dalton administration had found their hands tied. They wanted/needed Nafisa back on US soil though they couldn’t admit that she was one of their agents or that she held valuable information. And so they tried to find a way around the terrorists.

They had talked to some of their allies to see if they could get help with Nafisa’s release and Elizabeth had bent over backward just to get some help if not actual assistance. But Elizabeth kept hitting a wall with the Pakistani Embassy and had her hands full with interoffice drama. She was looking for a new policy advisor and that was proving to be a struggle with Jay taking the lead. He had sort of told Matt that he was considering Ashley Haines and so Matt had been happy about that because Ashley was a friend of his, but Jay had apparently written off Ashley.

He hadn’t told Matt about his decision and therefore Matt had had to hear the news from Blake. But Matt had been so angry about Jay’s decision that he tried to bring up Ashley during a conversation with the Secretary in the break room. So there was some drama behind the scenes that Elizabeth hadn’t been fully aware of however her main concern was Nafisa. Nafisa had sent a hidden message in the video with Morse Code and Henry had been trying to work what it meant when they thought they’d been given a lifeline.

There had been another woman kept in the same holding for a few days as Nafisa and she eventually been released. But the fact she had spent time with Nafisa and could describe the building they were being held in had meant they could track Nafisa without anyone else’s help. So Henry asked the poor woman about everything. The last time she saw Nafisa and if there was any way to describe the area they were in though what the woman remembered were the bombs. There were bombs going off on an almost daily basis and the way she described it had made Elizabeth think of controlled detonations.

Elizabeth had known about an old landmine field that had been left behind by the Soviets after their occupation. But when they sent in US soldiers to supposedly rescue Nafisa, she had already been moved. The house had merely been a torture chamber and the terrorist holding it hadn’t meant to hold it for long. So it was back to the drawing board and Henry had another suggestion. He said that a former Taliban minister was looking to pull away from the organization and was willing to help them with their problem in exchange for a fee.

The minister had wanted fifty million dollars and amnesty. But no one in the administration had been willing to agree to that and so Henry’s suggestion had gotten shot down yet he had blamed his wife for that. He thought she could have supported him more in the meeting and she hadn’t wanted to support him because she had agreed to their policy as it was. She didn’t want to grant a terrorist amnesty or pay him off. So her people had come up with another way. Matt and Jay had gotten so angry at each other that they had been shooting down the other’s idea when they could have been working together.

So Elizabeth eventually pulled Jay aside and had told him to make things clear with Matt rather than just shouting at the other man. Therefore, Jay talked to Matt about how he was both his friend after hours and his boss during the day. But the talk had helped clear things up and so the two men worked out a policy in which India gave Pakistan something and Pakistan gave them something. And most importantly, they received help with rescuing Nafisa.

Nafisa was eventually dropped off by the side of the road and she had told her team where it all went wrong. She said Ossip Bakunin hadn’t turned on her because he had been just as shocked as she was when they got grabbed and he had also been honest with her about who else he was in contact with. But Nafisa also had to tell Henry and the others that Ossip had been killed not long after they had both been grabbed. So there was still a leak inside the CIA and no one knew where it was coming from or what else was at risk.

Dimitri though hadn’t let that stop him from flirting with Stevie afterward and so it seems like Stevie found the perfect way to cap off the end of her relationship with Jareth.

And while no one was looking, Daisy had her baby!