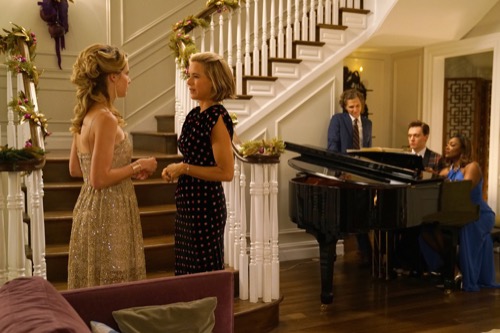 Tonight on CBS Madam Secretary airs with an all-new Sunday, December 10, 2017, season 4 episode 9 called, “Minefield” and we have your Madam Secretary recap below. On tonight’s Madam Secretary episode, as per the CBS synopsis, “Secretary of State McCord reluctantly agrees to host a holiday party in the hopes of persuading senators in attendance to pass a treaty that requires countries to destroy landmines. Also, Henry tries to find evidence that the Senate Majority Leader exchanged information with the Russians.”

The team watches a recent news video of a civilian who stepped on a landmine. She is rescued, but Liz points out that this isn’t always the case. She needs the team to push to ban landmines. With 5 million hits on the news video, she wants to sign a treaty.

Henry is meeting with Russell and the FBI, discussing Beau Carpenter, who is leaking information to the enemy.

Liz meets with the president about landmines. He can appreciate the cause but they have a lot of other legislatures to focus on. He tells Liz she can take it on herself.

Russell suggests that Liz should throw a holiday party if she ever plans to follow in the soot steps of POTUS. She isn’t interested in throwing a party to slap back with everybody.

Liz sits with Jay and Kat to discuss their strategy on landmines and how to get the votes. Blake comes in. He meets Kat but is somewhat intimated by her since his dog likes her better than he. He tells Liz that Becker is who she should be targeting to get the votes. Jay asks her about a holiday party he heard she was throwing. Kat thinks it is a great idea. They can work on getting the votes they need. Liz agrees.

A party planner by the name of Megan shows up to meet with Liz while she is riding to an appointment with Blake. Liz wants a price, but Megan tells her she normally doesn’t discuss pricing so early. Liz asks her to write it down then. They arrive at their destination. Liz says goodbye to Megan and tells Blake she isn’t going to work out.

Liz meets with Gordon to see what the possibilities are with the treaty.

Henry reviews what they have on Carpenter’s associates.

Liz and the team are back together discussing how they can appeal to China to sign the treaty. Stephanie shows up. Because Liz didn’t like Megan he has sent Stevie in her place. Liz cannot believe it. She tells her they can talk tonight at home.

Stevie talks to the rest of the family, prepping them for the party. Liz shows up.

Henry is on a stakeout with the FBI. They spot their suspect Magna who works with Carpenter on a run with 2 guys following her. Henry asks who they are. The lead on the FBI shares it is his guys. Henry is angry.

They take Magna in for questioning. She admits she passes messages for Carpenter to the Russians and vice versa.

They need to get into Carpenter’s house. Henry points out that he is coming to his house tonight for Liz’s holiday party. They can hit his house then.

Stevie presents the party plans and guest list to Liz and her team. Kat loves the tacos while Liz just wants to wrap this all up now and move on. Stevie follows her to her office. She is mad that she has to use her hard-earned money to feed rich people while dressing like a debutante. Stevie lectures her. Liz drops her attitude down a couple notches.

That night, Liz tells Stevie to say that Henry left for a family emergency so that he can take part in a sting on Carpenter’s house. The party starts, and not too long later Carpenter is ready to head home. He is old and tired, he tells them. Liz tries to stall him with the help of her enemy senator Carlos. When the senator has stayed long enough, he tells Liz goodbye. She calls Henry to tell him that Carpenter is headed home.

The men get out just as Carpenter arrives. Meanwhile, Liz is upset she is one vote shy because of Carpenter. She works on Carlos, telling him that the public sees his drive but not his soul. Signing the treaty would help him. He will think about it.

Liz tells Stevie she did amazing work on the party. Stevie thanks her and tells her she needs to leave to meet with Javi. She meets Dmitri. They talk for a bit.

The FBI pulls Carpenter in. They know why he did it – to get his banker son out of trouble. Henry is angry and breaks into the interrogation room. He is angry and tells Carpenter how ashamed he is. How could he get all of those families killed? Carpenter drops down in his chair. He cannot believe what he has done.

Liz holds a press conference with the president. She got her vote. The landmine treaty has been pushed through.